Today, few copies remain in religious institutions, with most now owned by universities, libraries, and other major academic institutions.

The first Gutenberg Bible reached North America in 1847 and is now in the New York Public Library. 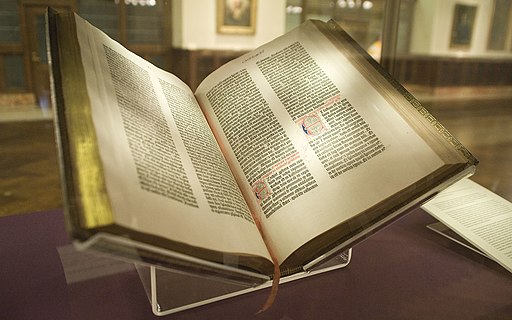 Gutenberg Bible of the New York Public Library bought in 1847; it was the first copy to be acquired by a United States citizen.

The only copy held outside Europe or North America is the first volume of a Gutenberg Bible at Keio University in Tokyo.

The last sale of a complete Gutenberg Bible took place in 1978, which sold for $2.2 million. This copy is now in Austin, Texas.

A two-volume paper edition of the Gutenberg Bible at the Moscow State University was estimated to be worth more than $20 million.

Around 1450, Johannes Gutenberg introduced the first movable type printing system in Europe. He advanced innovations in casting the type.

He introduced adaptations to the screw-press, the use of an oil-based ink, and the creation of a softer and more absorbent paper.

Gutenberg was the first to create his type pieces from an alloy that is still used today.

Also, the metal type pieces were sturdier and the lettering more uniform, leading to typography and fonts.

The high quality and relatively low price of the Gutenberg Bible established the superiority of movable type for Western languages.

The printing press rapidly spread across Europe, and the “Gutenberg Revolution” played a crucial role in the development of the Renaissance, the Reformation, the Age of Enlightenment, and the scientific revolution. 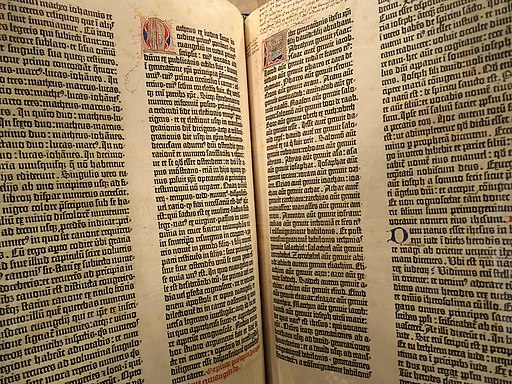 Johannes Gutenberg (1400 – 1468) was a German goldsmith, inventor, printer, and publisher who introduced printing to Europe with the printing press.

His introduction of mechanical movable type printing to Europe started the Printing Revolution.

The arrival of mechanical movable type printing introduced the era of mass communication, which permanently altered the structure of society.

His major work, the Gutenberg Bible was the first printed version of the Bible and has been acclaimed for its high aesthetic and quality.

The Book That Changed the World

The Story of the Gutenberg Bible

How a Gutenberg printing press works

“Give me twenty-six soldiers of lead, and I will conquer the world.”
– Johannes Gutenberg