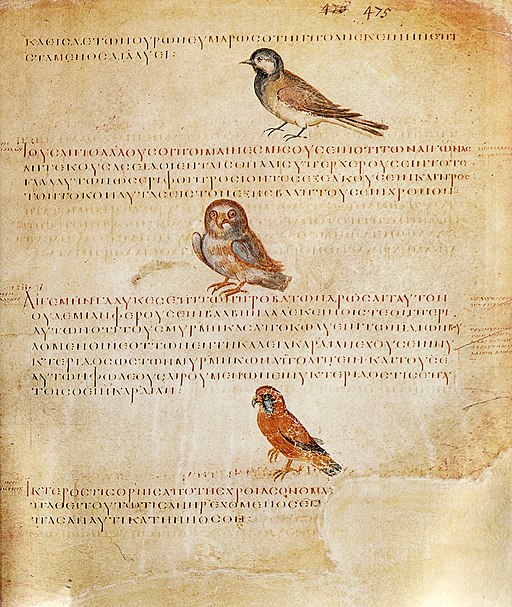 The Vienna Dioscurides is a Byzantine Greek illuminated manuscript copy of “Medical Material” by Dioscorides, which was created in 515 AD. It is a rare surviving example of an illustrated ancient scientific and medical text.

The original “De Materia Medica” or “On Medical Material” was first written between 50 and 70 CE by Pedanius Dioscorides. It is a pharmacopeia of medicinal plants and was widely read and used for more than 1,500 years.

This specific manuscript copy was created in the Byzantine Empire’s capital, Constantinople, for the byzantine imperial princess, Anicia Juliana. She was the daughter of Anicius Olybrius, who had been one of the last Western Roman Emperors.

The manuscript was presented to the princess in gratitude for her funding the construction of a church in Constantinople. The dedication miniature portrait of Anicia Juliana is the oldest surviving dedication portraits in a book.

The portrait has Anicia seated in a ceremonial pose distributing alms. Personifications of “Magnanimity” and “Prudence” flank her. At her feet, another representation, labeled “Gratitude of the Arts,” kneels.

Anicia Juliana (462 – 528) spent her life at the pre-Justinian court of Constantinople, where she was considered the most aristocratic and the wealthiest inhabitant.

The inclusion of the personifications and the putti, shows the endurance of the classical tradition in Constantinople, even though the city and princess were Christian.

Portrait of Anicia Juliana as donor seated between two personifications, Magnanimity and Prudence.

The Vienna Dioscurides, also called Juliana Anicia Codex, has 491 vellum folios measure 37 by 30 cm and contain more than 400 illustrations of animals and plants, most done in a naturalistic style.

The majority of the illustrations were painted naturalistically to help pharmacologists to recognize each plant.

This manuscript is also the oldest surviving illustrated treatise on birds. The birds portrayed throughout the treatise are easily identifiable.

In later centuries, the codex was used daily as a textbook in the imperial hospital of Constantinople. A medieval note records that a Greek nurse at the hospital had it rebound in the early 1400s.

Throughout the Byzantine period, the manuscript was also used as the original for copies of the work that were given to foreign leaders.

Copies were made in Arabic for Abd al-Rahman III of Spain after the Byzantine Emperor Constantine VII sent a Greek copy and a translator.

The manuscript was restored and a table of contents and extensive scholia added in Byzantine Greek minuscule, by the patriarchal notary John Chortasmenos in 1406.

In the mid-1400s, it was used to create the “Pope Alexander VII Dioscorides,” now in the Vatican Library, by the monks of St. John the Baptist Greek orthodox monastery in Constantinople.

After the fall of Constantinople in 1453, a subsequent owner handwrote each plant’s name in Arabic and Hebrew.

The manuscript, still in Istanbul a century after the fall of the city, was purchased from the Arabic-speaking, Jewish physician to Sultan Suleiman the Magnificent, by a Flemish diplomat employ of Emperor Ferdinand I of the Austrian Habsburgs.

After residing in Constantinople for a thousand years, the text passed to the Holy Roman Emperor in Vienna in the 1500s.

Illustration from the Vienna Dioscurides
– After the fall of Constantinople in 1453,
a subsequent owner handwrote each plant’s name in Arabic and Hebrew.

Pedanius Dioscorides (40–90 AD) was a Greek physician, pharmacologist, botanist, and author of “De Materia Medica” or “On Medical Material,” a 5-volume Greek encyclopedia about herbal medicine and related medicinal substance.

De materia medica was widely read for more than 1,500 years, making it one of the longest-lasting of natural history books.

The work describes many drugs, including aconite, aloes, colocynth, colchicum, henbane, opium, and squill. About 600 plants are covered, along with some animals and mineral substances, and around 1000 medicines made from them.

Dioscorides had a significant and long-lasting effect on Arabic medicine as well as medical practices across Europe. “De Materia Medical” was one of the first scientific works to be translated from Greek into Arabic.

Dioscorides studied medicine at the school in Tarsus. His pharmacopeia refers almost solely to plants found in the Greek-speaking eastern Mediterranean.

The name Pedanius is Roman, suggesting that an aristocrat of that name sponsored him to become a Roman citizen.

“Let food be thy medicine and medicine be thy food.”
– Hippocrates