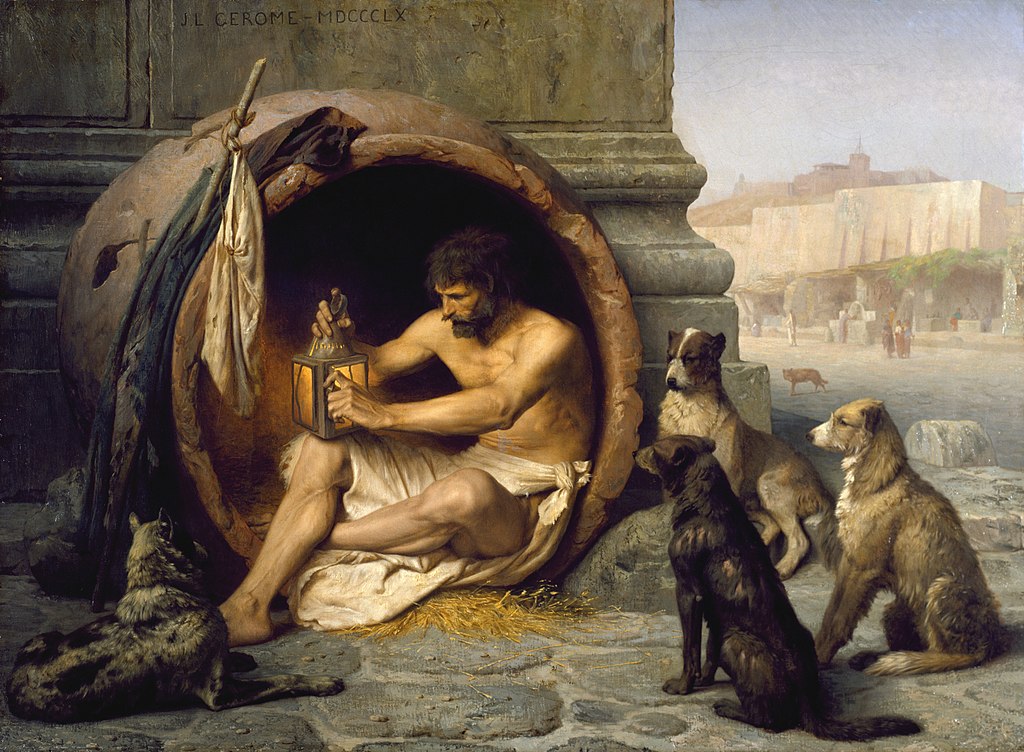 Diogenes by Jean-Léon Gérôme depicts the Greek Philosopher Diogenes (404 – 323 BC) seated in the shelter he used during the night. Diogenes made a virtue of poverty. He begged for a living and often slept in a large ceramic jar in the marketplace.

His companions were dogs that also served as emblems of his “Cynic” (Greek: “kynikos,” dog-like) philosophy, which emphasized an austere existence. Three years after this painting was first exhibited, Jean-Léon Gérôme was appointed a professor of painting at the Ecole des Beaux-Arts. 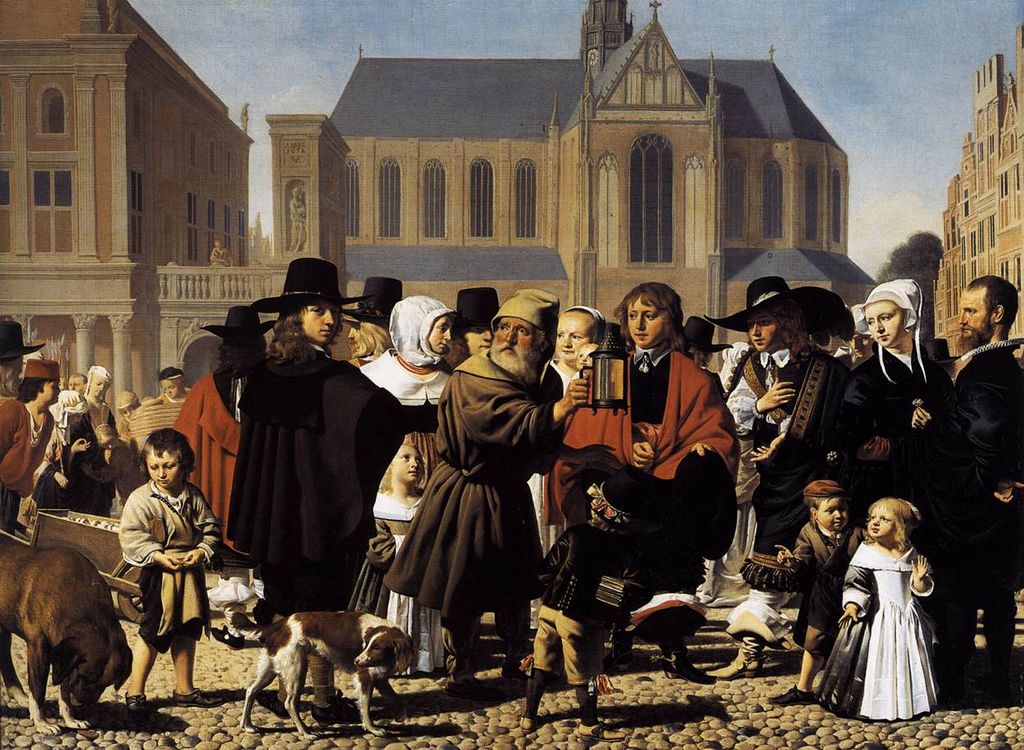 “Diogenes looking for an Honest Man” by Caesar van Everdingen depicts the philosopher Diogenes stands in the middle of a crowd, holding up a lantern. Diogenes claimed that he was looking for an honest man. When he was told that there are people all around in the crowds, he replied:

“I see not one, for there is no reason in your hearts.
You may be men in name, but your brutish lives betray you as animals in reality”.

Caesar van Everdingen set this classic story about the 2,000-year-old Greek Philosopher in a contemporary Dutch town square with portraits of contemporaries, plus he featured the portraits of the family that commission this painting. The large church in the background is the Cathedral of Saint Bavo in Haarlem. Painting in 1652, this theme of “Diogenes looking for an Honest Man,” was widely represented in Dutch art by many artists.

Cesar Pietersz or Cesar Boetius van Everdingen (1616 – 1678) was a Dutch Golden Age portrait and history painter. Most of his art can be found in the museums and private collections of the Netherlands,

More of Diogenes in Art

Diogenes (404 BC – 323 BC) was a Greek philosopher and one of the founders of Cynic philosophy. Diogenes was a controversial figure in Athens and Corinth, where he criticized many cultural conventions of the cities. He believed that virtue was better revealed in action than in theory.

He used his simple lifestyle and behavior to criticize the social values and institutions of what he saw as a corrupt, confused society. He had a reputation for sleeping and eating wherever he chose in a non-traditional fashion. He declared himself a cosmopolitan and a citizen of the world rather than claiming allegiance to just one city.

Diogenes made a virtue of poverty. He begged for a living and often slept in a large ceramic jar in the marketplace. Diogenes became notorious for his philosophical stunts, such as carrying a lamp during the day, claiming to be looking for an honest man. Diogenes was also noted for having mocked Alexander the Great, both in public and to his face when he visited Corinth in 336.

Diogenes passed his philosophy of Cynicism to Crates, who taught it to Zeno of Citium, who fashioned it into the school of Stoicism, one of the most enduring schools of Greek philosophy.

“The foundation of every state is the education of its youth.”

“What I like to drink most is the wine that belongs to others.”

“We have two ears and one tongue so that we would listen more and talk less.”

“Man is the most intelligent of the animals – and the silliest.”

“Blushing is the color of virtue.”

“Why not whip the teacher when the pupil misbehaves?”

“In a rich man’s house, there is no place to spit but his face.”

“Dogs and philosophers do the greatest good and get the fewest rewards.”

“Wise kings generally have wise counselors, and he must be a wise man himself who is capable of distinguishing one.”

“The mob is the mother of tyrants.”

“As a matter of self-preservation, a man needs good friends or ardent enemies, for the former instruct him, and the latter take him to task.”

“I know nothing except the fact of my ignorance.”

“Man is the most intelligent of the animals – and the silliest.”
– Euclid