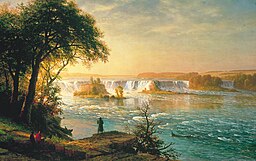 depicts the falls as they appeared before any human intervention and the introduction of the spillway. The natural falls were replaced by a concrete overflow spillway in 1869.

“Looking Down Yosemite Valley, California” by Albert Bierstadt depicts one of America’s most scenic views and was based on sketches made during a visit in 1863. It was the artist’s first large-scale Yosemite picture, a subject for which he would become well known.

Bierstadt painted the valley from a vantage point just above the Merced River, looking due west with the prospect framed by El Capitan on the right, and Sentinel Rock on the left; the spire of Middle Cathedral Rock is visible in the distance.

Yosemite Valley has been inhabited for nearly 3,000 years. Vegetation and game in the region were similar to today; acorns were a staple to indigenous natives’ diet and other seeds and plants, salmon and deer.

Bierstadt took a steamship to Alaska, searching for more rugged landscapes, and ended up shipwrecked in Loring, Alaska.

While sheltering in a nearby Native American settlement, he drew the sea’s shores and his Alaskan surroundings.

“The magnificent beauty of the natural world is a manifestation of the mysterious natural laws that will be forever obscured from us.”
– Albert Bierstadt