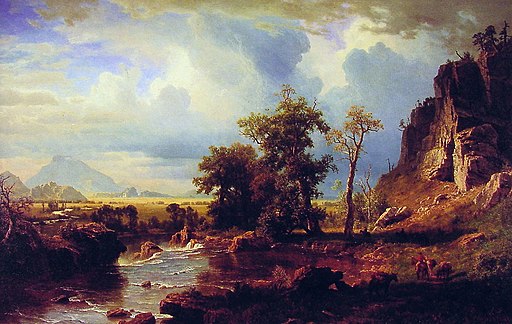 “North Fork of the Platte Nebraska” by Albert Bierstadt

“North Fork of the Platte Nebraska” by Albert Bierstadt reflected the 19th-century American idea of Manifest Destiny. The West represented natural beauty, and the rivers served both obstacles and transportation routes to westward expansion.

The first Europeans to see the Platte were French explorers and fur trappers in 1714.  They first called it Nebraska, a transliteration of the Otoe people’s names, meaning “flat water.”

Bierstadt’s canvases were popular with railroad and mining magnates, based on his vision of the west, which glorified the western frontier and its promise.

His canvases focused on landscape panoramas with mountain peaks shrouded in dramatic mists, the sun exploding on the horizon into cloudscapes churning with pinks, violets, and gold.

Albert Bierstadt was, during his lifetime, one of America’s most popular and successful artists.

The North Platte River is a major tributary of the Platte River and is approximately 716 miles (1,152 km) long, counting its many curves. It travels through the U.S. states of Colorado, Wyoming, and Nebraska.

Manifest destiny was an American cultural belief of the 19th-century United States that American settlers were destined to expand across North America.

It was a general idea rather than a specific policy made with a motto. Ill-defined but keenly felt, manifest destiny complemented other popular ideas of the era, including America’s potential greatness and Romantic nationalism.

While many saw it as American expansionism, be it into Mexico or across the Pacific, others saw the term as a call to be an example for the world.

The belief in an American mission to promote and defend democracy throughout the world, as expounded by Jefferson and continued by Wilson, and later leaders, continues to influence American political ideology.

“Manifest destiny” is sometimes used by critics of U.S. foreign policy to characterize interventions in the Middle East and elsewhere.

“The best material for the artist is the world.”
– Albert Bierstadt