Maria Kauffmann (1741 – 1807), usually known in English as Angelica Kauffman, was a Swiss Neoclassical painter who had a successful career in London and Rome.

She was a history painter, portraitist, and landscape painter. She was one of the two female founding members of the Royal Academy in London in 1768.

Kauffman was born in Switzerland, and then her family moved several times to different Italian cities and then to Austria, where her father was working for the local bishop.

Her father was a skilled Austrian muralist and painter, who was often traveling for his work. He trained Angelica, and she worked as his assistant.

Angelica, a child prodigy, acquired several languages, including German, Italian, French, and English. She was also a talented musician but chose art rather than the opera, which was perceived to have a “reputation.”

In 1765, her work appeared in England in an exhibition, and she soon moved to England shortly after and established herself as a leading artist. While Kauffman produced many types of art, she preferred history painting.

Despite the popularity that Kauffman enjoyed in British society, and her success there as an artist, she was disappointed by the British attitude towards history painting.

Ultimately she left Britain for the continent, where history painting was better established, held in higher esteem.

She retired to Rome, where she befriended, among others, Johann Wolfgang von Goethe. She continued at intervals to contribute to the Royal Academy in London and died in 1807 in Rome.

A unique funeral honored her under the direction of Canova with numerous ecclesiastics and virtuosi, who followed her tomb with two of her best pictures carried in procession.

Self-Portrait by Angelica Kauffman deliberately explores the Italian tradition of portraits by Raphael and the sibyl depictions of Domenichino.

She shows herself as distant and studied casualness while holding a drawing pen and drawing folder, as she looks inquiringly at the viewer.

Angelika Kauffmann had been living in Rome at the time of this portrait and was in her forties.

Her hair is wrapped in a turban, and she is wearing a costume used by Italian artists, which she had also painted several times before. 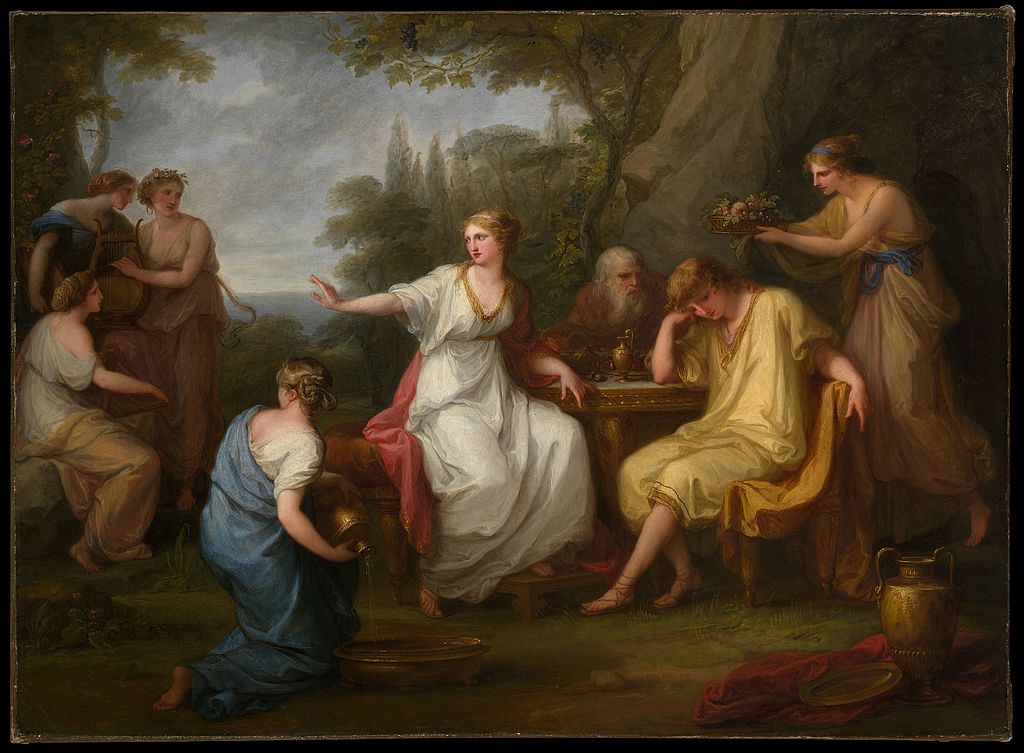 The Sorrow of Telemachus by Angelica Kauffman

“The Sorrow of Telemachus” by Angelica Kauffman depicts Calypso gesturing to her nymphs to stop singing about Telemachus’s father, Odysseus.

Their songs about his father are making him sorrowful. Telemachus was shipwrecked while searching for his father Odysseus and resisted seduction by the sea-nymph Calypso because of his love for the shepherdess Eucharis.

Telemachus was the son of Odysseus (Ulysses in Roman literature) and Penelope, and a central character in Homer’s Odyssey.

The first four books of the Odyssey focus on Telemachus’s journeys in search of news about his father, who has yet to return home from the Trojan War.

Telemachus and Calypso was a French opera, in which the plot is taken from Les Aventures de Télémaque by François Fénelon, itself adapted from Homer’s Telemachy.

The Sorrow of Telemachus 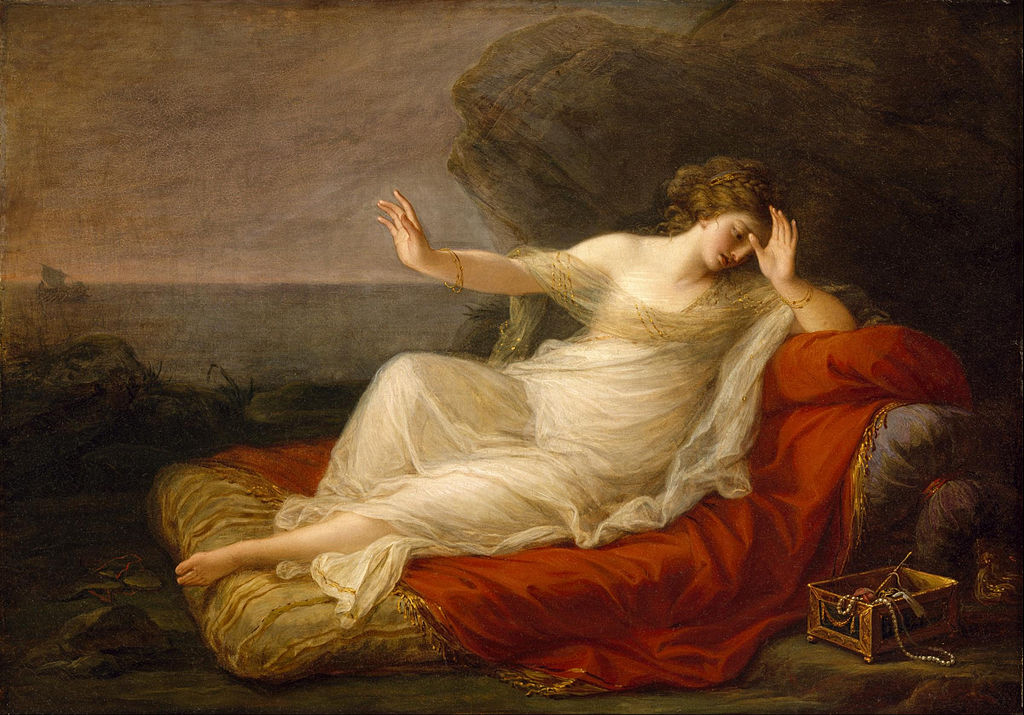 “Ariadne Abandoned by Theseus” by Angelica Kauffman depicts Ariadne, who has been abandoned on a Greek island. Her lover Theseus, whose ship sails away to the far left of the picture, has deserted her.

Ariadne was a Cretan princess in Greek mythology. Ariadne helped Theseus kill the half man half bull Minotaur and then eloped with Theseus, but Theseus abandoned Ariadne.

“Poverty does not terrify me, but the loneliness kills me.”
– Angelica Kauffman