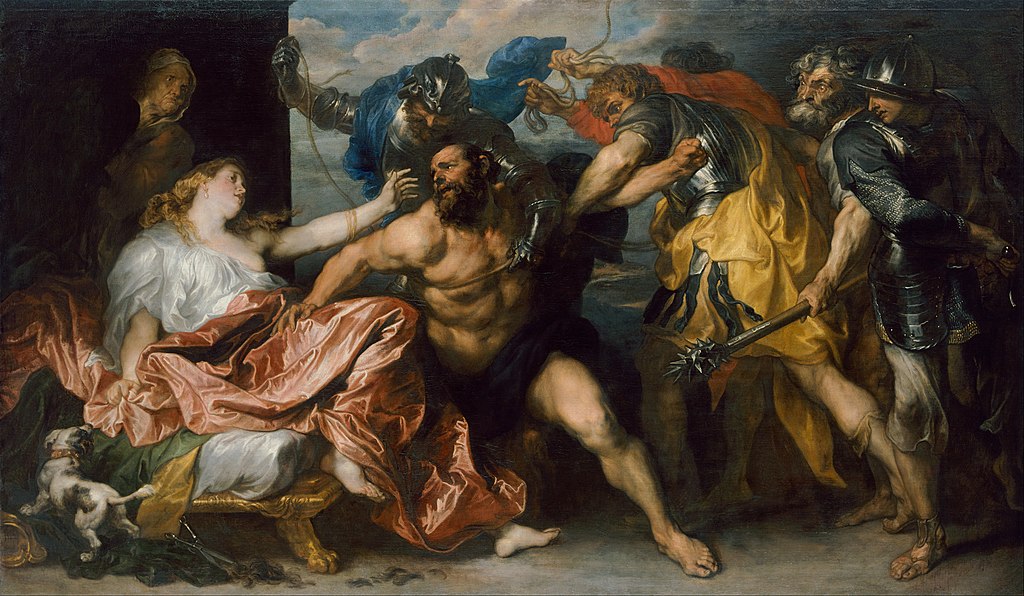 “Samson and Delilah” by Anthony van Dyck depicts the scene after Delila has caused Samson to lose his extraordinary power.

Delila had discovered that Samson’s strength was derived by his long hair, which she cut off while he was sleeping. Without his long hair, his mortal enemy, the Philistines were able to capture him.

This painting was inspired by the episode from the Old Testament story of Samson and Delilah. Samson was a Hebrew hero of the ancient Israelites.

He had been granted immense strength to aid him against his enemies and which allow him to perform superhuman feats, including defeating an army of Philistines.

However, if Samson’s long hair were cut, then his vow would be violated, and he would lose his strength. Unfortunately, he fell in love with Delilah, who betrayed his trust.

Van Dyck was aware of a composition on the same subject by Peter Paul Rubens, his teacher, and role model.

Van Dyck, however, creates a different interpretation, he shows Delilah’s dismay at betraying her lover and her grief over her loss.

Delilah had been bribed by the Philistines to learn Samson’s secret of his great strength. However, she now seems to regret her treacherous act, or at least she is painfully moved by its dramatic consequence.

His lover Delilah betrayed Samson. She ordered a servant to cut his hair while he was sleeping. She then turned him over to his Philistine enemies.

His enemies gouged out his eyes and forced him to grind grain in a mill at Gaza.

After a long period in chains, the Philistines took Samson into their temple of Dagon. They made fun of him, but during their taunting, he was allowed to rest for a short time against one of the support pillars.

Samson sensed his opportunity and prayed to God. He miraculously recovered his strength, allowing him to grasp hold of the columns. Samson managed to tear down te support columns, killing himself and all the Philistines with him.

Delilah was bribed by the Philistines to discover the source of Sampson’s strength. After three failed attempts, she finally seduces Samson into telling her the secret of his power.

He revealed that his power came from an oath to God, never to cut his hair. As he sleeps, Delilah orders a servant to cut Samson’s hair, thereby enabling her to turn him over to the Philistines. 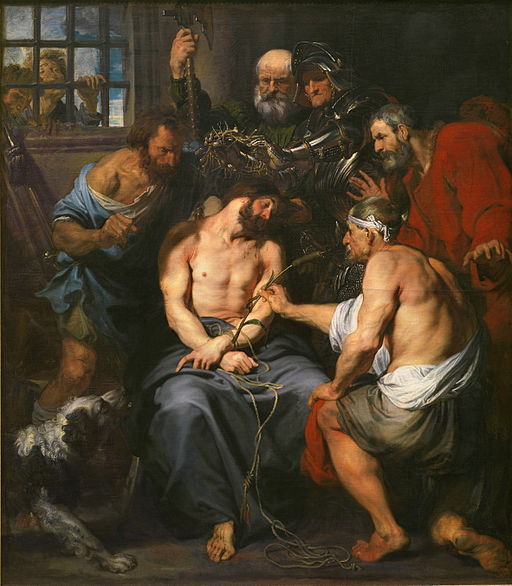 “Christ Crowned with Thorns” by Anthony van Dyck depicts Christ surrounded by figures who are mocking him. An armed soldier is placing the Crown of Thorns on his head.

The executioner is pulling his hair, and another offers him a cane as his scepter. Two other figures watch the scene through a window.

Van Dyck started this painting aged 20 during his first Antwerp period when he was the leading studio assistant and pupil of Peter Paul Rubens.

It shows Rubens’ influence in its chiaroscuro and realistic portrayal of musculature. However, van Dyck seems to have made significant changes early during his stay in Italy, showing the influence of Titian and other Venetian painters in Jesus’ face.

For the Art historians, infrared reflectography and x-rays have made it possible to determine the changes in the scene as Van Dyck experimented and modified the composition in successive stages.

The work was painted in various stages, and the dog and men at the window are later additions to the initial layout.

Even with the naked eye and magnification, a visible trace of earlier painting beneath a layer of paint on a canvas can be seen as in the example of a painted-over foot with toes that can be seen between Christ’s foot and the dog.

Christ on earth; Christ in heaven | The audacity of Christian art 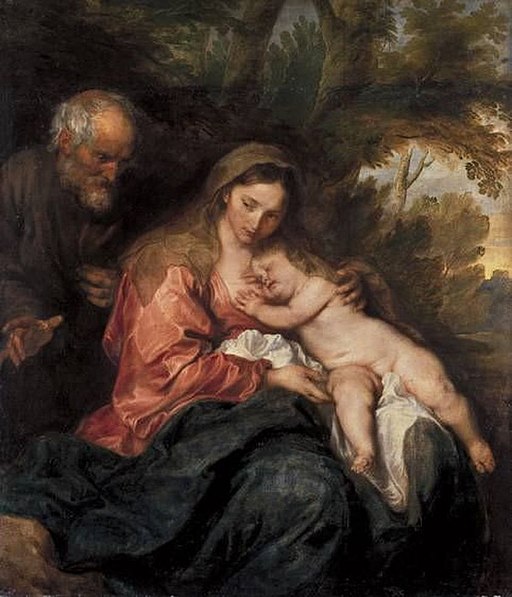 The subject did not develop until the second half of the fourteenth century. It evolved based on the long-standing traditions of incidents that embellished the story of the Flight into Egypt.

The New Testament merely states that it happened, without giving any details.

Sir Anthony van Dyck’s ‘Rest on the Flight into Egypt’

Sir Anthony van Dyck (1599 – 1641) was a Flemish artist who became the leading court painter in England after success in the Southern Netherlands and Italy.

Van Dyck started painting from an early age. He gained early success as a painter, becoming a master in the Antwerp guild in 1618. He worked in the studio of Peter Paul Rubens, who became a major influence on his work.

He is best known for his portraits of European aristocracy, most notably Charles I and his family and associates. He also painted mythological and biblical subjects.

He also painted altarpieces and was an important innovator in watercolor and etching. Charles I granted him a knighthood, and he was buried in St Paul’s Cathedral.

Van Dyck: The Man, the Artist, and his Influence

“A picture is a poem without words.”
– Horace