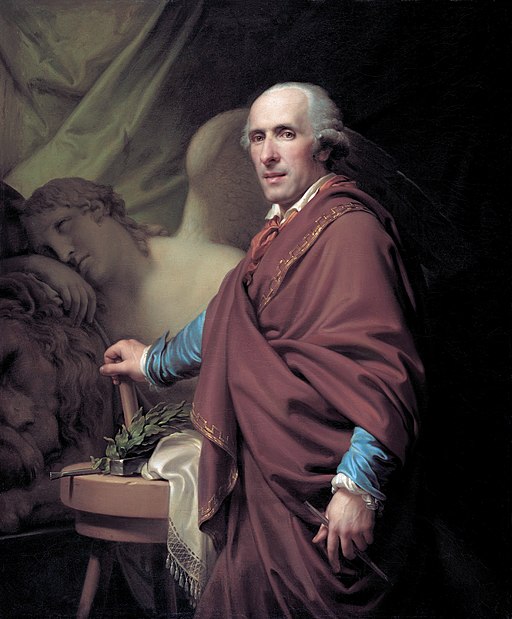 Canova was regarded as one of the greatest of the Neoclassical artists; the Baroque and the Classical Revival inspired his artwork.

A Virtual Tour of Antonio Canova

Canova was a highly recognized successful sculptor, and his skill and talent are evident in his work of “Psyche Revived by Cupid’s Kiss.”

Antonio Canova was born in Venice, where his father was a stonecutter who died when Canova was three years old.

He was put into the care of his paternal grandfather, who was a stonemason and a sculptor who specialized in altars with statues and low reliefs.

His grandfather led Antonio into the art of sculpting. At the age of nine, Antonio Canova executed two small shrines of Carrara marble, which are still in existence.

After this sculpture works, he was employed under his grandfather as a sculptor.

“Psyche Revived by Cupid’s Kiss” by Antonio Canova shows the mythological lovers at a moment of high emotion.

It represents the god Cupid in the height of love and tenderness, immediately after awakening Psyche with a kiss.

The detached draping around Psyche’s lower body, emphasizes the difference between the texture of skin and drapery.

Beautiful curls and lines define the hair, and the feathery details create the realistic wings of Cupid.

The rough stone texture provides the basis of the rock upon which the composition is placed. Museums: Hermitage Museum and Louvre Museum in Paris, France

“The Three Graces” by Antonio Canova depicts the three mythological charities who were daughters of Zeus.

The sky and thunder god in ancient Greek religion, who ruled as king of the gods of Mount Olympus.

The three sisters are identified as Euphrosyne, Aglaea, and Thalia, from left to right. They represent youth/beauty (Thalia), mirth (Euphrosyne), elegance (Aglaea).

Their hairstyles are similar, braided, and held in a knot. A peaceful balance is achieved, as the sisters embrace, united by their linked hands and by a scarf which provides some modesty.

The unity of the Graces is one of the main themes of this masterpiece. Museums:  Hermitage Museum and the Victoria and Albert Museum

Perseus with the Head of Medusa (Metropolitan Museum of Art – MET)

Perseus with the Head of Medusa by Antonio Canova depicts the Greek mythological story of Perseus beheading Medusa. Medusa was a hideous woman-faced Gorgon whose hair was turned to snakes, and anyone that looked at her was turned to stone.

Perseus stands naked except for a cape hanging from his arm, sandals and a winged hat, triumphant with Medus’s snakey head in his raised hand.

This statue is a replica of Canova’s famed marble of Perseus in the Vatican, first shown in 1801.

Based on the Apollo Belvedere, which had been carried off to Paris under Napoleon, it was bought by Pope Pius VII and placed upon the pedestal where the Apollo had formerly stood.

Medusa’s head is based on that of the antique Rondanini Medusa. Museum: Metropolitan Museum of Art – MET

Canova was initially commissioned to depict Pauline Bonaparte fully clothed as the chaste goddess Diana, but Pauline insisted on Venus.

Pauline Bonaparte had a reputation for promiscuity and may have enjoyed the controversy of posing naked.

In this sculpture, the head is a realistic portrait but slightly idealized, while the nude torso is a neo-classically idealized female form and not necessarily based on the Pauline Bonaparte. Museum: Galleria Borghese

“I have read that the ancients when they had produced a sound,
used to modulate it, heightening and lowering its pitch without departing from the rules of harmony.
So must the artist do in working at the nude.”
– Antonio Canova