Berthe Marie Pauline Morisot (1841 – 1895) was an Impressionist painter who exhibited for the first time in the highly esteemed Salon de Paris in 1864.

The Salon was the annual exhibition of the Académie des beaux-arts in Paris.

Her work was selected for exhibition in six subsequent Salons until, in 1874, she joined the “rejected” Impressionists in the first of their shows.

Morisot was married to Eugène Manet, the brother of her friend and colleague Édouard Manet. 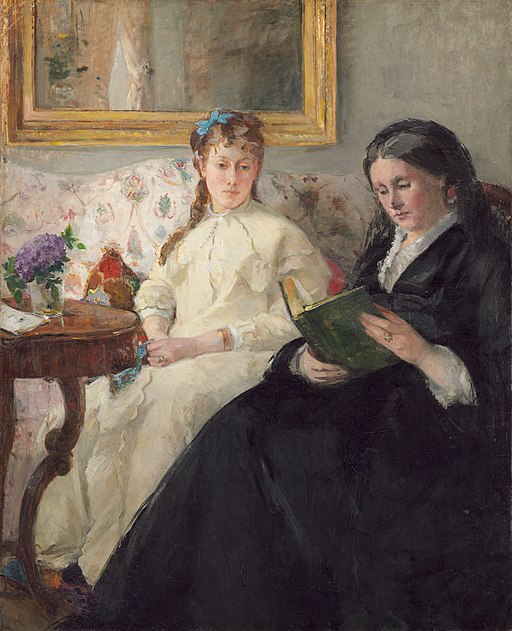 The Mother and Sister of the Artist

“The Mother and Sister of the Artist” by Berthe Morisot depicts a family portrait and an intimate scene, which the artist created when Morisot’s sister stayed with her family in the winter of 1869–1870 to await the birth of her first child.

“Morisot was anxious about submitting the painting to the Salon, and she sought Manet’s advice. Manet saw the painting on the very last day of submissions when he finally visited the Morisot home and studio.

Manet contributed by repainting the figure of the mother. Manet’s contributions can be seen in the mother’s features and dress compared to Morisot’s approach with her sister’s features, the floral upholstery, and the reflections in the mirror.

The Mother and Sister of the Artist

La Coiffure, by Berthe Morisot, depicts a standing woman hairstyling the hair of a seated girl.

Created in 1894, Morisot started to use the technique of squaring and the medium of tracing paper to transcribe her drawing to the canvas exactly.

By employing this new method, Morisot was able to create more complicated interaction between figures in her paintings.

This graphic approach featured by clear lines made her works during this period distinctive.

She stressed the composition and the forms while using impressionist techniques as in this painting.

“Real painters understand with a brush in their hand.”

“A love of nature is a consolation against failure.”

“It is important to express oneself… provided the feelings are real and are taken from your own experience.”

“I love only extreme novelty or the things of the past.”

“My ambition is limited to the desire to capture something transient, and yet, this ambition is excessive.”

Berthe Morisot: A collection of works

“A love of nature is a consolation against failure.”
– Berthe Morisot