Camille Pissarro, throughout his career, painted scenes of landscapes as well as the everyday tasks performed by the rural community. In his early artworks, the agricultural workers in his paintings appear as a natural part of the landscape.

Whereas in his later years, the workers are placed well into the foreground. His paintings focused more on the composition of figures rather than a landscape.

“Hay Harvest at Éragny” by Camille Pissarro is a 1901 painting by the Impressionist painter depicting the hay harvest in the French commune of Éragny-sur-Epte.

Hay since ancient times was cut and dried to be stored for use as animal fodder, particularly for grazing animals raised as livestock, such as cattle, horses, goats, and sheep.

Hay is stilled used as animal fodder when there is not enough pasture on which to graze an animal or when grazing is not feasible due to weather. 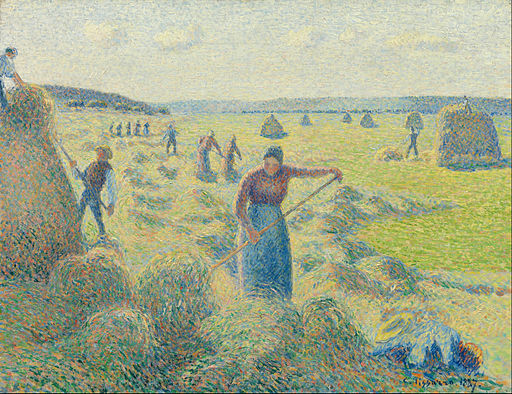 La Récolte des Foins, Éragny by Camille Pissarro, depicts the bustling haying season in rural Éragny, where Pissarro lived with his family from 1884 until he died in 1903.

Pissarro used his interpretation of pointillism to enhance the color and luminosity of his work. From a distance, Pissarro’s systematic dots and dabs, form a unity and increase the painting’s light and color intensity.

The theme of hay gathering recurs in Pissarro’s oeuvre in several media, including pencil, gouache, oil, and prints over thirty years.

Camille Corot influenced Pissarro in his subject matter of agricultural workers. He, in turn, influenced the more staccato, broken brushwork of later artists such as Georges Seurat. 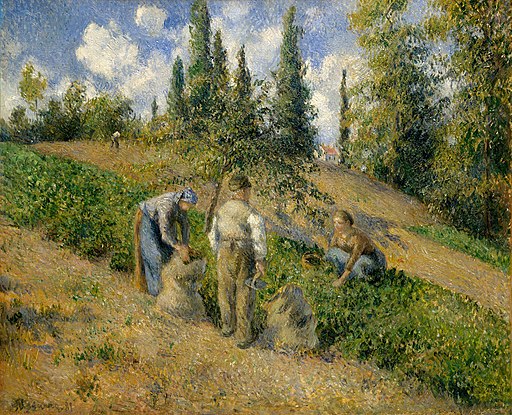 “The Harvest, Pontoise” by Camille Pissarro depicts a group of French farmers gathering potatoes. The harvest was a common theme used by Pissarro.

Pissarro’s treatment of harvesters in Pontoise is carefully structured while expressive in tone and brushwork.

Pissarro was a painter with passionate political beliefs and preferred country life rather than the city.

He saw more equality amongst living amongst the rural workers, who he greatly respected.

Pissarro saw similarities between the labors of his art and the physical work done in the fields. Many of his works reflect his interest in the pride that came from such rural labor.

“The Hay Cart, Montfoucault” by Camille Pissarro shows the transportation of the hay harvest. Methods for making hay have varied dramatically throughout history, and many regional variations still exist today.

Early farmers noticed that growing fields produced more fodder in the spring than the animals could consume and that cutting the grass in the summer, allowing it to dry and store it for the winter, provided their animals with better quality nutrition.

On some farms, the loose hay was stored in a barn, generally in such a way that it would compress down and cure. The “haycart” or wagon was used to collect and transport the hay. 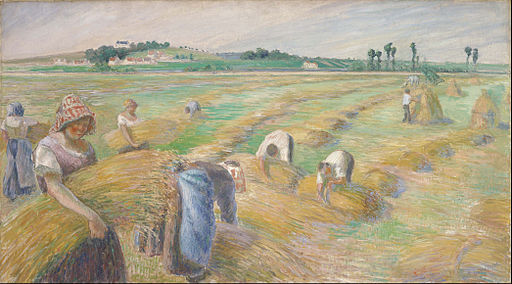 “The Harvest” by Camille Pissarro depicts the work in a wheat field that covers the entire canvas. The painting presents a scene of wheat harvesting in Pontoise, a quiet village on the outskirts of Paris.

This work was created towards the end of Pissarro’s second residence in Pontoise. During this period, he focused his attention on the workers depicting them with a psychological understanding.

The woman holding a sheaf of harvested wheat in the left foreground and a woman bent over next to her, demonstrated Pissarro’s interest on the human impact of work and the environment.

At this point, Pissarro was moving beyond the Impressionist trend of just focusing on nature and brought a new form of dynamism to his compositions.

Many preparatory works for Pissarro’s works have survived, which demonstrates how he spent many hours carefully creating this work.

His methods were more laborious than the “Impressionistic” production method of creating works in a relatively short time.

“The Shepherdess” by Camille Pissarro

Camille Pissarro works painted between 1853 and 1866