The Pont Boieldieu by Camille Pissarro

The “Pont Boieldieu in Rouen” by Camille Pissarro is a series of paintings of the Pont Boïeldieu and the quays surround by industrial traffic. Our tour includes:

“The Pont Boieldieu at Sunset” by Camille Pissarro

“The Pont Boieldieu at Sunset” by Camille Pissarro depicts the Pont Boieldieu, an iron bridge completed in 1885.  This painting shows Pissarro’s interest in moving beyond just traditional landscape paintings of verdant rural scenes.

It is one of a series of paintings created at a time when Pissarro was seeking to paint the industrial modernity of the area.

Pissarro had made an earlier trip in 1883 to Rouen and had created a series of images of the city.

However, on his 1896 visits, he stayed at different hotels, each with a balcony from which he could paint the bridge from a different angle.

His room overlooked the Seine, and it is from this vantage point that he painted.

By working from the window of his hotel room, Pissarro found an imaginative way of capturing the hustle and bustle of the city. Working from his room also avoided the challenges of installing oneself in the street.

In this painting, the sunset and the tilt of the bridge allowed Pissarro to make the most of capturing the busy pedestrian and carriage traffic.

The Pont Boieldieu at Sunset 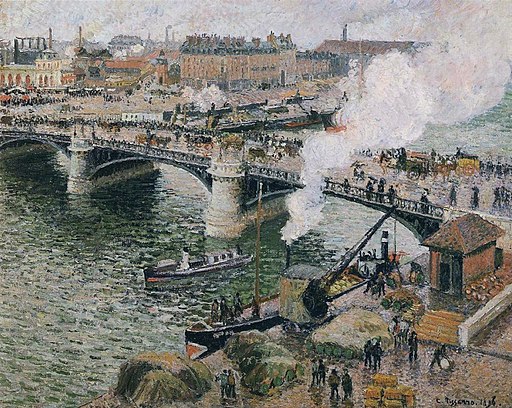 “Pont Boieldieu in Rouen, Rainy Weather” by Camille Pissarro depicts the iron bridge and across the river are the Gare d’Orléans train station and the Place Carnot square. His Rouen series focuses on the bustle of the modern city.

Pissarro deliberately sought out a view of the busy industrial section of the town and produced several paintings of the view from the hotel in different light conditions and different weather.

He was attracted to Rouen, describing it as having a unique character with its juxtaposition of old and new, which is part of what makes Pissarro’s urban paintings so interesting.

On his first 1896 trip, he stayed at the Hôtel de Paris in Rouen, and his room overlooked the Seine, and it is from this vantage point that this painting was created.

“Morning, An Overcast Day, Rouen” by Camille Pissarro depicts the Boieldieu Bridge, or Grand Pont, that Pissarro painted from a room in the Hôtel d’Angleterre.

Pissarro visited Rouen in 1896 and in a letter written that year, he describes the paintings:

“The theme is the bridge near the Place de la Bourse with the effects of rain, crowds of people coming and going, smoke from the boats, quays with cranes, workers in the foreground, and all this in grey colors glistening in the rain.”

“what particularly interests me is the motif of the iron bridge in wet weather with all the vehicles, pedestrians, workers on the embankment, boats, smoke, haze in the distance; it’s so spirited, so alive.”

Pissarro stayed at the Hôtel de Paris and the Hôtel d’Angleterre with rooms that overlooked the Seine and the bridges and a variety of views. 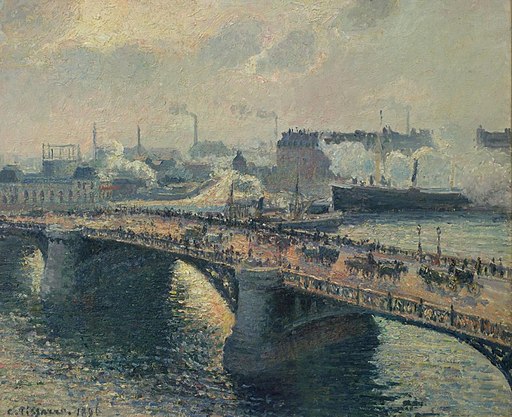 “The Pont Boieldieu in Rouen, sunset, foggy weather” by Camille Pissarro depicts the bridge in foggy weather, with its traffic of horse-drawn carts and pedestrians. In the distance, the quays are busy with boats layered with smoke and mist.

The bridge joined the old Gothic city in the north with the southern industrial areas of Sainte-Sever. On the far bank, the boats are docking and unloading cargo, with the urban landscape in the background.

Pissarro’s pointillist experiences in the years 1885-1890 and the technique of juxtaposed tones allowed him to exploit all the resources of his palette.

Pissarro captures the transitive effects of the mist and smoke, with a sense of movement in the city’s activity.

Camille Pissarro: A collection of 978 paintings