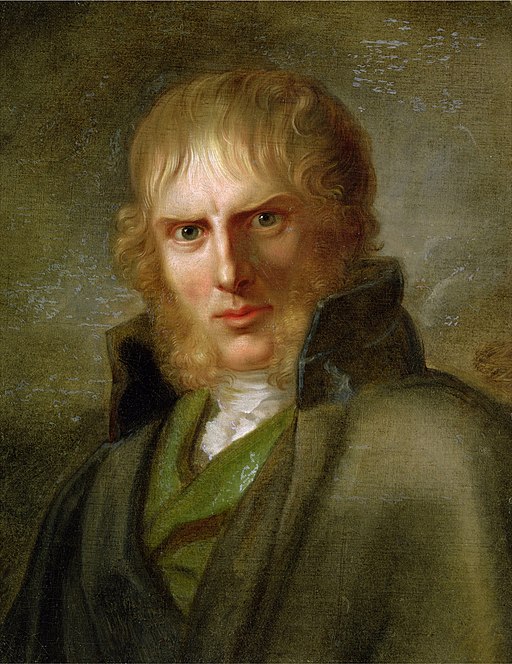 He is best known for his allegorical landscapes. His landscapes featured contemplative figures silhouetted against night skies, morning mists, barren trees or Gothic or megalithic ruins.

The rise of Nazism in the early 1930s saw a resurgence in Friedrich’s popularity, but this was followed by a sharp decline as his paintings were, by association with the Nazi movement, interpreted as having a nationalistic aspect.

Fortunately, in the late 1970s that Friedrich regained his reputation as an icon of the German Romantic movement and a painter of international importance.

Moonrise by the Sea

“Moonrise by the Sea” by Caspar David Friedrich was painted in 1822, depicting a romantic seascape scene.

Three young people, two women side by side and a man further back, are sitting on a large boulder by the sea, silhouetted against the sky as they watch the moon rising to the east above a band of clouds. In the distance are two sailing vessels, ghosting on a light breeze.

This painting is held in the Alte Nationalgalerie in Berlin, a similarly named painting by Friedrich is at the Hermitage Museum in St Petersburg with is much larger and painted in 1821.

The man on the right is wearing a green cape and beret and has a walking stick in his right hand.

The man on the left is standing on the slightly higher ground and is leaning on his companion’s shoulder; he is slimmer, looks younger, and is wearing a green coat and cap with its strap tied under his chin.

The works emphasize spirituality in nature and the presence of the sublime, which are dominant themes of Friedrich. Museum: Metropolitan Museum of Art – MET

Wanderer above the Sea of Fog

“Wanderer above the Sea of Fog” by Caspar David Friedrich depicts a man standing upon a very steep rock face with his back to the viewer.

He is wrapped in a dark green overcoat, and he holds a walking stick in his right hand for balance. His hair is caught in the wind, as he gazes out on a landscape covered in a thick sea of fog.

In the middle of the composition, several other ridges similar to the one the wanderer himself stands upon, jut out from the mist. In the far distance, mountains rise in the left, that level off into lowland plains in the east.

The pervading fog stretches out indefinitely, becoming indistinguishable from the cloud-filled sky.

The painting is composed of various elements from nature that include the Elbe Sandstone Mountains in Saxony and Bohemia, sketched in the field but rearranged by Friedrich in the studio for the painting.

In the background to the right is the Zirkelstein. The group of rocks in front of it represents the Gamrig near Rathen. The stones on which the traveler stands are a group on the Kaiserkrone. Museum:  Kunsthalle Hamburg

“The painter should paint not only what he has in front of him, but also what he sees inside himself. If he sees nothing within, then he should stop painting what is in front of him.”

“The pure, frank sentiments we hold in our hearts are the only truthful sources of art.”

“The feelings of another person should never be imposed upon us as a law.”

“All authentic art is conceived at a sacred moment and nourished in a blessed hour; an inner impulse creates it, often without the artist being aware of it.”

“I must stay alone and know that I am alone to contemplate and feel nature in full; I have to surrender myself to what encircles me, I have to merge with my clouds and rocks to be what I am.”

“If he sees nothing within, then he should stop painting what is in front of him.”

“Close your bodily eye, that you may see your picture first with the eye of the spirit. Then bring to light what you have seen in the darkness, that its effect may work back, from without to within.”

“The divine is everywhere, even in a grain of sand.”

“Every true work of art must express a distinct feeling.”

“A painting which does not take its inspiration from the heart is nothing more than futile juggling.”

“I must stay alone and know that I am alone to contemplate and feel nature in full; I have to surrender myself to what encircles me, I have to merge with my clouds and rocks to be what I am. Solitude is indispensable for my dialogue with nature.”

“You call me a misanthrope because I avoid society. You err; I love society. Yet in order not to hate people, I must avoid their company.”

“The eye and fantasy feel more attracted by nebulous distance than by that which is close and distinct in front of us.”

“Why it has often occurred to me to ask myself, do I so frequently choose death, transience, and the grave as subjects for my paintings? One must submit oneself many times to death in order someday to attain life everlasting.”

“When a scene is shrouded in mist, it seems greater, nobler and heightens the viewers’ imaginative powers, increasing expectation, like a veiled girl. Generally, the eye and the imagination are more readily drawn by nebulous distance than by what is perfectly plain for all to see.”

“Every true work of art must express a distinct feeling.”
– Caspar David Friedrich