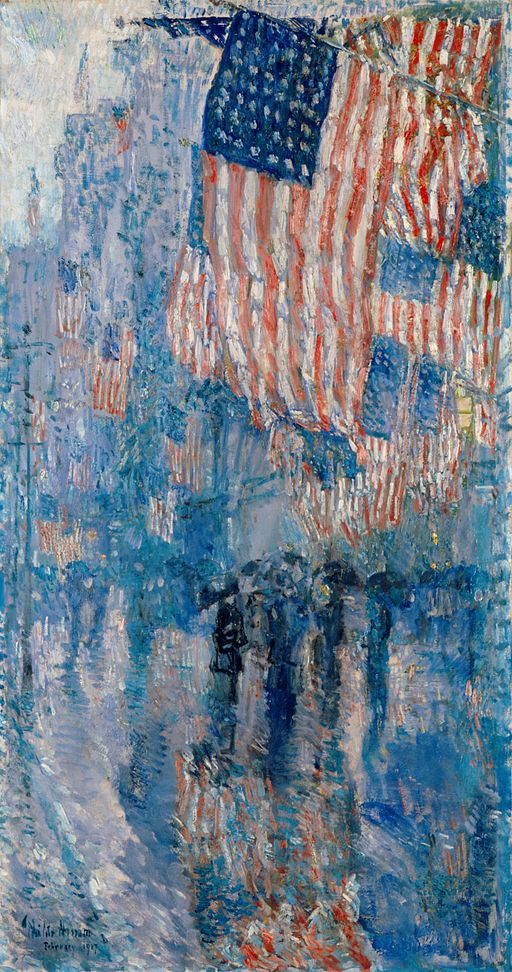 “The Avenue in the Rain” by Childe Hassam

“The Avenue in the Rain” by Childe Hassam depicts Fifth Avenue in New York City draped with US flags in the rain. Hassam completed around 30 paintings of streets decorated with flags between 1916 and 1919.

The painting is dominated by red and blue and whites colors of the American flag’s stars and stripes. Several dark figures beneath are holding umbrellas against the rain.

The flags in the background seem to be floating while the foreground flags fly from poles that project out from the buildings, which are not depicted in any detail.

The flags and dark figures are reflected on the wet rainy street and sidewalk. Hassam was influenced by two similar works of Claude Monet depicting French national celebrations with French Flags in Paris.

This painting was created in 1917, shortly before the US joined the First World War. It was a time of high patriotic fervor in the US, as Germany had extended its unrestricted submarine warfare to neutral ships, including vessels bearing the US flag.

The Zimmermann Telegram had become public knowledge in early 1917. It was a secret diplomatic communication issued from the German Foreign Office that proposed a military alliance between Germany and Mexico.

Germany offered Mexico the recovery of Texas, Arizona, and New Mexico, if the United States entered World War I against Germany. The revelation of the contents enraged Americans.

The telegram was proven genuine, helping to generate support for the United States’ declaration of war on Germany in April 1917.

The telegram was intercepted and decoded by British intelligence. The decryption was the most significant intelligence triumph for Britain during World War I and was an example of how signal intelligence can influenced world events.

The painting was donated to the White House in 1963 and hung in John F. Kennedy’s blue-themed President’s Bedroom. It has later hung in the Oval Office during Bill Clinton and Barack Obama’s terms.

The painting is one of Hassam’s works in the White House’s permanent art collection in Washington DC.

Childe Hassam (1859 – 1935) was an American Impressionist painter, noted for his urban and coastal scenes. Along with Mary Cassatt, Hassam was instrumental in promulgating Impressionism to American collectors, dealers, and museums.

He produced over 3,000 paintings, oils, watercolors, etchings, and lithographs over the course of his career, and was an influential American artist of the early 20th century.

The Avenue in the Rain

The Avenue In The Rain by Childe Hassam

“Art, to me, is the interpretation of the impression which nature makes upon the eye and brain.”
– Childe Hassam