“The Doge’s Palace” by Claude Monet

“The Doge’s Palace” by Claude Monet depicts the Venician leader’s palace,  bathed in warm light, and painted from the vantage point of a boat moored in the lagoon. The Impressionist work is painted with dappled brushstrokes in a bright palette of pinks, yellows, and blues.

The composition is divided into two horizontal zones. The upper part depicts the pink and white Venetian Gothic palace and the blue sky above. The lower part is filled with the Venetian lagoon’s rippling waters and the reflection of the buildings.

The palace facade is composed of diamond-patterned stonework of the walls, which are pierced by arched windows. The colonnaded arcades on the lower two floors create the darker shadowing.

The Lion of Venice column in the Piazzetta di San Marco is shown to the left, and Ponte della Paglia and the New Prison building to the right.

Monet painted the Doge’s Palace from several viewpoints during his three-month stay in Venice, from October to December 1908.

The title “Le Palais Ducal” refers to three similar paintings exemplified by this painting in the Brooklyn Museum.

Le Palais Ducal or The Doge’s Palace is the name given to various other compositions with different views that depict the Doge’s Palace made by Claude Monet during a visit to Venice in 1908.

These paintings are called in Italian, “Palazzo Ducale,” and French as “Palais Ducal.” 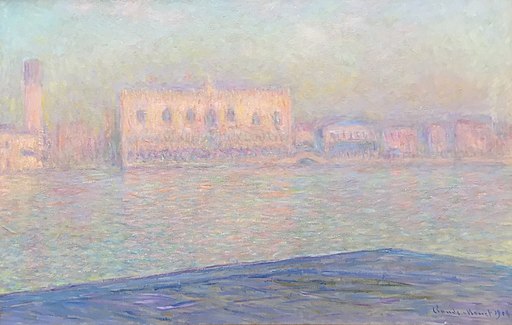 A third view shows a more oblique view from further east, the best example is in a private collection.

Monet intended to return to paint in Venice again, but his second wife’s illness prevented him from traveling back to Venice.

He continued to work on many of his Venetian paintings when he returned home to Giverny until they were shown in an exhibition in 1912.

The Doge’s Palace is built in Venetian Gothic style and is one of Venice’s main landmarks. The palace was the residence of the Doge of Venice, the supreme authority of the former Republic.

It was built in 1340 and extended and modified in the following centuries. The oldest part of the palace is the wing overlooking the lagoon, the corners of which are decorated with 14th-century sculptures.

The ground floor arcade and the loggia above are decorated with 14th- and 15th-century capitals, some of which were replaced with copies during the 19th century.

It became a museum in 1923, and today, the public entrance to the Doge’s Palace is via the Porta del Frumento, on the waterfront side of the building. 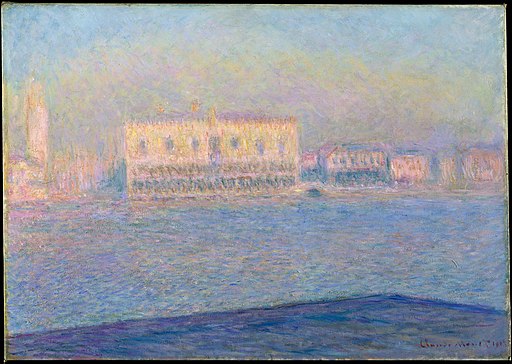 Monet adopted a painting method in which he painted the same scene many times to capture the changing of light and the passing of the seasons.

From 1883 Monet lived in Giverny, where he developed a garden landscape that included the lily ponds that would become the subjects of his best-known works at his home.

Venice Through the Eyes of Claude Monet

“The Doges Palace” by Claude Monet

Virtual Tour of the Brooklyn Museum