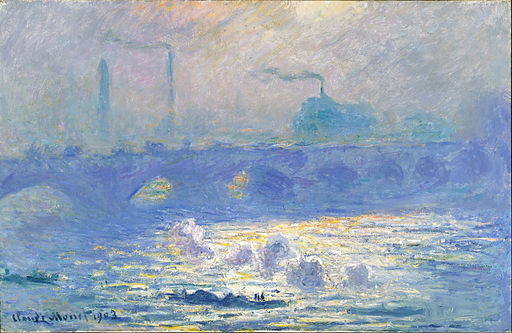 Claude Monet’s masterpieces from his Waterloo Bridge series include:

Waterloo Bridge by Claude Monet is one in a series of paintings of the famous bridge in London. All of the pictures in the “Waterloo Bridge” series share the same viewpoint overlooking the Thames.

The paintings depict different times of the day and very different weather and light conditions.

From 1899 through 1901, Monet set up his paints in the Savoy hotel and on the river’s north bank and painted the bridge over 40 times.

He depicted the “Waterloo Bridge” more than either the “Houses of Parliament” or the “Charing Cross Bridge,” from his two other London series.

Waterloo Bridge, Gray Day by Claude Monet, was painted when  Monet had ceased his earlier practice of entirely completing a painting on the spot in front of the subject.

Monet continued refining the images back at his home base in France and sometimes used photographs to help in his task. Some purists criticized this new approach.

Monet replied in strong terms that the means of creating his work was his own business, and it was up to the viewer to judge the final result.

In winter, the clouds of coal smoke mixed with the mist from the river and created a smog-like veil over the city. The haze created changed colors with the light, which Monet found fascinating to paint.

Waterloo Bridge: the Sun in the Fog by Claude Monet – National Gallery of Canada

Waterloo Bridge: the Sun in the Fog by Claude Monet – National Gallery of Canada

Waterloo Bridge: the Sun in the Fog by Claude Monet was one of the nearly a hundred views he produced of the Thames River in London.

He painted the “Waterloo Bridge Series” and “Charing Cross Bridge” from his room in the Savoy Hotel and the Houses of Parliament from Saint Thomas’s Hospital.

“I cannot send you a single canvas of London …
It is indispensable to have them all before me and tell the truth; not one is definitely finished.
I develop them all together.”

Monet continued to work on all of his London paintings back in his studio in Giverny. He refused to send any of them to his dealer until he was satisfied with them as an ensemble.

While other painters would depict London as a drab and gray, Monet focused on how the fog changed colors depending on the light.

“The fog in London assumes all sorts of colors; there are black, brown, yellow, green, purple fogs,
and the interest in painting is to get the objects as seen through these fogs.” – Monet

X-radiography has revealed that this painting initially included towers and belching smokestacks on the far bank.

Monet dissolved the original industrial landscape, focusing instead on light and the “ghostly magnificence of London.”

Not all of urban life has been erased; traffic continues on the bridge and in the water as the fog-cloaked glow of the sun pervades the scene.

Waterloo Bridge: the Sun in the Fog by Claude Monet 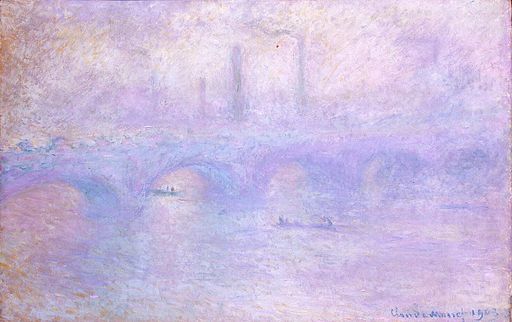 Waterloo Bridge. Effect of Fog by Claude Monet depicts the bridge crosses the River Thames in London. Its name commemorates the victory of the British at the Battle of Waterloo in 1815.

Positioned at a strategic bend in the river, it provides the best ground-level views of Westminster and the London Eye to the west, and the City of London and Canary Wharf to the east.

From his room in the Savoy Hotel, Monet had a view over the Thames towards Waterloo Bridge.

Monet’s first layers of paint were very thin; the thicker areas were developing as he continued to add layers and rework the surface. Monet captured a moment’s passing impression, which gave Impressionism its name.

Like many Impressionists, Monet was drawn to scenes of everyday life, and on the river, he depicted different types of shipping vessels.

Across the bridge are visible the factory smokestacks filling the air with smog. The smoke from the steam train and chimnies would appear surreal to the modern viewer. 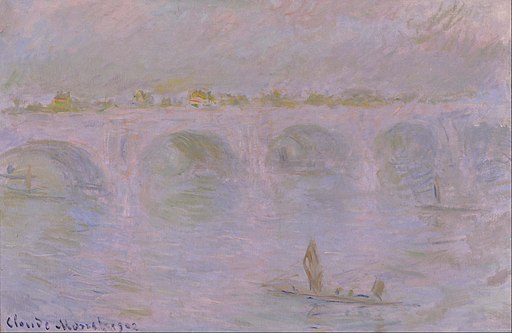 Waterloo Bridge in London by Claude Monet is a composition in which he deliberately chose to avoid modern London’s chaotic rituals. The focus is not on the mass of people and traffic rushing around self-focused.

Monet preferred a veiled, twilight London, immersed in a deep and silent fog.

Repeated shapes of boats and the round arches of the Waterloo Bridge are evidence that Monet was selective in what he included to create the atmosphere he was seeking.

Monet felt that black had a dulling effect, so instead, he used a color’s complement to darken an area.

The scene appears still, but the boats, traffic on the bridge, the river are in motion. He wanted to depict a view’s feeling or sensation, rather than the objects within the composition.

Waterloo Bridge by Claude Monet depicts the former bridge, not today’s Waterloo Bridge. In the 1930s London County Council decided to demolish the bridge in this painting and replace it with a new structure.

This painting shows the first bridge on the site, which opened in 1817. The granite bridge had nine arches, separated by double Doric stone columns. The new bridge opened in 1945 and remains in use today.

When Waterloo Bridge first opened in 1817, it acted as a bridge between the Thames River’s elegant north side, where the Savoy Hotel was located, and the south side, which was the home of industrial factories during that era.

Monet’s first series exhibited as such was of Haystacks, painted from different points of view and at different times of the day. Fifteen of the paintings were exhibited in 1891.

In the next year, he produced what is probably his best-known series, twenty-six views of Rouen Cathedral. In these paintings, Monet broke with tradition by cropping the subject.

Only a portion of the façade is seen on the canvas. The pictures do not focus on the famous building but on the play of light and shade across its surface as it transformed the Cathedral façade.

Monet had a passion for creating images of the passing of time, as seen in the movement of light over the same forms. Monet’s many series include the following subjects:

Monet is known for producing a series of paintings, in which all the versions consist of the same subject and perspective.

Restoring Monet’s Waterloo Bridge at the National Gallery of Canada

“True teachers use themselves as bridges over which they invite their students to cross; then, having facilitated their crossing, joyfully collapse, encouraging them to create bridges of their own.”
– Nikos Kazantzakis