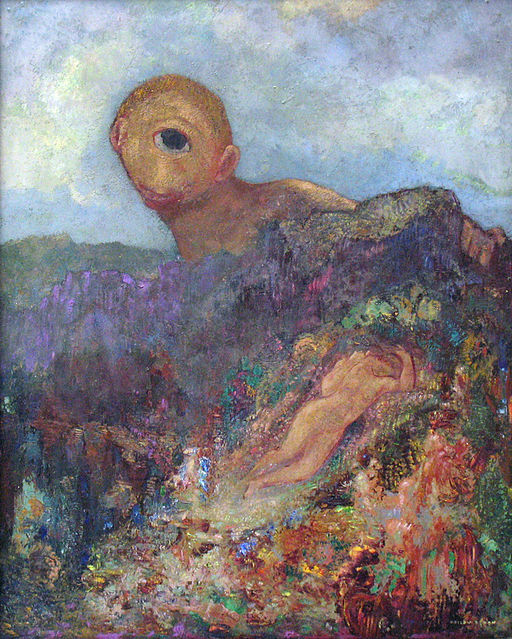 The Cyclops Polyphemus in Art

Polyphemus is the one-eyed giant from Greek mythology. He is one of the Cyclopes described in Homer’s Odyssey. His name means “abounding in songs and legends,” and he has been widely depicted in the arts.

A Short Tour of The Cyclops Polyphemus in Art

The Cyclops” by Odilon Redon

“The Cyclops” by Odilon Redon depicts the love of the Cyclops Polyphemus for the naiad Galatea who is shown lying naked amongst colorful wildflowers. Polyphemus is hiding behind the rocky terrain, too shy to confront his love interest directly. The Cyclops seems to love his victim, gingerly guarding her while simultaneously keeping her selfishly to himself.

The unnaturally large eye is the most prominent part of the painting. The eye appears as the symbol of the Polyphemus’s soul and of his mysterious, inner world.

Odilon Redon portrays a world inhabited by fairies, monsters, spirits, and other fantasy figures. As a representative of the art movement of symbolism in the late 19th century, he depicted works of the subconscious, with extraordinary dreamy worlds.

Polyphemus first appeared as a savage man-eating giant in the book of the Odyssey. Later Classical writers presented him in their poems as romantically involved with the nymph Galatea.

Polyphemus is often portrayed as unsuccessful in this romance and unaware of his disproportionate size and failings. In the work of later authors, however, he is presented as both a successful lover and a skilled musician. From the Renaissance on, art reflected all of these interpretations of the giant.

Galatea of the Nereids

Galatea was a sea-nymph referenced in the work of both Homer and Hesiod, where she is described as the fairest and most beloved of the Nereids.

In Greek mythology, the Nereids are sea nymphs or female spirits of the sea, often accompanying Poseidon, the god of the sea. Often they were friendly and helpful to sailors such as the Argonauts in their search for the Golden Fleece.

Redon was awarded the Legion of Honor in 1903. His popularity increased when a catalog of etchings and lithographs was published in 1913.

“Odysseus and Polyphemus” by Arnold Böcklin depicts an episode from the ancient Greek epic poem the Odyssey. This scene shows Odysseus escaping with his men from the island home of the Cyclopes. The Cyclopes Polyphemus is shown casting a huge rock towards the ship, as Odysseus and his crew barely escape.

In his escape, Odysseus mocked Polyphemus, who he has blinded and boastfully revealed his real names. This act of hubris backfires on Odysseus after Polyphemus prays to his father, Poseidon, for revenge.

Odysseus and the Cyclopes

In Homer’s epic, Odysseus lands on the island of the Cyclopes during his journey home from the Trojan War. Together with some of his men, they enter a cave filled with provisions. When the one-eyed giant Polyphemus returns with his flocks and discovers the men, he blocks the entrance with a great stone and eats two of the men. The next morning, the giant kills and eats two more and leaves the cave to graze his sheep.

After the giant returns in the evening and eats two more of the men, Odysseus conjures up a plan for escape. He offers Polyphemus some strong wine, and when Polyphemus is drunk, the giant asks Odysseus his name, promising him a guest-gift if he answers. Odysseus tells him his name is “Nobody” and Polyphemus promises to eat this “Nobody” last of all.

When the giant falls into a drunken sleep, Odysseus uses a hardened wooden stake from the fire to drive it into Polyphemus’s eye. When Polyphemus shouts for help from his fellow giants, saying that “Nobody” has hurt him, they think Polyphemus is being afflicted by divine power and recommend prayer as the answer.

In the morning, the blind Cyclops lets his sheep out to graze, feeling their backs to ensure that the men are not escaping. However, Odysseus and his men have tied themselves to the undersides of the animals and to escape.

Arnold Böcklin (1827 – 1901) was a Swiss symbolist painter. Influenced by Romanticism, Böcklin’s symbolist use of imagery derived from mythology and legend often overlapped with the aesthetic of the Pre-Raphaelites.

Many of Arnold Böcklin’s paintings portray mythological subjects, often allegorically exploring death and mortality in the context of a strange, fantasy world.

“Galathea” by Gustave Moreau depicts sea-nymph in a languid pose, reclining in the foreground. She is set in a rocky landscape with lush, exotic plants inspired by marine plants.

The Cyclops Polyphemus is depicted as a crouching giant observing Galatea from a distance. The painting’s brilliance and richness of textures derive from Moreau’s unique method of applying the paint pigment.

In painting, symbolism can be seen as a revival of some mystical tendencies in the Romantic tradition and was close to the self-consciously morbid and private decadent movement.

The symbols used by symbolism were intensely personal, private, obscure, and ambiguous references. More a philosophy than an actual style of art, symbolism in painting influenced the contemporary Art Nouveau style and Les Nabis.

Gustave Moreau (1826 – 1898) was a significant figure in the French Symbolist movement, whose main emphasis was the illustration of biblical and mythological figures. Moreau’s paintings appealed to the imaginations of Symbolist writers and artists.

A Tour of the Art of Everything

Greek Mythology: Odysseus And The Cyclops

“The charity that is a trifle to us can be precious to others.”
– Homer