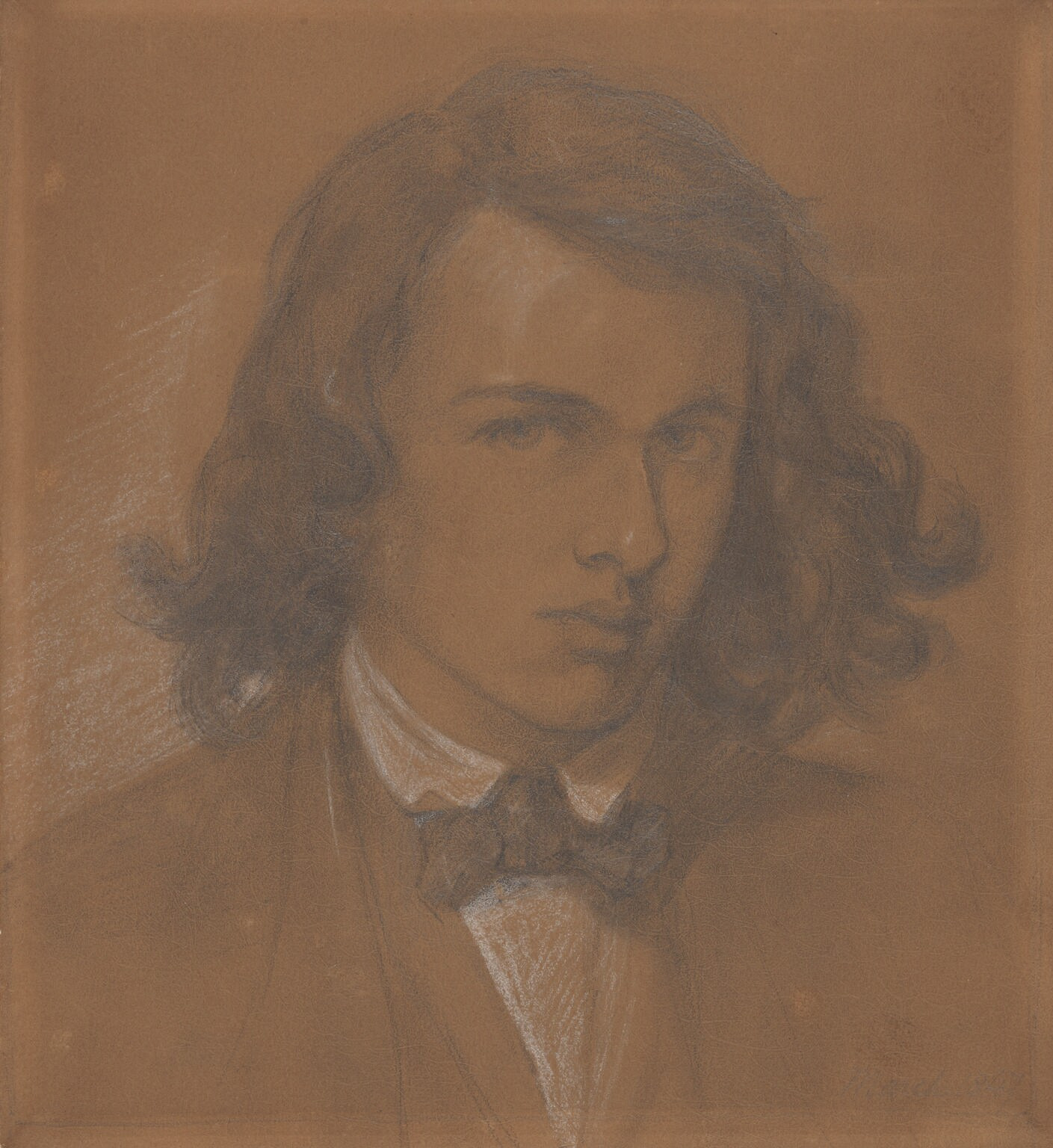 Dante Gabriel Rossetti (1828 – 1882) was a British poet, illustrator, painter, and translator. He founded the Pre-Raphaelite Brotherhood in 1848 with William Holman Hunt and John Everett Millais.

Rossetti was later to be the main inspiration for the second generation of artists and writers influenced by the movement.

Sensuality and medieval revivalism characterized Rossetti’s art. His work also influenced the European Symbolists and was a significant precursor of the Aesthetic movement.

His father was also a poet and scholar who had emigrated from Italian to England. His family was related to The House of Rossetti, with branches of the family establishing themselves across Europe and producing numerous notable people in the arts and politics.

Dante Gabriel Rossetti’s personal life was closely linked to his work, especially his relationships with his models and muses.

The name ‘Lilith’ is derived from the Babylonian Talmud and refers to a dangerous demon of the night. The name has been associated with the seduction of men and the murder of children.

The character is thought to have been derived from the stories of female demons in ancient Mesopotamian religion, found in the cuneiform texts of Sumer, the Akkadian Empire, Assyria, and Babylonia. Museum: Delaware Art Museum,

“Dante’s Dream” by Dante Gabriel Rossetti depicts Dante’s dream in which he is led to the death-bed of Beatrice Portinari.

Beatrice was the object of his unfulfilled love. Dante, in black, stands rigid and paralyzed, looking towards the dying Beatrice who is lying on a bed.

Rosetti would go on to become the founder of a new artistic and poetic movement, the Pre-Raphaelite Brotherhood. Museum: National Portrait Gallery, London

The bridal party all contrasts strikingly with the red hair and pale skin of the bride. They have varying shades of brunette hair and darker skin tones. This color contrast was carefully painted as a frame to the bride’s features. Museum:  Tate Britain

The title means “mouth that has been kissed.” Museum: Museum of Fine Arts, Boston

This painting is a small watercolor triptych executed in the medievalist style of this period in Rossetti’s art. Museum: Tate Britain

The First Anniversary of the Death of Beatrice

“I set myself again to mine occupation, to wit, to the drawing figures of angels: in doing which, I conceived of the writing of this matter in rhyme, as for her anniversary.”

The model’s name was Annie Miller, and her golden, curly locks of hair complement her golden-colored garment. She is a typical Rossettian type, with pale skin, red lips, and expressive eyes gazing into the distance.

Legends of Helen of Troy’s beauty have inspired artists throughout history to represent her, frequently as the personification of ideal human beauty. Images of Helen start appearing in the 7th century BC.

The Pre-Raphaelites was a group of English painters, poets, and art critics, founded in 1848. The group intended to reform art by rejecting what it considered the mechanistic approach first adopted by the artists who succeeded Raphael and Michelangelo, hence the name “Pre-Raphaelite.” The Pre-Raphaelite Brotherhood sought a return to the abundant detail, intense colors, and complex compositions of Pre-Raphaelite Italian art.

The Pre-Raphaelites defined themselves as a reform movement, created a distinct name for their art, and published a periodical to promote their ideas. A later, medieval influence extended the movement’s power into the twentieth century with artists such as John William Waterhouse.

“Sometimes thou seem’ st not as thyself alone,
But as the meaning of all things that are.”

“I have been here before,
But when or how I cannot tell.”

“Conception, my boy, fundamental brain work, is what makes all the difference in art.”

“Love, which is quickly kindled in the gentle heart,
seized this man for the fair form that was taken from me,
the manner still hurts me. Love which absolves no beloved one from loving,
seized me so strongly with his charm that,
as thou seest, it does not leave me yet.”

“A sonnet is a moment’s monument, Memorial from the Soul’s eternity To one dead deathless hour.”

“Love is the last relay and ultimate outposts of eternity.”

“It is beautiful, the world, and life itself. I am glad I have lived.”

“Beauty without the beloved is like a sword through the heart.”

“The worst moment for the atheist is when he is really thankful and has nobody to thank.”

“Look in my face; my name is Might-have-been;
I am also called No-more, Too-late, Farewell.”