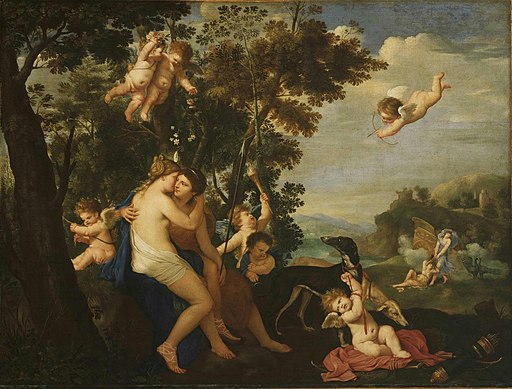 8 Famous Paintings of “Diana and Callisto”

Many famous painters have captured the ancient story of “Diana and Callisto” in Art:

“Jupiter and Callisto” attributed to Karel Philips Spierincks depicts on the left, Jupiter, disguised as Diana, goddess of the hunt, embraces the nymph Callisto.

In Greek mythology, Callisto was a beautiful young nymph, which attracted Zeus (Jupiter) attention. Zeus transformed himself into the figure of Diana to seduce and raped her in this disguise.

Callisto became pregnant, and when this was eventually discovered, she was expelled as a follower from Diana’s group, after which a furious Hera, the wife of Zeus, transformed her into a bear.

Later, just as she was about to be killed by her son when he was hunting, she was set among the stars as Ursa Major “the Great Bear.” She was the bear-mother of the Arcadians, through her son Arcas by Zeus.

In this painting, Callisto appears for the second time in the distance being dragged by the hair by Zeus’s jealous wife, Hera. Hera is identified by her characteristic chariot and peacocks.

Zeus is the sky and thunder god in ancient Greek religion, who rules as king of the gods of Mount Olympus. His name is cognate with the first element of his Roman equivalent Jupiter.

Zeus’s mythologies and powers are similar to those of Jupiter.

Hera is the goddess of women, marriage, family, and childbirth in ancient Greek and the jealous wife of Zeus. Her Roman counterpart is Juno.

Above them in the drapery are two cupids throwing love arrows filled with uncontrollable desire. The drapery is in the claws of Jupiter’s eagle.

Jupiter seduced Callisto in female disguise was  a popular subject, usually called “Jupiter and Callisto.” It was the most unambiguous common subject with lesbian lovers from classical mythology.

The two lovers are often shown happily embracing in an alcove. The violent rape described by Ovid as following Callisto’s realization of what is going on is rarely indicated.

As a follower of Artemis, Callisto took a vow to remain a virgin, as did all the nymphs of Artemis. But to have sex with her, Zeus disguised himself as Artemis herself, to lure her into his embrace.

There are various stories on how Callisto was then turned into a bear. It was either by the jealous Hera (Juno) wife of her seducer or by Diana because her follower broke her vow of chastity.

“..but afterward, when she was already with child, was seen bathing and so discovered. Upon this, the goddess was enraged and changed her into a beast. Thus she became a bear and gave birth to a son called Arcas.”

She was the bear-mother of the Arcadians, through her son Arcas by Zeus.

When Callisto, in the form of a bear, was about to be killed by her son as he was hunting, she was set among the stars as Ursa Major (“the Great Bear”).

During this time, his iconography acquired the bow and arrow that represent his source of power. Anyone who is shot by Cupid’s arrow is filled with uncontrollable desire.

In art, Cupid often appears in multiples as the Amores. In the 15th century, the iconography of Cupid started to become indistinguishable from the putto.

Under Christian influence, he often had a dual nature as Heavenly and Earthly love. In contemporary culture, Cupid is shown drawing his bow to inspire romantic love, often as an icon of Valentine’s Day.

“Diana and Callisto” by Titian

“Diana and Callisto” by Titian

“Diana and Callisto” by Titian depicts the moment Diana forces Callisto to strip and bathe and discovers her pregnancy.

Callisto was the favorite of Diana, the virgin goddess of the hunt, but Jupiter, king of the gods, noticed her beauty and disguised himself as a woman to seduce her.

Diana banished Callisto, but Callisto was then discovered by Hera, Zeus’s wife and transformed her into a bear

Titian painted Diana and Callisto for his patron, King Philip II of Spain, between 1556 and 1559.

It is one of several pictures, including “Diana and Actaeon” based on the Roman poet Ovid’s Metamorphoses, designed to be displayed together.

The stream runs from one painting to the other, and elements and poses are echoed, creating a rhythm across both canvases.

The gestures and postures of Diana and her nymphs complement those in the composition of “Diana and Actaeon.” The drama is heightened by Titian’s abilities to create dynamism and movement.

“Diana and Callisto” by Peter Paul Rubens depicts the dramatic moment when Diana and her nymphs prepare to take a bath, and Callisto’s pregnancy is revealed.

Callisto is ashamed and tries to cover herself with her clothes.

Diana is shown on the left, with the moon icon in her hair. Diana, as the goddess of the moon, the hunt, and chastity, had to punished Callisto, who had taken a vow of chastity.

The Roman poet Ovid, in his book Metamorphosis, popularised the ancient Greek myth of Diana and the nymph Callisto.

Zeus was attracted to the nymph and took the form of Diana to seduce and rape her.

Rubens has focused his composition on Callisto and the individual reaction of Diana’s followers. He has charged the image with sensuality and eroticism.

Rubens had traveled widely in the service of his international royal patrons. In his travels, Rubens studied and made copies of Titian’s paintings in Mantua, Madrid, and London.

Rubens was influenced by Titian but introduced his unique variations and style. In this version of “Diana and Callisto,” the influence of Titian, from Rubens’s visit to the royal court of Madrid in 1628-29, is evident.

“Diana and Callisto” by Sebastiano Ricci

“Diana and Callisto” by Sebastiano Ricci

“Diana and Callisto” by Sebastiano Ricci depicts the moment in which the goddess Diana discovers that her maid Callisto has become pregnant.

It is similar to Titian’s composition, which shows Diana pointing to Callisto and ordering her undressing by the other nymphs.

Callisto’s story from the Renaissance onwards focused on depicting this traumatic moment of the discovery of her pregnancy, as the goddess and her nymphs bathed in a pool.

The subject’s attraction was undoubtedly mainly the opportunity it offered for a group of several females to be shown mostly nude.

Sebastiano Ricci (1659 – 1734) was an Italian painter of the late Baroque school of Venice and became an innovator in landscape painting. 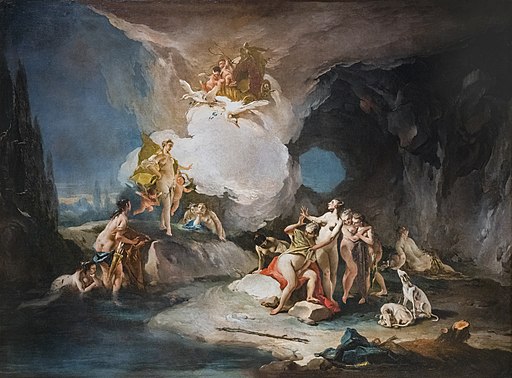 “Diana and Callisto” by Giovanni Battista Tiepolo depicts the moment Diana discovers the pregnancy of the nymph.

In Greek mythology, Callisto or Kallisto was a nymph or the daughter of King and one of the followers of Artemis, or Diana for the Romans.

Although Ovid places the discovery in the ninth month of Callisto’s pregnancy, in paintings, she is generally shown with a somewhat more modest bump for her late pregnancy.

The narrative required that the rest of the group not to have previously noticed the pregnancy.

Publius Ovidius Naso (43 BC – 18 AD), known as Ovid, was a Roman poet who lived during the reign of Augustus.

Although Ovid enjoyed enormous popularity during his lifetime, the emperor Augustus banished him to a remote province on the Black Sea, where he remained until his death. Ovid himself attributes his exile to “a poem and a mistake.”

Ovid is best known for the Metamorphoses, a 15-book continuous mythological narrative written in the meter of epic. The Metamorphoses remains one of the most important sources of classical mythology.

“Landscape with Diana and Callisto” by Cornelis van Pulenburg

“Landscape with Diana and Callisto” by Cornelis van Pulenburg

“Landscape with Diana and Callisto” by Cornelis van Pulenburg depicts Diana and her nymphs as they unclothed and prepared to bathe in the water.

But one of them, Callisto, refuses to take off her robe. Callisto, who was seduced by Jupiter, who had appeared to her disguised as Diana, is desperately trying to hide her swollen stomach.

Cornelis van Pulenburg depicts the nymphs angrily pulling her clothes off her. Diana, identified by the crescent moon on her hair, banishes the nymph for having lost her virginity.

The Metamorphoses is a Latin narrative poem by the Roman poet Ovid. The poem comprising 15 books and covers over 250 myths and chronicles the history of the world. T

he books start from the world’s creation and finish with the deification of Julius Caesar within a mythical-historical framework.

Metamorphoses is one of the most influential works in Western culture and have inspired such authors as Dante Alighieri, Giovanni Boccaccio, Geoffrey Chaucer, and William Shakespeare.

Numerous episodes from the poem have been depicted in famous works of sculpture, painting, and music.

“Diana Discovering the Pregnancy of Callisto” Attributed to Paul Brill

“Diana Discovering the Pregnancy of Callisto” Attributed to Paul Brill

“Diana Discovering the Pregnancy of Callisto” attributed to Paul Brill, depicts Diana, identified by the crescent moon, and her companions who have put down their bows and quivers to rest and bathe in the cool shade.

As the nymphs prepare to bathe, one of them, Callisto, refuses to take off her robe.

The goddess of the hunt soon discovers Callisto’s pregnancy when the other nymphs were angrily pulling her clothes off her.

With an accusatory gesture, Diana banishes the nymph as the other nymphs’ gestures explain the drama being played out.

Paul Bril (1554 – 1626) was a Flemish painter and printmaker best known for his landscapes. His landscapes had a significant influence on landscape painting in Italy and Northern Europe.

In this painting, Bril has skilfully organized the scene with alternating dark and light areas to create depth.

The constellation of Ursa Major has been seen as a bear by many distinct civilizations. This image may stem from a common oral tradition of Cosmic Hunt myths stretching back more than 13,000 years.

In Greek and Roman mythology, Zeus / Jupiter, the king of the gods, lusts after a beautiful young woman named Callisto, a nymph of Diana.

Juno, Jupiter’s jealous wife, discovers that Callisto has a son named Arcas, and believes that Jupiter is the father. Juno then transforms Callisto into a bear so she can no longer attract Jupiter.

Callisto, while in bear form, later encounters her son Arcas. Arcas almost shoots her, but to avert the tragedy, Jupiter turns his son Arcas into a bear as well and puts them both in the sky, forming Ursa Major and Ursa Minor.

Callisto is Ursa Major (“the Great Bear”), and her son, Arcas, is Ursa Minor.

The Odyssey notes that the Great Bear is the only constellation that never sinks below the horizon and “bathes in the Ocean’s waves,” so it is used as a celestial reference point for ancient navigation.

The stars of Ursa Major were all circumpolar in Athens of 400 BCE, and all but the stars in the Great Bear’s left foot were circumpolar in Ovid’s Rome in the first century CE.

Today, due to the precession of the equinoxes, the feet of the Great Bear constellation do sink below the horizon from Athens; however, Ursa Minor (Arcas) does remain entirely above the horizon.

The fourth Galilean moon of Jupiter is named after Callisto.

‘Diana and Actaeon’ and ‘Diana and Callisto’ | National Gallery

“Let others praise ancient times; I am glad I was born in these.”
– Ovid