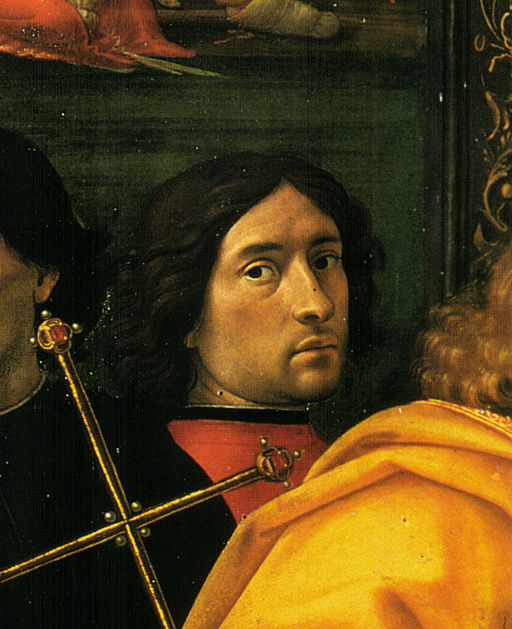 Domenico Ghirlandaio (1448 – 1494) was an Italian Renaissance painter born in Florence. He was part of the Florentine Renaissance, together with Verrocchio, the Pollaiolo brothers, and Sandro Botticelli.

She died in childbirth, giving birth to her second child in 1488, and this painting was painted after her death.

This panel is a powerful example of the late 1400’s Florentine portraiture. Giovanna has been identified as the subject of this portrait thanks to her other named portraits, where she has the same hairstyle.

Also, a medallion has survived, showing her likeness and her name. Giovanna is depicted in a traditional profile pose, which was favored due to its association with ancient coins and medallions. Museum: Thyssen-Bornemisza Museum

An Old Man and his Grandson

“An Old Man and his Grandson” by Domenico Ghirlandaio portrays an older man in a red robe, embracing a young child who is also wearing red.

They sit in a room with a window through which can be seen as a landscape consisting of a sculptured terrain and winding roads typical of many of Ghirlandaio’s background depictions.

Although the man’s fur-lined robe and the boy’s elegant doublet and cap indicate an autocratic or wealthy family, their identities are a mystery.

The identity of the sitters is no longer known. The poignancy of the image is dramatized by the contrast between the man’s weathered and wise face, and the child’s delicate profile.

It is one of Ghirlandaio’s best-known works and is considered notable for its emotional poignancy and realism. Museum: Musée du Louvre

In 1488, at age 13, Michelangelo was apprenticed to Ghirlandaio.

In 1488, at age 13, Michelangelo was apprenticed to Ghirlandaio. The next year, Ghirlandaio pay Michelangelo as an artist, which was rare for someone of fourteen years old.

Michelangelo also worked in the Vatican and painted the ceiling of the Sistine Chapel. The student surpassed the Master.

Domenico Ghirlandaio: A Collection of 117 Paintings