“The Execution of Emperor Maximilian” by Édouard Manet

Maximilian was born in 1832, the son of Archduke Franz Karl of Austria and Princess Sophie of Bavaria. He was encouraged by Napoleon III to become Emperor of Mexico following the French intervention in Mexico.

Maximilian arrived in Mexico in 1864. He faced significant opposition from forces loyal to the deposed president Benito Juárez throughout his reign, and the short-lived Second Mexican Empire collapsed after Napoleon withdrew French troops in 1866.

Maximilian was captured in 1867, sentenced to death at a court-martial, and executed, together with Generals Miguel Miramón and Tomás Mejía, on 19 June 1867.

Manet supported the Republican cause but was inspired to start work on a painting, heavily influenced by Goya’s The Third of May 1808.

In this final version of the painting, the Mexican soldiers are dressed in 19th-century field dress, common to many armies at that time. Manet recognized the irony that they could be mistaken for French soldiers.

The sergeant wearing a red cap resembles Napoleon III. In reality, the execution was bungled, and a coup de grâce was required.

The final work painted in 1868–1869, is now held by the Kunsthalle Mannheim. The painting is signed by Manet in the lower-left corner but bears the date of Maximilian’s execution in 1867, despite being painted two years later.

Political sensitivities made it impossible for Manet to exhibit his paintings in France during the reign of Napoleon III (1808 – 1873).

The Execution of Emperor Maximilian of Mexico, June 19, 1867

Maximilian and two of his generals were executed by firing squad in 1867. Manet was outraged by the death of Maximilian, who was viewed as a victim of Napoleon III’s political ambition and incompetence.

Manet decided the execution merited artistic treatment on an epic scale. This damaged painting is the second of four versions he painted between 1867 and 1868.

Manet abandoned this version of the painting because of discrepancies in the size of the figures. A photograph taken in 1883 shows the left-hand section of the canvas had been removed and the picture damaged elsewhere.

Parts of that work were cut off by Manet, but it was mostly complete on his death. After Manet’s death, his family cut up the canvas and sold individual fragments separately.

Surviving fragments were acquired by Degas and bought by the National Gallery in 1918. They were finally combined on one canvas in the late 1970s.

The Execution of Emperor Maximilian of Mexico, June 19, 1867 (London)

The Execution of Emperor Maximilian (Boston) 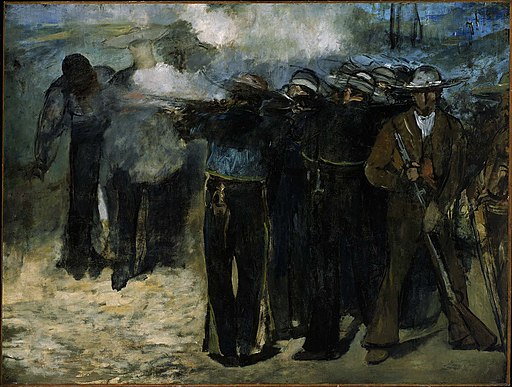 A third, unfinished, oil painting is held by the Museum of Fine Arts, Boston

Maximilian, Emperor of Mexico, was executed by order of the opposing leader, Benito Juárez. The press in France reacted with horror at the events in Mexico, and anger grew against Napoleon III in France.

Napoleon III had installed the Austrian Maximilian on the Mexican throne, but later withdrew French support for his regime.

Manet represented the contemporary event on the grand scale, usually reserved for scenes from ancient history or myth.

In this Boston version of the painting, the soldiers wear clothes and sombrero of Mexican Republicans.

The Museum of Fine Arts, Boston, holds this unfinished oil painting the first of several versions.

Maximilian I of Mexico

After a career in the Austrian Navy, he accepted an offer by Napoleon III of France to rule Mexico.

France, together with Spain and the United Kingdom, invaded the Mexican Republic in 1861, allegedly to collect debts.

The Spanish and British both withdrew the following year after negotiating agreements with Mexico’s republican government.

With the support of the French army and a group of Conservative monarchists hostile to the Liberal Party of the new Mexican president, Benito Juárez, Maximilian was offered the position of Emperor of Mexico.

The Empire managed to gain the recognition of several European powers, including Britain, Austria, and Prussia. The United States, however, continued to recognize Juárez as the legal president of Mexico.

With the end of the American Civil War in 1865, the United States began providing more explicit aid to Juárez’s forces.

After the French armies withdrew from Mexico in 1866, the Empire collapsed, and Maximilian was captured and executed by the Mexican government, which then restored the Mexican Republic.

The Execution of Emperor Maximilian of Mexico, June 19, 1867 (Boston)

The Execution of Emperor Maximilian (Copenhagen)

A much smaller study is held by the Ny Carlsberg Glyptotek in Copenhagen.

A much smaller version of “The Execution of Emperor Maximilian” in oils, the study for the Mannheim painting is held by the Ny Carlsberg Glyptotek in Copenhagen.

The sergeant wearing a red cap resembles Napoleon III. In reality, the execution was bungled, and a coup de grâce was required.

The Execution of Emperor Maximilian

Napoleon III urged Maximilian to abandon Mexico after he withdrew French troops, but Maximilian refused to desert his followers.

Faithful generals such as Miguel Miramón, Leonardo Márquez, and Tomás Mejía vowed to raise an army that would challenge the invading Republicans.

Maximilian fought on with his army of 8,000 Mexican loyalists. During the final days, he withdrew his forces to Santiago de Querétaro, where he sustained a siege for several weeks.

The city fell on 15 May 1867 and Maximilian was captured the next morning. Following a court-martial, he was sentenced to death.

Many of the crowned heads of Europe and other prominent figures, including Victor Hugo and Giuseppe Garibaldi, sent telegrams and letters to Mexico, pleading desperately for the Emperor’s life to be spared.

Juárez refused to commute the sentence because he believed it was necessary to send a message that Mexico would not tolerate any government imposed by foreign powers.

An escape plan was developed to allow Maximilian to escape execution. However, Maximilian would not go through with the project because he felt that shaving his beard to avoid recognition would ruin his dignity if he were to be recaptured.

The sentence was carried out, and Maximilian, along with Generals Miramón and Mejía, was executed by a firing squad.

Maximilian gave each of his executioners a gold coin not to shoot him in the head so that his mother could see his face. His last words were,

“I forgive everyone, and I ask everyone to forgive me. May my blood, which is about to be shed, be for the good of the country. Viva Mexico, Viva la Independencia!”

After his execution, Maximilian’s body was embalmed and displayed in Mexico. Early the following year, the former Emperor’s body was taken back to Austria. The coffin was taken to Vienna and placed within the Imperial Crypt.

The Emperor Maximilian Memorial Chapel was constructed on the hill where his execution took place.

The officer leading a firing squad administered a coup de grâce to the condemned with a pistol if the first hail of gunfire fails to kill the prisoner.

A coup de grâce is a mercy killing of a mortally wounded victim with or without the sufferer’s consent.

Lithograph versions of “The Execution of Emperor Maximilian”

Manet was refused permission to reproduce the lithograph in 1869, but an edition of 50 impressions was produced in 1884, after his death.

Examples of the lithograph are held by the Metropolitan Museum of Art in New York and the Clark Art Institute in Williamstown, Massachusetts.

The Execution of Emperor Maximilian of Mexico, June 19, 1867 (London)

The Execution of Emperor Maximilian (Manet)

Meditation on Manet’s ‘The Execution of Emperor Maximilian I’

Manet’s “The Execution of Maximilian”

Manet’s ‘The Execution of Maximilian’ BSL

An Austrian Emperor of Mexico Maximilian I

Photos of the Aftermath of the Execution of Emperor Maximilian

How This Austrian Briefly Became Emperor of Mexico

“I forgive everyone, and I ask everyone to forgive me. May my blood, which is about to be shed, be for the good of the country. Viva Mexico, Viva la Independencia!”
– Maximilian