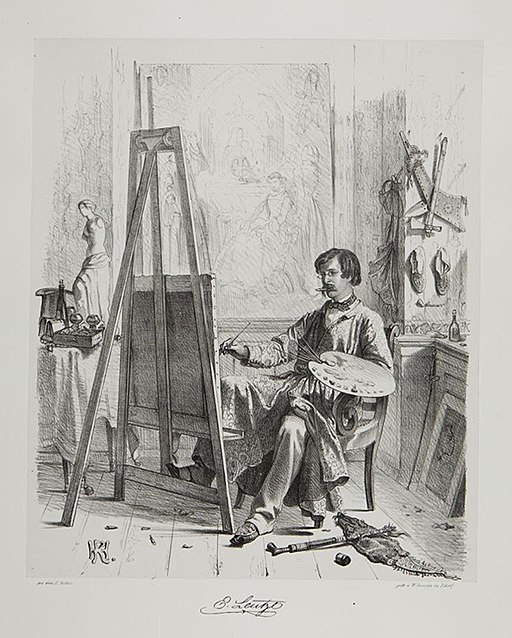 was born in Germany and was brought to the United States as a child in 1825. His parents settled first in Fredericksburg, Virginia, and then at Philadelphia.

Henceforth he became associated with the Düsseldorf school of painting of which his first work, “Columbus before the Council of Salamanca” (1841), was purchased by the Düsseldorf Art Union.

A companion picture, “Columbus in Chains,” procured him the Brussels Art Exhibition’s gold medal. It was the basis of the 1893 $2 Columbian Issue stamp.

In 1842 he went to Munich for further study and, while there, finished his “Columbus before the Queen.”  In the following year, he visited Venice and Rome, making studies from Titian and Michelangelo.

After an Italy tour, he returned to Düsseldorf in 1845, making his home there for 14 years before returning to the United States in 1859. 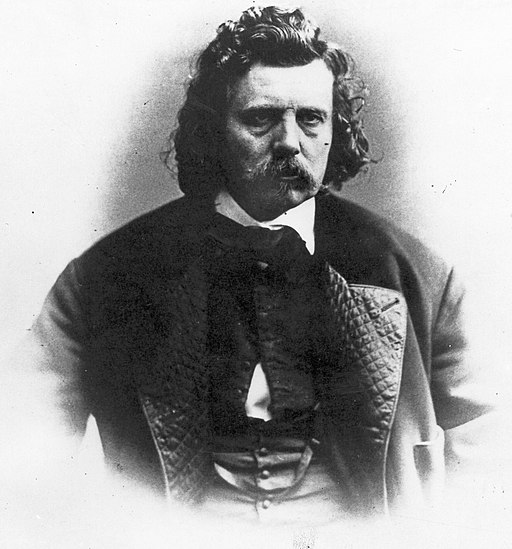 Westward the Course of Empire Takes Its Way

“Westward the Course of Empire Takes Its Way” by Emanuel Leutze is a massive painted mural currently displayed behind the House of Representatives chamber’s western staircase in the United States Capitol Building.

The picture depicts a group of pioneers on their journey westward as they catch their first glimpse of California’s “promised land.”

The painting and the mural symbolize the belief that the United States was destined for Western expansion beyond the east coast’s colonies.

The image depicts pioneers, mountain guides, wagons, and mules to suggest a divinely ordained pilgrimage to the western frontier. The picture is full of symbolism.

The pioneers stand at the Promised Land threshold, ready to fulfill what was believed to be God’s plan for the nation.

“Washington Crossing the Delaware” by Emanuel Leutze commemorates General George Washington’s crossing of the Delaware River with the Continental Army on the night of Christmas 1776, during the American Revolutionary War.

The composition shows General Washington highlighted by the white clouds in the background, as his face is lit by the upcoming sun. The distant boats and dramatic sky all provide heroic depth to the painting.

The people in the boat represent the diversity of the American colonies, including a man in a Scottish bonnet, a man of African descent, a western rifleman, two farmers in broad-brimmed hats near the back.

There is also a man at the end of the boat wearing what appears to be a Native American outfit representing the people in the United States of America.

The painting was intended to be a heroic depiction, so aesthetic concerns motivated the following deviations from historical and physical accuracy.

Columbus Before the Queen

“Columbus Before the Queen” by Emanuel Leutze depicts Christopher Columbus as a hero. He is shown commanding the center of the composition, boldly addressing the Spanish monarchs, Ferdinand and Isabella.

Columbus had formulated a plan to seek a western sea passage to the East Indies, hoping to profit from the lucrative spice trade.

Following Columbus’s persistent lobbying to multiple kingdoms, he sought an audience from Ferdinand II of Aragon and Isabella I of Castile. In 1486, permission having been granted, Columbus presented his plans to Queen Isabella, who, in turn, referred it to a committee.

Like their counterparts in Portugal, the Spanish committee reported that Columbus had grossly underestimated Asia’s distance. They pronounced the idea impractical and advised the Queen and King to pass on the venture.

Mrs. Schuyler Burning Her Wheat Fields on the Approach of the British

“The Departure of Columbus”

“These people are very unskilled in arms… with 50 men they could all be subjected and made to do all that one wished.”
– Christopher Columbus