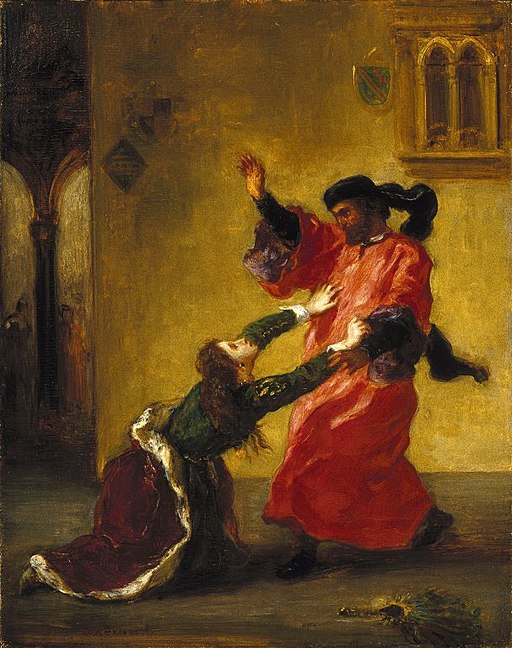 “Desdemona Cursed by her Father” by Eugène Delacroix depicts two characters from William Shakespeare’s play Othello. Shakespeare’s Desdemona is a Venetian beauty who enrages her father, a Venetian senator when she elopes with Othello, a Moorish man several years her senior.

In the play’s first act, Desdemona enrages her father by eloping with Othello, a Moor in the Venetian Republic’s service. Later, before the Duke of Venice, his councilmen, and her father, she proclaims her love for Othello and defends her choice.

Delacroix portrays Desdemona on her knees, begging for her father’s acceptance; instead, he raises his hand and curses her. The name “Disdemona” derives from Greek, which means “ill-fated, unfortunate.”

Desdemona is deeply upset by her husband’s attacks and baseless jealousy in Shakespeare’s play but continues to assert her love.

In the final act, Othello tells her she has been unfaithful and is going to kill her. Despite Desdemona’s claims of innocence, Othello refuses to believe her and strangles her in his paranoia.

Desdemona’s role has attracted many notable actresses through the centuries, including the first professional actress on the English stage, who had the distinction of being the first to perform the role in 1660.

The play of Othello continues to be performed across the world, and many cinematic versions have been produced in film.

Eugène Delacroix (1798 – 1863) was an artist regarded as the French Romantic school leader.

Delacroix’s use of expressive brushstrokes shaped the Impressionists’ work, while his passion for the exotic inspired the artists of the Symbolist movement.

Dramatic and romantic content characterized the central themes, which led him to travel in North Africa, searching for the exotic.

“Out of suffering have emerged the strongest souls; the most massive characters are seared with scars.”
– Khalil Gibran