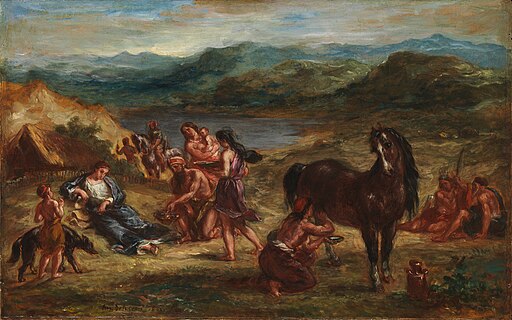 “Ovid among the Scythians” by Eugène Delacroix

“Ovid among the Scythians” by Eugène Delacroix depicts the imagined circumstances in the life of the Ancient Roman poet Ovid who was exiled by Emperor Augustus to the Black Sea port of Tomis. The town of Tomis was at that time part of Scythia, and it is where Ovid spent his last eight years writing his last poems. The Scythians were an ancient Iranian people whose way of life was described by Herodotus as “nomadic” and Ovid himself called them a “wild tribe.”

The theme of civilization confronted with barbarity imagines the life of one of Rome’s most cultured men amongst the barbarous people. In this portrayal, Delacroix shows the Scythians treating the poet with sympathy and curiosity.

The wildness and the misunderstood genius were basic ideas explored in Romanticism. This painting is one of several late paintings in which Delacroix returned to themes he had previously developed in his decorative works. “Ovid among the Scythians” is the title of two oil paintings by Delacroix. This version was painted a year before his death, in 1862, when he returned to a theme that had captured his imagination.

This 1862 version develops many elements of his earlier work. Delacroix painted it with more vivid colors, replaced the barbarian with a shield on his back with a woman bringing food. He also improved the composition by integrating the figures and the landscape.

“Ovid among the Scythians” by Eugène Delacroix (1862) 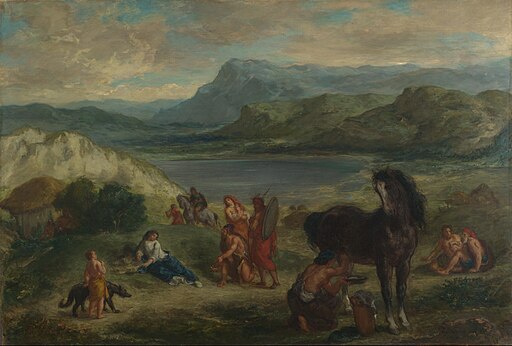 “Ovid among the Scythians” by Eugène Delacroix portrays the exile from Rome of the famous poet at the age of 50 by Emperor Augustus. The Scythian treated him well, as shown by the care with which the nomads approach the poet. The Scythians, are shown to be above the smallness of Rome, who were dedicated to the fever of conquest and power.

The civilized man confronting the natural world was a typically romantic theme. Delacroix explores the complicity that exists between the man of genius and ordinary humanity. Ovid is being offered mare’s milk, the diet of the Scythians. A boy leans on his dog, symbolizing purity and fidelity.

Delacroix first contemplated the subject of Ovid among the Scythians in about 1835, and his first treatment of it was in a pendentive for his decoration for the Palais Bourbon, Paris. Delacroix painted this subject first in 1844 as part of the decorations for the ceiling of the Library of the Palais Bourbon in Paris, in a painting there titled “Ovid Chez Les Barbares.”

Publius Ovidius Naso (43 BC – 18 AD) was a Roman poet who lived during the reign of Augustus. He was a contemporary of Virgil and Horace. Although Ovid enjoyed enormous popularity during his lifetime, the emperor Augustus banished him to a remote province on the Black Sea, where he remained until his death.

Ovid himself attributes his exile to “a poem and a mistake,” but his discretion in discussing the causes has resulted in much speculation among scholars.

Ovid is today best known for the Metamorphoses, a 15-book mythological narrative. His poetry was much imitated and greatly influenced Western art and literature. The Metamorphoses remains one of the most important sources of classical mythology.

In AD 8, Ovid was banished to Tomis, on the Black Sea, by Augustus. This event shaped all his following poetry. In exile, Ovid wrote two poetry collections that illustrated his sadness and desolation.

The obscure causes of Ovid’s exile have given rise to endless explanations from scholars. Ovid died at Tomis in AD 17 or 18.

In  2017, Ovid’s banishment was formally revoked by Rome’s city council.

Constanța, historically known as Tomis, is the oldest continuously inhabited city in Romania. It was founded around 600 BC. The city is located on the Black Sea coast and is one of the largest metropolitan areas in Romania.

One of its principal tourist attractions is Ovid’s Square, designed by the sculptor Ettore Ferrari in 1887. A statue dedicated to the Roman poet, Ovid, gives name to this square. There is an identical replica of the statue in Sulmona, Ovid’s hometown in Italy.