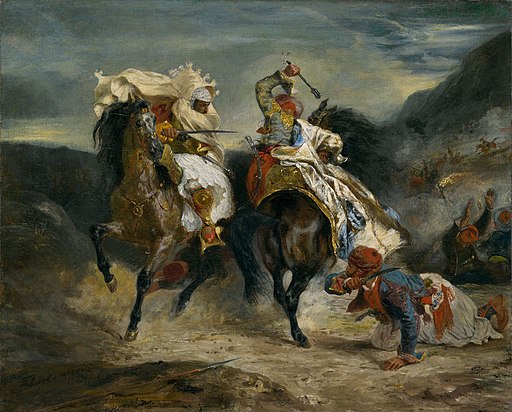 “The Combat of the Giaour and Hassan” by Eugène Delacroix

“The Combat of the Giaour and Hassan” by Eugène Delacroix depicts a scene from Lord Byron’s 1813 poem “The Giaour.” Giaour ambushed and killed Hassan, the Pasha because Giaour had fallen in love with Leila, a slave in Hassan’s harem, but Hassan had discovered this and had her killed.

In 1824, Delacroix read “The Giaour” in its French translation and was captivated by the story as he produced three works with the title “The Combat of the Giaour and Hassan.” The works are distinguished by their dates of 1826, 1835 and 1856.

This painting, his first version in 1826 shows the Giaour and Hassan, both on horseback, fighting in a gorge. A Turk who was escorting Hassan is on the ground trying to cut Giaour’s horse’s legs with his knife.

The Giaour is a poem by Lord Byron first published in 1813 as the first in the series of his Oriental romances. The Giaour proved to be a great success consolidating Byron’s reputation.

Byron was inspired to write the poem during his Grand Tour in 1810 -1811. While in Athens, he became aware of the Turkish custom of throwing a woman found guilty of adultery into the sea wrapped in a sack. The story contrasts the Christian and Muslim views of love, death, and the afterlife.

The Giaour is a long, narrative poem set in tetrameter couplets and quatrains. The word “Giaour” of the title is the Turkish word for infidel or non-Muslim man. The story takes place in 17th-century Greece, near Athens, and recounts the story of Leila, a slave to the caliph Hassan.

The Combat of the Giaour and Hassan

“The Combat of the Giaour and Hassan” by Eugène Delacroix, 1835 version, focuses entirely on the two riders. Delacroix depicts the poem’s dramatic climax when the “Giaour,” a Turkish word for a non-Muslim, avenges his lover’s death at the hands of the Turk Hassan.

With their swords drawn, the two enemies face off in mirroring poses. Giaour is depicted in traditional Greek Fustanella costume consisting of the traditional pleated skirt-like garment that is also referred to as a kilt worn by men of Greece. With intense drama, and forceful colors and forms, this painting is one of the six known paintings Delacroix made based on Byron’s poem.

“And fate, and fury, drive along.
The bickering sabers’ shivering jar;
And pealing wide or ringing near
Its echoes on the throbbing ear,
The death shot hissing from afar;
The shock, the shout, the groan of war,
Reverberate along that vale

– The Giaour by Lord Byron

In the poem, the Christian Giaour is an outcast Venetian warrior. At the time, parts of Greece were under Venetian rule, while other parts were under Turkish occupation. Giaour slays the Turk Hassan to avenge, Leila, who had fled from the Turk’s harem. On being recaptured, she was flung into the sea, her punishment for infidelity. Giaour was in love with Leila.

At the end of the tale, Giaour enters a monastery to morn for what could have been.

George Gordon Byron (1788 – 1824) was an English poet, peer, and politician who became a revolutionary in the Greek War of Independence, and is considered one of the leading figures of the Romantic movement.

Known simply as Lord Byron, he is regarded as one of the great English poets. He traveled extensively across Europe, especially in Italy, where he lived for seven years and frequently visited his friend and fellow poet, Percy Bysshe Shelley.

Later Byron joined the Greek War of Independence fighting the Ottoman Empire and he died of disease leading a campaign during that war, for which Greeks revere him as a national hero. He died at the age of 36 from a fever contracted after the First and Second Siege of Missolonghi.

His daughter, Ada Lovelace, was a foundational figure in the field of computer programming based on her notes for Charles Babbage’s Analytical Engine.

“The Combat of the Giaour and Hassan” by Eugène Delacroix (1835)

Everything You Always Wanted to Know About THE GIAOUR

Byron and the Byronic Hero

The Giaour by Lord Byron

The Giaour by Lord BYRON – Audiobook

“They never fail who die in a great cause.”
– Lord Byron