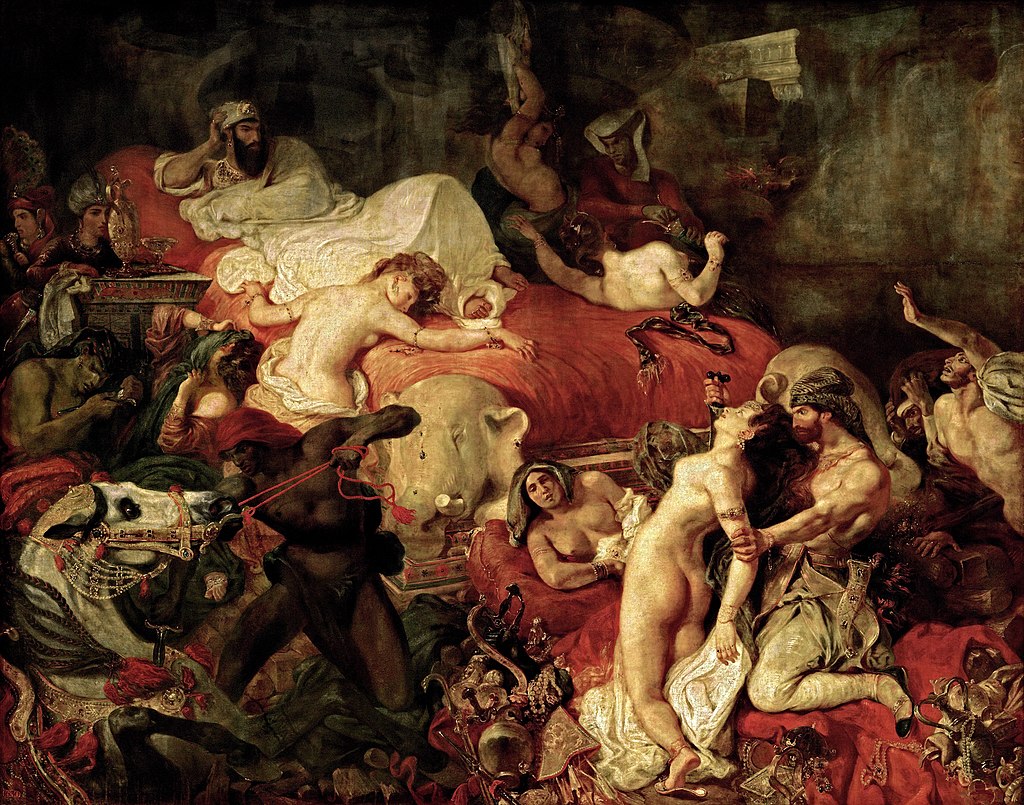 “The Death of Sardanapalus” by Eugène Delacroix

“The Death of Sardanapalus” by Eugène Delacroix depicts the tale of Sardanapalus, a king of Assyria, who, according to an ancient story, exceeded all previous rulers in sloth and decadence.

He spent his whole life in self-indulgence, and when he wrote his epitaph, he stated that physical gratification is the only purpose of life.

His debauchery caused dissatisfaction within the Assyrian empire, allowing conspiracies against him to develop. Sardanapalus failed to defeat the rebels, and then enemies of the empire join the battle against him.

After Sardanapalus’ last defenses collapsed and to avoid falling into the hands of his enemies, Sardanapalus ordered an enormous funeral pyre.

On the funeral pyre were piled all his gold and valuables. He also ordered that his eunuchs and concubines be added to the fire, to burn them and himself to death.

The King’s last act of destroying his valued possessions, including people and goods, in a funerary pyre, demonstrated his final depravity.

The story of the death of Sardanapalus is based on the tale from an ancient Greek historian, which inspired Lord Byron to write the play Sardanapalus in 1821.

Byron’s play, in turn, inspired a cantata by Hector Berlioz, called Sardanapale in 1830, and then Franz Liszt’s opera, Sardanapale, in 1845.

Delacroix’s painting was part of the era of Romanticism, and this painting added to the growing awareness of the story of Sardanapalus.

Delacroix’s original painting is dated 1827 and hangs in the Musée du Louvre, Paris, a smaller replica, painted by Delacroix in 1844, hangs in the Philadelphia Museum of Art.

The Death of Sardanapalus

“The Death of Sardanapalus” – Philadelphia Museum of Art

“The Death of Sardanapalus” by Eugène Delacroix

Delacroix’s composition is centered on a large bed draped in luxurious red fabrics golden and with elephant head sculptures at the base of the bed.

On the bed lies Sardanapalus with a look of contempt, overseeing the chaos. He is dressed in flowing white fabrics and with elaborate gold around his neck and head.

Also, each of the King’s pampered toes has a jeweled toe ring on it. One woman lies dead at his feet, and five other women are in various stages of undress, and in the process of being stabbed with knives by the King’s men.

One man is also attempting to kill the King’s favorite horse, while two young men by the King’s right elbow are attending to the King’s command with an elegant golden decanter and a cup.

The King’s room is full of treasure, and just outside can be seen the funeral pyre being fired up in preparation for the cremation of the King and all his riches, favorite women, men, and horse.

The Death of Sardanapalus

Sardanapalus is a historical tragedy by Lord Byron, set in ancient Nineveh, and tells the story of the fall of the Assyrian monarchy and its last King.

Written in 1821, it draws its story mainly from the Historical Library of Diodorus Siculus, an ancient Greek historian.

Byron wrote the play during his stay in Ravenna and dedicated it to Goethe. It has had an extensive influence on European culture, inspiring Delacroix painting and musical works by Berlioz, Liszt, and Ravel.

Byron intended his play as a closet piece, writing that it was expressly written not for the theatre. A closet drama is a play that is not intended to be performed on stage but read by a solitary reader or sometimes out loud in a small group.

The contrast between closet drama and classic “stage” dramas dates back to the late eighteenth century.

“Till now, no drop from an Assyrian vein
Hath flow’d for me, nor hath the smallest coin
Of Nineveh’s vast treasures e’er been lavish’d
On objects which could cost her sons a tear:
If then they hate me, ’tis because I hate not:
If they rebel, ’tis because I oppress not.”

His wishes were respected during his lifetime, but in 1834 a French translation was played in Brussels. Later the first tragedy was performed at the Theatre Royal, London. In 1877 an adaptation of the play was staged at Booth’s Theatre in New York.

Delacroix’s depiction of The Death of Sardanapalus became a favorite subject for composers, especially in France. In 1830 competitors for the Paris Conservatoire’s Prix de Rome were given a text that was based on Byron’s play and Delacroix’ painting, to set as a cantata.

In the mid-1840s, Franz Liszt conceived the idea of writing an opera based on Sardanapalus, though his opera was never finished, 111 pages of sketches for it still survive. Various composers completed several other Sardanapale operas based on Byron’s play.

Eugène Delacroix was an artist regarded as the leader of the French Romantic school.

Delacroix’s use of expressive brushstrokes shaped the work of the Impressionists, while his passion for the exotic inspired the artists of the Symbolist movement.

The death of Sardanapalus By Eugène Delacroix

Art Talk The Death of Sardanapalus

The death of Sardanapalus, Louvre, Paris. Eugène Delacroix and his power of provocation

Virtual Tour of Paintings in the Louvre

Virtual Tour of the Philadelphia Museum of Art

Delacroix, The Death of Sardanapalus

“The source of genius is imagination alone, . . . the refinement of the senses that sees what others do not see, or sees them differently.”
– Eugène Delacroix