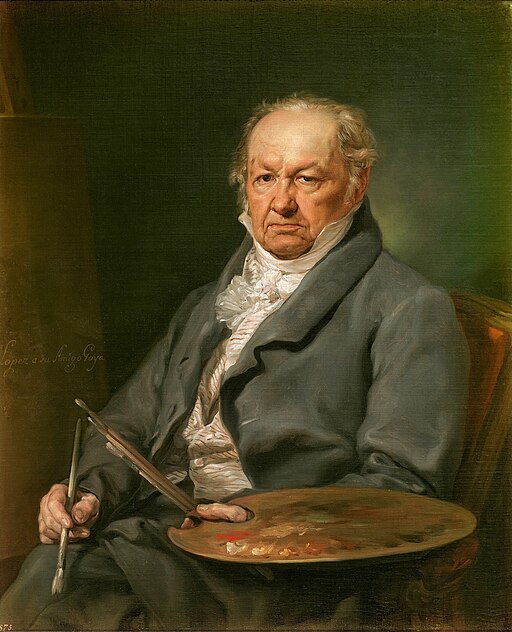 A Virtual Tour of Francisco Goya

He was born to a modest family in Aragon, Spain, and started the study of painting from the age of 14.

He married at the age of 27, and after a series of pregnancies and miscarriages, only one child, a son, survived into adulthood.

Goya became the court painter to the Spanish Crown in 1786. This early part of his career is marked by portraits of the Spanish aristocracy, royalty, and Rococo style tapestry cartoons designed for the royal palace.

Goya suffered a severe illness in 1793, which left him deaf. Sick and disillusioned, his work became progressively darker and pessimistic. His later paintings, prints, and drawings seem to reflect a bleaker outlook.

In 1807 Napoleon led the French army into war against Spain. Goya remained in Madrid during the war, which appears to have affected him deeply.

Other works from this period of his life include paintings concerned with insanity, mental asylums, witches, fantastical creatures, and religious and political corruption.

This suggests that he feared for both his country’s fate and his own psychological and physical health.

Following a stroke that left him paralyzed on his right side and suffering failing eyesight, he died and was buried in 1828, aged 82.

His body was later re-interred in Madrid. Famously, however, Goya’s skull went missing, a detail the Spanish consul in France immediately communicated to his superiors in Madrid.

The Spanish authorities wired back, “Send Goya, with or without a head.”

“The Third of May 1808” by Francisco Goya depicts the early hours of the morning after the uprising in May 1808 by the people of Madrid against the occupation of the city by French troops. Goya portrays the French as a rigidly firing squad, and the citizens are represented as a disorganized group of captives held at gunpoint.

Executioners and victims face each other in a confined space. The Spanish uprising had provoked harsh repression by the French forces. Museum: Prado Museum, Museo del Prado

“The Repentant St. Peter” by Francisco Goya shows the saint in tearful repentance with the “Keys of Heaven.” In this painting, St Peter raises his tear-filled eyes to Heaven, and his hands are joined in prayer. This image of St Peter is reminiscent of the earlier El Greco paintings, which also show the saint with white hair and beard, and his yellow cloak over a blue tunic. In the Goya’s version, the saint is shown balder and much heavier set than the El Greco elongated and austere depictions.

Goyer painted this image four years before his death, during a period of seclusion when his work became progressively darker and pessimistic. In Goya’s late period, he was disillusioned by the political and social developments in Spain, and he lived in near isolation. Goya eventually abandoned Spain in 1824 to retire to the French city of Bordeaux. Museum: The Phillips Collection

“Saturn Devouring His Son” by Francisco Goya depicts the Greek myth of the Titan. He feared that he would be overthrown by one of his children, so he ate each one of his children upon their birth. The work is one of the 14 Black Paintings that Goya painted directly onto the walls of his house sometime between 1819 and 1823. It was transferred to the canvas after Goya’s death and has since been held in the Museo del Prado in Madrid.

According to Roman myth, which was inspired by the original Greek myth, it had been foretold that one of the sons of Saturn (Cronus in the Greek original myth) would overthrow him, just as Saturn had overthrown his father. To prevent this, Saturn ate his children moments after each was born. His wife Ops eventually hid his third son, Jupiter, on the island of Crete, and deceived Saturn by offering a stone wrapped in swaddling in his place. Jupiter eventually supplanted his father Saturn, just as the prophecy had predicted. Museum: Prado Museum, Museo del Prado

“The Portrait of Doña Antonia Zárate” by the Spanish artist Francisco Goya is a portrait of the actress Antonia Zárate. It was produced in Goya’s studio, and it shows her wearing most likely an outfit from one of her performances. Antonia Zárate was the daughter of an actor and director of a performing company.

She continued in the family tradition as an actress and singer with success throughout Spain but mainly acted in the Spanish capital, where she became a friend of Francisco Goya. Museum: Hermitage Museum, Saint Petersburg

“The Portrait of Doña Antonia Zárate” by Francisco Goya shows her wearing a fashionable black silk dress in the Empire style. Fingerless white gloves cover her arms, she holds a closed fan, and a mantilla covers her head and shoulders. This portrait was painted in 1805, and a second portrait was also painted in 1810-11, the face and hair are very similar. However, the background and dress are very different.

“Portrait of Doña Isabel de Porcel” by Francisco Goya depicts Isabel Lobo Velasco de Porcel, who was born at Ronda around 1780. The half-length portrait depicts a young woman dressed in typical Spanish attire, a white shirt, and a black mantilla. The richness of the textiles and her appearance give the picture an aristocratic elegance. The decisive gesture in which the hands are on the hips and the elbows are bowed outward, and her confidence stands out.

Her eyes and hair are light browns, her skin is pale, and her body is slightly turned, while her head gives balance by being turned to the opposite side. Goya has achieved realism and deepness without adding any other objects to the composition. One of the unique aspects of this painting is that the woman is looking towards the left side of the viewer and not towards him. This is the case of many of Goya’s paintings. Museum: National Gallery, London

The crowd saw the Mamelukes as Moors, which provoked an angry response. Instead of dispersing, the crowd turned on the charging Mamelukes, resulting in a ferocious fight. Goya chose not to paint the focal point to emphasize the chaos of the drama. Museum: Prado Museum, Museo del Prado

“First, be a magnificent artist, and then you can do whatever, but the art must be first.”

“The act of painting is about one heart telling another heart where he found salvation.”

“Fantasy, abandoned by reason, produces impossible monsters; united with it, she is the mother of the arts and the origin of marvels.”

“Always lines never forms! But where do they find these lines in Nature? For my part, I see only forms that are lit up and forms that are not. There is only light and shadow.”

“I will give a proof to demonstrate with facts that there are no rules in painting and that oppression or servile obligation of making all study or follow the same path is a great impediment for the young who profess this very difficult art.”

“My brush should not see better than I do.”

“I am beginning to have more powerful enemies and more envious ones, too.”

“Painting (like poetry) chooses from universals what is most apposite. It brings together, in a single imaginary being, circumstances and characteristics which occur in nature in many different persons.”

“I have no fear of Witches, goblins, ghosts, or thugs.”

The Life and Works of Francisco de Goya

“The act of painting is about one heart telling another heart where he found salvation. “
– Francisco de Goya