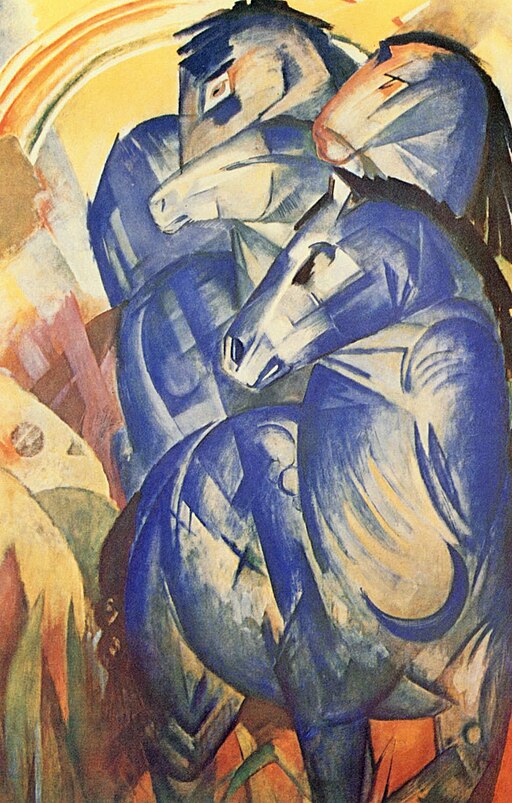 “The Tower of Blue Horses” by Franz Marc

“The Tower of Blue Horses” by Franz Marc shows a group of four frontally staggered horses in blue shades. Their heads are turned to the left with muscular, almost life-sized bodies dominating the composition. The four primarily blue horses, arranged in a tier to the right of the center of the picture.

On the left side of the picture is an abstract rock landscape in yellow, brown, and red tones, which is arched over by an orange striped rainbow on a yellow background. The rainbow and the crescent moon, as well as the crosses on the body of the horse, express the unity of cosmos and nature.

After World War I, this painting was acquired by the Berlin National Gallery. It was removed from there as part of the “cleansing” of modern artworks under the Nazis. It was included in the “Degenerate Art Exhibition” which opened in 1937 in Munich.

However, in response to a protest by veterans, because Marc had died fighting for his country in World War I, the painting was removed and was not included in the exhibition when it opened in Berlin.

It was instead transferred to Hermann Göring’s custody which then went missing at war’s end.

“The Tower of Blue Horses” is one of many animal paintings by Marc, among which several depict horses. He was attempting to imagine the view through the animal’s eyes.

The tight composition of the work with its geometric structure and the use of color with echos of stained glass, and with decreasing color saturation as the eye wanders upwards created a compelling upward view.

Marc had a nature-oriented quest for spiritual redemption as his inspiration for his art. He felt that animals possessed a certain godliness that men had lost. Also, as a symbolist painter, he used mythological and dream imagery.

The symbols he used had personal, private, and ambiguous references. For Marc, blue equated to spirituality and maleness, yellow with femininity and red with the earth.

The colors in the painting are symbolically representing the sense of the objects in the artwork.

Franz Marc worked with Kandinsky in the formation of the Blue Rider (Der Blaue Reiter) group of like-minded artists.

The group released the “The Blue Rider Almanac” and held two exhibits. More of each were planned, but the outbreak of World War I in 1914 ended these plans.

Kandinsky returned to Russia via Switzerland and Sweden. Marc was drafted into the German Army, where he designed military camouflage.

He painted tarpaulin covers in styles varying “from Manet to Kandinsky,” to conceal troops and equipment from enemy aircraft.

“The Degenerate Art Exhibition” was an art exhibition organized by the Nazi Party in Munich in 1937. The exhibition presented 650 works of art, confiscated from German museums, and was staged in counterpoint to the concurrent “Great German Art Exhibition.”

Degenerate art was defined as works that “insult German feeling, or destroy or confuse natural form or simply reveal an absence of adequate manual and artistic skill.” Over two million people attended the exhibition.

The Exhibition included 650 paintings, sculptures, and prints by 112 artists, primarily German, such as Paul Klee, Georg Kolbe, Franz Marc, and others.

Marc showed several of his works in the first Der Blaue Reiter exhibition in Munich between 1911 and 1912.

The Tower of Blue Horses

“The Fate of the Animals” & “The Tower of Blue Horses”

The Tower of Blue Horses