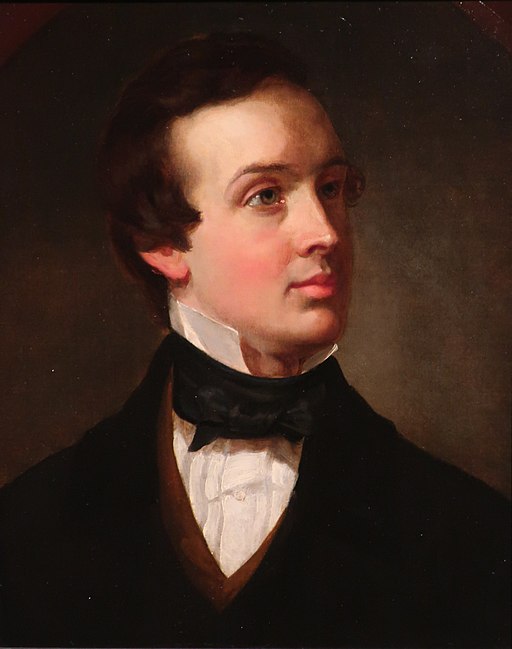 “The Aegean Sea” by Frederic Edwin Church is a capriccio, which means an architectural fantasy. In this painting, the artist places together buildings, archaeological ruins, and other structural elements in fictional combinations.

This artwork was inspired by Church’s travels to Europe and the Middle East from 1867 to 1869. The composite image includes elements from sketches that Church made in different locations.

Included in the “The Aegean Sea” are the rock-cut entrance from Petra, the fallen capitals from the Temple of Bacchus at Baalbek, and Roman columns from Syria.

In the distance lie classical ruins that resemble the Acropolis of Athens or the Temple of Apollo in Ancient Corinth, and the dome and minaret of a mosque from Istanbul.

Niagara” by Frederic Edwin Church depicts Horseshoe Falls, the largest and most iconic of Niagara’s three waterfalls. This panoramic view from the Niagara Falls’ Canadian side is dramatic and unique and immerses the viewer into the scene.

The canvas’s unusual proportions with a width of 2.3 meters (7 ft 7 in), makes it more than twice as wide as it is high and delivers a composition that leads the eye laterally.

“Niagara” is highly naturalistic and brings the viewer to the falls’ lip, highlighting the cascading waters by painting in streams of water and cloudy mists.

The only foreground object is a floating tree trunk with tree roots that provide a sense of scale. The white foam near the trunk has a thicket paint dimension on an otherwise smooth canvas.

The painting’s mountain peak was named after Church during an important American Arctic expedition represented by the dwarfed ship. The ship’s details were drawn from a sketch Hayes had brought back upon returning from the expedition.

Among the vastness of nature, the tiny ship named “United States” highlighted America’s achievements and American optimism to navigate its future global role.

The ship’s safe passage through the dark and harsh Arctic environment and American destiny is symbolized by a minute light shining out from one of the ship’s windows.

Church used small touches of pigment built together through thin applications to ensure that the viewer does not notice the different paint strokes. This work used tones of ochre, brown, gray going to blue or green, and green.

“The Icebergs” by Frederic Edwin Church is an imaginative depiction of composite views and many sketches to convey an ice-based landscape painting. His 1859 voyage to the North Atlantic around Newfoundland and Labrador inspired this composition.

The Icebergs’ play of light is highly detailed. The afternoon sun casts shadows in blues, purples, and pinks, and the ice and water interact in complex reflections, especially by the grotto.

A marooned ship’s mast point to a boulder and grotto. The boulder rests on the ice shelf above the grotto and stains the ice with a rust color.

The boulder symbolizes the geological debates of the day on the theory of “continental lift.”  It serves as a reminder that the iceberg once had contact with the land.

The boulder and ice around the grotto are painted with impasto, while Church otherwise conceals his brushstrokes.

The painting is composed of several icebergs in the afternoon light of the Arctic. Church’s challenge was to produce a grand landscape painting of an environment limited in color and life. The composition is partially abstract, leaving much to the imagination.