The painting’s mountain peak was named after Church during an important American Arctic expedition represented by the dwarfed ship. The ship’s details were drawn from a sketch Hayes had brought back upon returning from the expedition.

Among the vastness of nature, the tiny ship named “United States” highlighted America’s achievements and American optimism to navigate its future global role.

The ship’s safe passage through the dark and harsh Arctic environment and American destiny is symbolized by a minute light shining out from one of the ship’s windows.

Church used small touches of pigment built together through thin applications to ensure that the viewer does not notice the different paint strokes. This work used tones of ochre, brown, gray going to blue or green, and green.

The Arctic explorer Isaac Hayes described the Aurora Borealis as:

“The light grew by degrees more and more intense, and from irregular bursts,
it settled into an almost steady sheet of brightness…
The exhibition, at first tame and quiet, became, in the end, startling in its brilliancy.
The broad dome above me is all ablaze…
The color of the light was chiefly red, but this was not constant,
and every hue mingled in the fierce display.
Blue and yellow streamers were playing in the lurid fire;
and, sometimes starting side by side from the wide expanse of the illuminated arch,
they melt into each other,
and throw a ghostly glare of green into the face and over the landscape.
Again this green overrides the red;
blue and orange clasp each other in their rapid flight;
violet darts tear through a broad flush of yellow,
and countless tongues of white flame, formed of these uniting streams,
rush aloft and lick the skies.”

During his expedition, Hayes had named a 2,540-foot peak “Church’s Peak” after his friend Church and gave his own sketch to the artist.

Church used Hayes’s sketches as a reference for the peak that appears in his “Aurora Borealis” and painted Hayes’ ship the “United States” in the foreground.

Church’s friendship with Isaac Israel Hayes stimulated the artist’s interest in the arctic regions. In 1859, Church traveled to Newfoundland and Labrador.

Painted in 1865 at the end of the American Civil War, the painting symbolized renewed optimism in natural and historical events.

The resulting ionization and excitation of atmospheric constituents emit light of varying color and complexity.

The word “aurora” is derived from the name of the Roman goddess of the dawn, Aurora, who traveled from east to west, announcing the sun’s coming.

Ancient Greek poets used the name metaphorically to refer to dawn, often mentioning its play of colors across the dark sky. 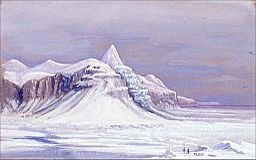 Departing in 1860 aboard the “United States,” he hoped to reach the North Pole. After arriving in Greenland, he encouraged several Eskimos to join his 20-man party as hunters to ensure that his crew would not starve.

Hayes had received rudimentary instruction in draftsmanship from Church before departing and made a watercolor sketch of “Church’s Peak” in 1861. Church used this sketch and others by Hayes for his painting.

He set out to the Open Polar Sea but, like others before him, was eventually forced by the terrain, harsh climate, and dwindling food supplies to turn back.

Believing that they had achieved their objectives, Hayes and his team returned to Greenland to learn that their nation had descended into Civil War.

Subsequent researchers concluded that he had overestimated his reach by more than 100 miles (160 km), and the farthest point he reached was Cape Collinson, less than 10 miles (16 km) north of 80° north, longitude 70°30′ west.

The Civil War and American Art