“The Icebergs” by Frederic Edwin Church is an imaginative depiction of composite views and many sketches to convey an ice-based landscape painting. His 1859 voyage to the North Atlantic around Newfoundland and Labrador inspired this composition.

The Icebergs’ play of light is highly detailed. The afternoon sun casts shadows in blues, purples, and pinks, and the ice and water interact in complex reflections, especially by the grotto.

A marooned ship’s mast point to a boulder and grotto. The boulder rests on the ice shelf above the grotto and stains the ice with a rust color.

The boulder symbolizes the geological debates of the day on the theory of “continental lift.”  It serves as a reminder that the iceberg once had contact with the land.

The boulder and ice around the grotto are painted with impasto, while Church otherwise conceals his brushstrokes.

The painting is composed of several icebergs in the afternoon light of the Arctic. Church’s challenge was to produce a grand landscape painting of an environment limited in color and life. The composition is partially abstract, leaving much to the imagination.

The shapes in the icebergs can be imagined as forming profiles of human-like faces.  Vague humanoid profiles or skull-like ice blocks may be decerned in the iceberg shapes, especially in the top left corner.

The melted water in the foreground is a light blue, and small water deposits are emerald beneath. Church observed that newly frozen water within the cracks of icebergs produced a striking blue color. These blue veins of sapphire are shown at left.

“The Icebergs” was first displayed in New York City in 1861, with a 25 cent admittance to the one-painting show, and similar exhibitions were held in Boston and London followed.

The unconventional landscape of ice, water, and sky drew interest and praise, but the American Civil War, which began the same year, reduced the demand for further cultural events. 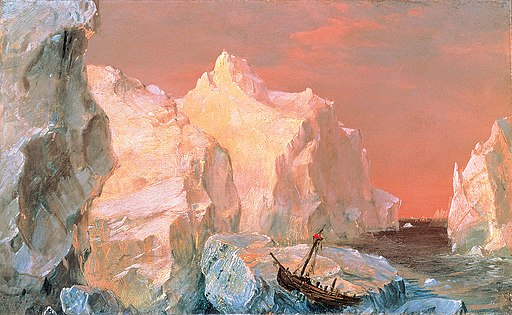 An 1860 study for “The Icebergs” by Frederic Edwin Church –  Kennedy Galleries, New York

A broadside was prepared to orient exhibition visitors to the painting:

“The spectator … standing on the ice, in a bay of the berg.
The several masses are parts of one immense berg.
Imagine an amphitheater, upon the lower steps of which you stand,
and see the icy foreground at your feet,
and gaze upon the surrounding masses,
all uniting in one beneath the surface of the sea…
Thus the beholder has around him the manifold forms of the huge Greenland glacier
after it has been launched upon the deep,
and subjected, for a time, to the action of the elements—waves and currents, sunshine and storm.”

The lack of apparent narrative or allegory perplexed some traditional viewers motivating Church to add the ship mast to the painting after its exhibition and before its eventual sale.

Nearly 30 years later, in 1900, Frederic Edwin Church was stricken with arthritis in his painting hand, but he painted another version of “The Iceberg,” it was one of his last paintings.

This version was a simpler composition picture to memorialize his experience. The sixty-five old symbolized his lonely confrontation as a ship of yesteryear sailing for safety from the drifting, isolated, and indifferent elements.

Unlike his previous exhilaration with scientific truth, he is focused on the quiet beauty and mystery. The painting is an introspection of a life that would end nine-year later.

Church was pleased with the painting, writing to a friend that it was:

“the best I ever painted and the truest.” 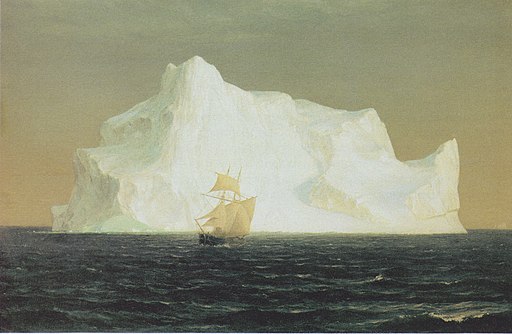 “The Icebergs” by Frederic Edwin Church, 1891