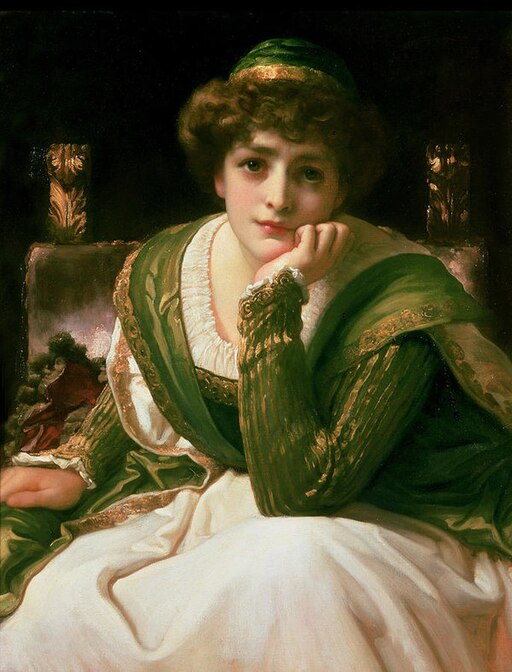 “Desdemona” by Frederic Leighton depicts the Venetian beauty from William Shakespeare’s play Othello which was written in 1601 – 1604.

Desdemona’s story starts when she enrages her father, a Venetian senator, when she elopes with Othello. Othello is a brave soldier of Moorish background in the service of the Venetian Republic, but several years her senior.

Othello has its source in a 1565 Italian tale, which may have been based on an actual incident occurring in Venice about 1508.

The only named character in the original story is “Disdemona.” The name derives from Greek, which means “ill-fated, unfortunate.”

In the original tale, the ensign lusts after Disdemona and is spurred to revenge when she rejects him.

While Shakespeare followed the original tale’s influence in composing Othello, he deviated significantly in many details.

In Shakespeare’s play, Desdemona is deeply upset by her husband’s attacks but continues to assert her love.

In the final act, Othello tells her that he knows she has been unfaithful and is going to kill her.

Despite Desdemona’s claims of innocence, Othello refuses to believe her. Othello strangles Desdemona in his paranoia.

The role of Desdemona has attracted many notable actresses through the centuries, and Margaret Hughes (1645 – 1719), the first professional actress on the English stage, has the distinction of being the first to perform the role in 1660.

Shakespeare: Othello – Summary and Analysis of the Theme of Love

The 10 Most Important Quotes in Othello

“Let husbands know
Their wives have sense like them.”
– Shakespeare, Othello