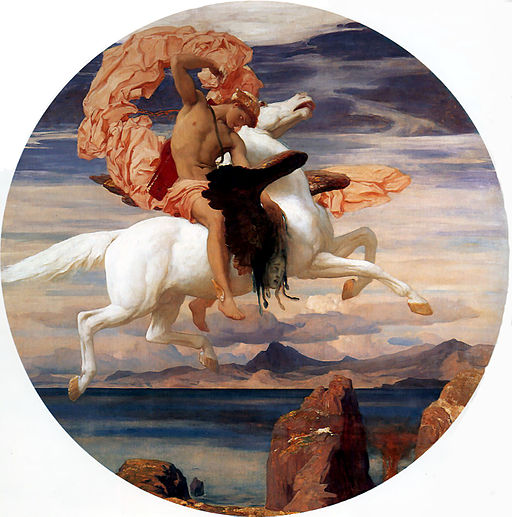 Perseus is carrying the head of the slain Medusa, with hair of snakes, whose gaze even after death would turn the beholder to stone.

In Greek mythology, Perseus is the legendary founder of Mycenae. He was the great Greek hero and slayer of monsters before the days of Heracles.

Perseus was the son of Zeus and Danaë, the daughter of Acrisius, King of Argos.  Acrisius consulted the oracle at Delphi, who warned him that he would one day be killed by his daughter’s son.

King Acrisius was fearful for his future, so he cast mother and child into the sea in a wooden chest. Danaë and child were discovered and taken in by the fisherman Dictys, who raised Perseus to manhood.

When Perseus was grown, Polydectes, the King of the island where he lived, fell in love with his beautiful mother, Danaë. Perseus protected his mother from him, but Polydectes plotted to eliminate Perseus.

Polydectes caught Perseus with a rash promise, and he demanded the head of the only mortal Gorgon, Medusa, whose gaze turned people to stone.

Athena helped Perseus, and he found Medusa in a cave. By viewing Medusa’s reflection in his polished shield, he safely cut off her head.

Perseus On Pegasus Hastening To the Rescue of Andromeda

“Perseus and Andromeda” by Frederic Leighton

“Perseus and Andromeda” by Frederic Leighton dramatically portrays the Greek mythological story of Andromeda. In contrast to the classic Greek origins of the tale, Leighton used a Gothic style for the artwork.

Perseus is depicted flying above on his winged horse Pegasus. He shoots an arrow that hits the sea monster, who turns to attack the hero.

Andromeda’s white body is contrasted against the dark masses of the monster’s wing, and depicted as pure innocence. A halo of light surrounds Pegasus and Perseus.

In Greek mythology, Andromeda was the daughter of the King and Queen of Ethiopia. Her mother, the beautiful, but vain Queen boasted that Andromeda, her daughter was more beautiful than all the sea nymphs.

Poseidon, to punish the Queen for her hubris, called up a sea monster to wreak havoc on Ethiopia, and this monster placed the kingdom at risk.

In response, the Queen, together with the King, decided to sacrifice their daughter, Princess Andromeda, to the beast.

Andromeda was chained to a rock as an offering to the monster. Fortunately, Perseus was traveling home on his winged horse, Pegasus, after battling and killing with Medusa.

He rescued Andromeda by killing the beast. The couple fell in love, but the Princess was already betrothed to Phineus.

Perseus challenged Phineus at the wedding, but the fight was drawn to a conclusion when Phineus was turned to stone after Perseus revealed the head of Medusa to Phineus.

Perseus had killed Medusa, but any mortal man who looked on Medusa’s dead face could still turn to stone.

A Tour of Perseus in Art