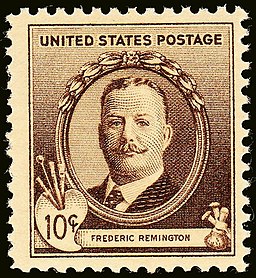 Frederic Remington (1861 – 1909) was an American painter, illustrator, and sculptor specializing in the American Old West’s depictions.

Remington’s artworks depict the Western United States at the end of the 1800s, featuring such images as cowboys, American Indians, and the United States Cavalry.

His style was naturalistic, sometimes impressionistic, and his focus was on the West’s men and animals, with landscape usually of secondary importance.

His skillful portrayal of horses and his action-packed portrayal of the American frontier became iconic western images popular in the imagination of cowboy and Indian stereotypes.

The landscape and dramatic human events deeply influenced him. He used his sketchbooks to capture the color and the quality of the light. Remington took photographs with the latest equipment and collected artifacts to use in his paintings.

Remington was one of the first American artists to illustrate the true gait of the horse in motion. Previously, horses in full gallop were usually depicted with all four legs pointing out.

The galloping horse became Remington’s signature subject, copied and interpreted by many Western artists who followed him, adopting the correct anatomical motion.

Though criticized by some for his use of photography, Remington often created depictions that slightly exaggerated natural motion to satisfy the eye.

Remington eagerly acquired many authentic artifacts later used as props and made many photos and sketches valuable for later paintings.

“The Smoke Signal” by Frederic Remington depicts three Plains Indians sending a smoke signal using a blanket and white smoke.  In general smoke signals, were used to transmit an agreed message, signal danger, or gather people to a common area.

North American indigenous peoples communicated via smoke signal, and each tribe had its own signaling system and understanding. A single smoke, ascending naturally, was usually a warning to all Indians that strangers are approaching.

A signaler started a fire on an elevation typically using damp grass, which would cause a column of smoke to rise. The grass would be taken off as it dried, and another bundle would be placed on the fire.

The location of the smoke along a hill’s incline conveyed a meaning. If it came from halfway up the hill, this would signify all was well, but it would signify danger from the top of the hill.

The Native Americans used buffalo chips or prairie grass for fire and smoke as a practical system for sending messages, especially if the terrain between the two parties was hilly or covered by trees.

A Dash for the Timber

“A Dash for the Timber” by Frederic Remington depicts eight mounted cowboys and a packhorse in full gallop ahead of a pursuing war-party of Indians also on horseback. Three riders shoot over their shoulders as they race for the cover of the trees ahead.

The blue sky above and the purple shadows below contrasts with the orange-peach ground and the horse gallop’s white dust. The composition engages the audience as the fleeing riders gallop directly toward the viewer.

His skillful portrayal of the horses with nostrils flaring and muscle strained to their limits, and the gritty determination of the riders anticipated the many western films that were to follow a generation later.

The overall effect of this large canvas is a cinematic and action-filled portrayal of the American frontier. Compositions such as this one made Remington’s iconic western images popular in the imagination of cowboy and Indian stereotypes.

Remington painted this picture in 1889, at the age of twenty-eight in his studio after several trips to the Southwest. He was welcomed to observe the activities of the U.S. Cavalry and its pursuit of renegade Apaches.

“I knew the wild riders and the vacant land were about to vanish forever…
And the more I considered the subject, the bigger the forever loomed.
Without knowing how to do it, I began to record some facts around me,
and the more I looked, the more the panorama unfolded..”
– Frederic Remington