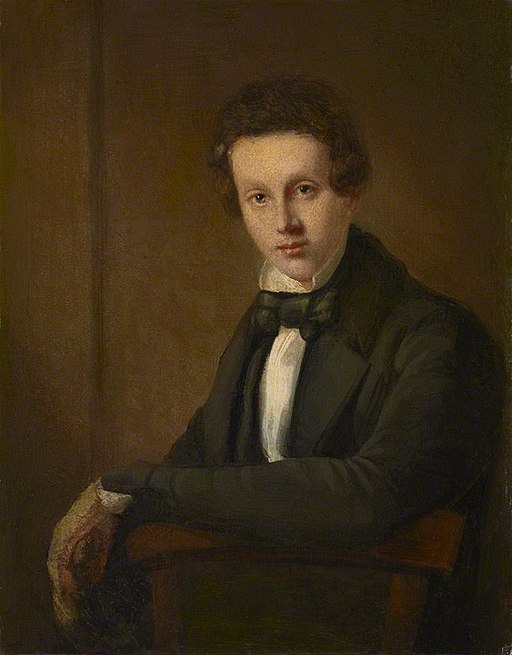 Frederick Sandys (1829 – 1904) was an English painter and illustrator associated with the Pre-Raphaelites and with the Norwich School of painters.

“Queen Eleanor” by Frederick Sandys depicts Queen Eleanor of Aquitaine, the wife of King Henry II of England, on her way to poison her husband’s mistress, Rosamund Clifford.

The traditional story recounts that King Henry concealed his affair from Queen Eleanor by conducting it within the innermost recesses of a complicated maze.

Queen Eleanor penetrated the labyrinth to Rosamund’s bower while trailing a red cord. The red thread is shown in her left hand.

The Queen then and forced her rival to choose between a dagger and a bowl of poison. Fair Rosamund chose the poison and died.

“Morgan-le-Fay” by Frederick Sandys portrays the Arthurian witch, and King Arthur’s protector, Morgan le Fay. In some versions of the King Arthur story, she is also known as Morgana and is King Arthur’s secret adversary.

Morgan le Fay, which means “Morgan the Fairy,” was a powerful enchantress in the Arthurian legends. Early references to Morgan as a witch, or sorceress, present her as generally benevolent and related to King Arthur as his magical savior and protector.

Her prominence in Arthurian legends increased over time, as did her moral ambivalence, and in some later texts, she becomes the antagonist. Morgan’s medieval and later iterations present her with an unpredictable duality and with the potential for both good and evil.

“Mary Magdalene” by Frederick Sandys depicts Mary in front of a patterned forest-green damask. She holds an alabaster ointment cup, a traditional attribute which associates her with the woman who anointed Jesus’ feet.

Mary Magdalene was a Jewish woman who traveled with Jesus as one of his early and closest followers and was a witness to his crucifixion and burial. She was the first to witness the resurrection of Jesus.

“Medea” by Frederick Sandys depicts a half-length seated figure with her head tilted slightly to her right. She claws at her necklace whilst pouring liquid from a beaker into a lit burner as she calls on her powers.

Her long hair is loose. She wears a headband, long earrings, and white clothing. On the left in the foreground is a pair of copulating toads and a small Egyptian sculpture.

The two copulating toads in the front left of the picture symbolize her lover’s infidelity. The Egyptian cat god, abalone shell, and the dried sting ray signify her use of dark magic.

She sits in front of a gold background decorated with a ship and the golden fleece hanging in a grove of trees, which echo her adventures with Jason and the Argonauts.

Her necklace is made of coral; the stone is thought to protect children from evil. Her clawing action symbolizes her hatred of Jason sho has abounded her.

Sandys specialized in half-length figures of beautiful but often destructive women. Sandys’s meticulous attention to detail is typical of the Pre-Raphaelite school.

Sandys’ images of female beauty are iconic renderings of alluring and mysterious women that represent his unique style.

By the early 1860s, he began to exhibit the paintings which set his reputation. The dominant influences on his art were conceptions of tragic power.

The somber intensity and stern beauty in his art meant that his art was not always popular.

“The purest and most thoughtful minds are those which love color the most.”
– John Ruskin