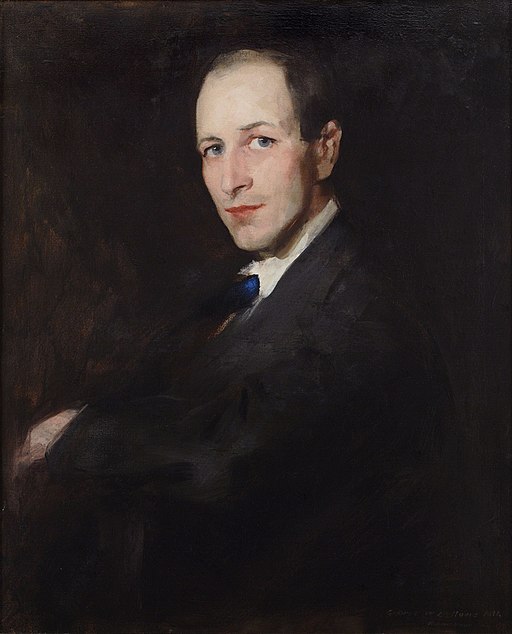 George Bellows (1882 – 1925) was an American realist painter known for his bold depictions of urban life in New York City. Bellows was part of the Ashcan School, which was an artistic movement in the United States during the early 20th century.

Some critics called new York Realists the “apostles of ugliness.” One critic conferred the pejorative label “Ashcan School” to their at, and it became the standard term for this first significant American art movement of the 20th century.

The city grew from one-and-a-half to five million in the forty years proceedings this depiction, primarily due to immigration.

In this painting, people spill out of tenement buildings onto the streets, stoops, and fire escapes. Laundry flaps overhead, and a street vendor hawks his goods from his pushcart amid all the traffic.

In the background, a trolley car heads toward Vesey Street. Many of the new arrivals, Italian, Jewish, Irish, and Chinese, crowded into tenement houses on the Lower East Side.

Among them were thousands of Eastern European Jews, who found temporary or permanent shelter along streets such as East Broadway, the setting for Cliff Dwellers.

Men of the Docks

“Men of the Docks” by George Bellows depicts a group of men wearing overcoats, standing at a dock in Brooklyn, New York City, together with some draught horses.

A steam liner looms over them to their right, and in the center is a tugboat. The waters are iced up by winter, and in the background are the skyscrapers of the lower Manhattan skyline.

The winter weather seems bleak and grey as the men look for work at the docks. The men are looking to the left, and we can only speculate about what has drawn their attention.

Is it news that no work is available or a notice that the men are required for labor. In the early 20th century, day laborers in the New York docks worked depending on the availability of ships to unload.

When not working, they often stood nearby, waiting for news that there was work. This painting is a significant example of Bellows’ treatment of the subject in which he emphasizes the precariousness of the laborers’ situation.

“River Front No. 1” by George Bellows depicts the city’s poor boys bathing at the riverfront docks, on a hot day. Bellows took an ordinary urban subject and celebrated it with color.

The contrast between the blues and the pale bodies and the explosion of human diversity all draw our attention.

Bellows painted many river scenes throughout his career, and he also focused on the human form in a number of his works. His urban New York scenes depicted the chaos of working-class people and neighborhoods.

Bellows developed his keen sense of light by exhibiting a stark contrast between the blue and pale colors in his art.

He was also an expert in creating visual texture in depicting the rough and grimy city structures and in creating an aesthetically ironic image.

New York by George Bellows is a large painting that captures the essence of modern life in New York City in 1911. The view looks uptown toward Madison Square from the intersection of Broadway and 23rd Street, but Bellows drew on several commercial districts to create an imaginary composite.

His focus was to show the crowds and traffic to convey a sense of the city’s hectic pace. Bellows assembled all of these diverse elements of New York into one scene.

As one critic commented: “Trucks are darting through the crowd. Men and women are hurrying across the streets. Trolleys are clanging their way in and out, a policeman is keeping people from being run over, you feel the rush; you hear the noise, and you wish you were safely home.”

The work is painting in the style of the Ashcan School movement, and it has become Bellows’ most famous painting. Bellows gave himself a cameo as the balding man at the extreme left of the picture.

The fight was a historic boxing fight. It was the first time that a Latin American fighter would challenge for the World Heavyweight title, and it was one of the defining matches of Dempsey’s career.

The painting’s title is a reference to the practice in private athletic clubs of introducing the contestants to the audience as “both members” to circumvent the law.

This painting follows the success of the African American professional prizefighter Jack Johnson, who had won the world heavyweight championship in 1908.

The idea of a black boxing champion was unsettling to then social order. Museum:   National Gallery of Art, DC

The Art of Boxing

George Bellows: A collection of 266 works

“Try everything that can be done. Be deliberate. Be spontaneous. Be thoughtful and painstaking. Be abandoned and impulsive. Learn your own possibilities.”

“The artist is the person who makes life more interesting or beautiful, more understandable or mysterious, or probably, in the best sense, more wonderful.”

“I found myself in my first art school under the direction of Robert Henri… My life began at this point.”

“The aim of art is to represent not the outward appearance of things, but their inward significance.”

“Art strives for structure and aspires for magnificence. “

“The artist is the person who makes
life more interesting or beautiful,
more understandable or mysterious, or probably,
in the best sense, more wonderful.”
– George Bellows