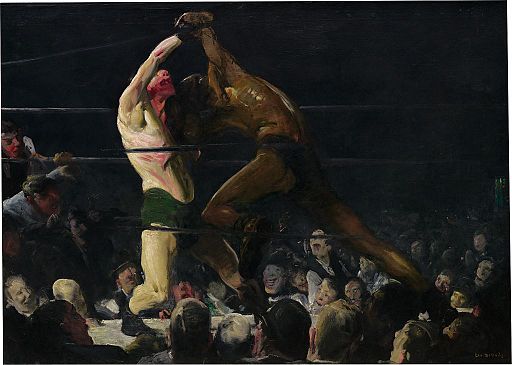 The painting’s title refers to the practice in private athletic clubs of introducing the contestants to the audience as “both members” to circumvent the law.

This painting follows the success of the African American professional prizefighter Jack Johnson, who had won the world heavyweight championship in 1908. The idea of a black boxing champion was unsettling to then social order.

Painted the era of Jim Crow laws, Bellows’s painting showing a white fighter about to be defeated by a black boxer was a provocative social commentary. Many believed that interracial boxing should be outlawed.

The legal principle of “separate but equal” racial segregation was extended to public facilities and transportation, including the coaches of interstate trains and buses.

As a body of law, Jim Crow institutionalized economic, educational, and social disadvantages for African Americans and other people of color.

In 1954, segregation of public schools was declared unconstitutional by the U.S. Supreme Court. In some states, it took many years to implement this decision.

The Ancient History of Boxing

The earliest known depiction of boxing comes from a Sumerian relief from over 4,000 years ago. A relief sculpture from Egyptian Thebes dated to 1350 BC shows boxers and spectators.

These early Middle-Eastern and Egyptian depictions showed contests where fighters were either bare-fisted or had a band supporting the wrist.

The earliest evidence of fist-fighting with gloves can be found on Minoan Crete about 1500 BC.

Various types of boxing existed in ancient India. The earliest references come from Vedic epics such as the Ramayana and Rig Veda.

In Ancient Greece, boxing was a well-developed sport and enjoyed consistent popularity. In Olympic terms, it was first introduced in the 23rd Olympiad, 688 BC.

Boxing was a popular spectator sport in Ancient Rome, and fighting events were held at Roman Amphitheatres.

Records of Classical boxing disappeared after the fall of the Western Roman Empire when the wearing of weapons became common once again, and interest in fighting with the fists waned.

In Modern history, as the wearing of swords became less common, there was renewed interest in fencing with the fists. The sport resurfaced in England during the early 16th century in bare-knuckle boxing, sometimes referred to as prizefighting.

The first documented account of a bare-knuckle fight in England appeared in 1681. This is also the time when the word “boxing” first came to be used.

Bellows was part of the Ashcan School, an artistic movement in the United States during the early 20th century.

Best known for works portraying daily life scenes in New York, often in the city’s poorer neighborhoods. The movement has been seen as symbolic of the spirit of political rebellion of the period.

“The artist is the person who makes life more interesting or beautiful, more understandable or mysterious, or probably, in the best sense, more wonderful.”
– George Bellows