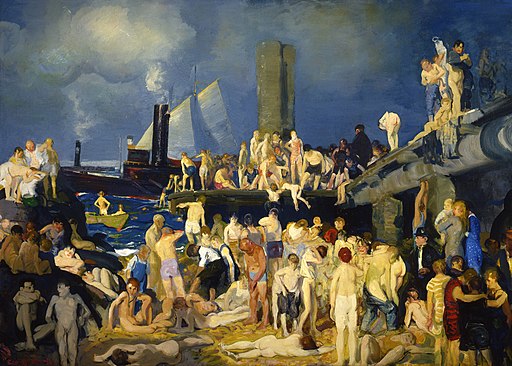 “River Front No. 1” by George Bellows

“River Front No. 1” by George Bellows depicts the city’s poor boys bathing at the riverfront docks on a hot day. Bellows took an ordinary urban subject and celebrated it with color.

The contrast between the blues and the pale bodies and the explosion of human diversity draws our attention.

Bellows painted many river scenes throughout his career, and he also focused on the human form in a number of his works.

His urban New York scenes depicted the chaos of working-class people and neighborhoods.

Bellows developed his keen sense of light by exhibiting a stark contrast between the blue and pale colors in his art.

He was also an expert in creating visual texture to depict the rough and grimy city structures and create an aesthetically ironic image.

The Ashcan School, also called the Ash Can School, was an artistic movement in the United States during the late 19th-early 20th century. It is best known for works portraying daily life scenes in New York, often in the city’s poorer neighborhoods.

The term was slowly applied to many painters beyond the original “Philadelphia Five,” including George Bellows and Edward Hopper.

Like many art-historical terms, “Ashcan art” has sometimes been applied to so many different artists that its meaning has become diluted.

The name “Ashcan school” is a tongue-in-cheek reference to other “schools of art.” Its origin is in a complaint alleging that there were too many “pictures of ashcans.” The reference amused the artists, and the name stuck.

Bellows was part of the Ashcan School, an artistic movement in the United States during the early 20th century.