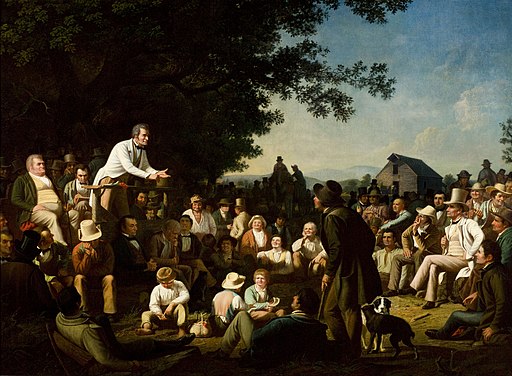 “Stump Speaking” by George Caleb Bingham is the second painting in the artist’s Election Series showing the Missouri voting process. This painting depicts a politician attempting to persuade the audience to vote in his favor.

Bingham depicted three key figures that stand out due to their bright white clothing. The three figures symbolized Bingham’s views of “the past,” “the present,” and “the future” of American politics.

Firstly the “Outstanding Citizen” who is sitting man opposite the Speaker with the larger wite tophat. Bingham’s sketch refers to this figure as representing “the past” as the man’s sharp edges and fine clothes show how he is unwilling to bend his beliefs.

The “Stump Speaker” has softer curves that represent “the present” of American politics, in which the figure is swaying the assembled crowd by bending to the people’s desires, shown by the curving arm that is outstretched to the audience.

The crucial third figure is the “Small Businessman” represented by the young adult below the speakers’ hands, counting his money, representing “the future.”

This figure represents Bingham’s views on how people are starting to focus more on their money and less on politics. The character also is depicted detached from the debate surrounding him.

The three figures represent “the past” of gentlemen farmers. “The present” of party hacks and “the future” of materialistic isolated citizens.

Bingham’s painting had both a national message and a local message. Some of the people portrayed in the pictures resemble local Missouri politicians.

Behind the Speaker sits a man resembling Bingham’s self-portrait taking notes about the speech, waiting for his turn to speak.

In a letter to a friend, Bingham described the candidates:

“In my orator, I have endeavored to personify a wiry politician,
grown gray in the pursuit of office and the service of the party.
His influence upon the crowd is quite manifest,
but I have placed behind him a shrewd clear-headed opponent,
who is busy taking notes, and who will when his turn comes,
make sophisms fly like cobwebs before the housekeeper’s broom.”

The Speaker resembled Bingham’s opponent in his previous elections, and the person sitting next to Bingham resembles the ex-governor of Missouri, Meredith Marmaduke.

Their audience comprises men of various social standings, some of whom listen closely to the speaker, while others converse or struggle to remain interested.

Bingham ran for election and appeared to have won in 1846 by 3 votes but lost in a recount. He ran again as a Whig to the Missouri House of Representatives in 1848 and won by a decisive margin.

He became one of the few artists to serve in elected political office, and Bingham’s political interests would be reflected in his vivid paintings of frontier political life.

Bingham’s Election Series spread his idea of free people and free institutions, and Bingham exhibited his paintings in Washington.

During that war, although born in Virginia, Bingham was dedicated to the Union cause. He became captain of a volunteer company, which helped keep the state from joining the Confederacy and then served four years as Missouri’s Treasurer. During his final years, Bingham held several offices in Kansas City.

His paintings of American frontier life along the Missouri River exemplify the Luminist style. However, as an artist, Bingham’s reputation languished by the turn of the century.

In 1934, the St. Louis Art Museum held a retrospective exhibition of his work, and interest in his art increased. Art historians noticed his depictions of ordinary people from the middle of the previous century, as better known, and appreciation of his work grew.

By the early 2000s, Bingham was considered one of the greatest American painters of the 19th century. Over twenty newly discovered paintings by Bingham have been authenticated with the increased interest in his art.

The American Artist: The Life & Times of George Caleb Bingham

“The ballot is stronger than the bullet.”
– Abraham Lincoln