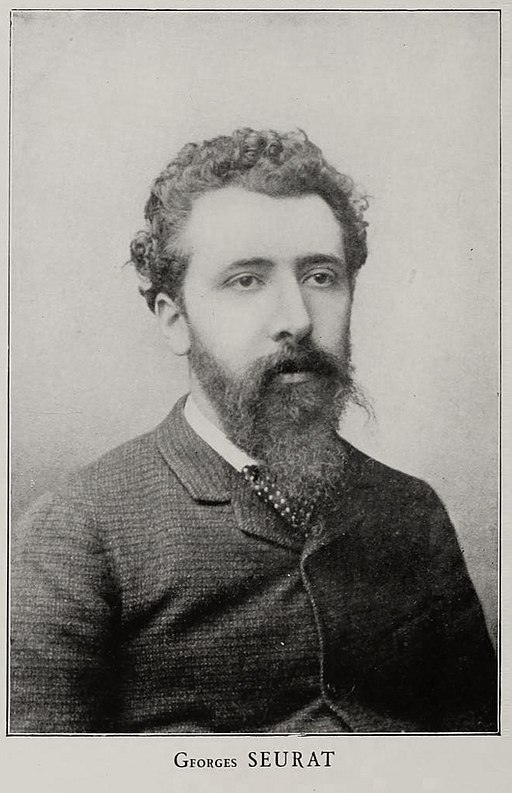 Georges-Pierre Seurat (1859 – 1891) was a French post-Impressionist artist. He is best known for devising the painting techniques known as chromoluminarism and pointillism.

Seurat died in 1891 at the age of 31. The cause of his death is uncertain and has last ambitious work, The Circus, was left unfinished at the time of his death.

A Virtual Tour of Georges Seurat

“Bathers at Asnières” by Georges Seurat depicts a brilliant Seine River scene near a working-class suburb of Paris, over 100 years ago.

On the right-hand foreground of the canvas are two young bathers in the water and one on the grassy riverbank.

On the left are four figures and a dog resting on the river bank, enjoying the water views. In the background are trees, buildings, walls, a bridge, and several smoking industrial chimneys.

Seurat spent most of 1883 working on this large canvas, which was his first major painting.

Influenced by Impressionism in the use of color and light, however, departing from the Impressionist style, Seurat used a combination of sophisticated brush stroke techniques and meticulous planning for the application of contemporary color theory.

He achieved a unique vibrancy and timelessness to this masterpiece. Museum: National Gallery, London

A Sunday Afternoon on the Island of La Grande Jatte

“A Sunday Afternoon on the Island of La Grande Jatte” is one of Georges Seurat’s most famous works, and is a leading example of pointillism technique on a large canvas.

Seurat’s composition depicts Parisians at a provincial park on the banks of the River Seine. Seurat was one of the leaders of a new and rebellious form of Impressionism called Neo-Impressionism.

This large-scale work, altered the direction of modern art by initiating Neo-impressionism and is one of the icons of late 19th-century painting.

Seurat spent over two years painting this masterpiece, and he focused on the landscape of the park with meticulous detail.

He reworked the original and completed many preliminary drawings and oil sketches. He concentrated on issues of color, light, and form.

The Island of La Grande Jatte, when Seurat began the painting in 1884, was a rural retreat far from the city center. Today it is part of a Paris business district. Museum: Art Institute of Chicago 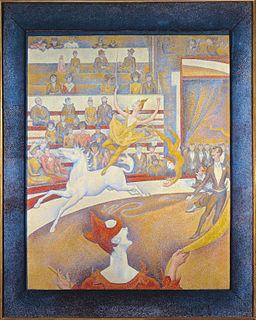 “The Circus” by Georges Seurat depicts a female circus performer standing on a white horse plus various other acts at a Paris circus of the late 1890s.

At that time, circuses and entertainment spectacles had become a favored subject for artists portraying modern life. Seurat’s painting is divided into two parts, with the circus artists occupying the lower right, characterized by curves and spirals creating a sense of movement, and the audience filling the upper left, confined to rows of benches.

The audience shows the distinctions between social classes sitting in rows. In the front rows sit the well-dressed wealth classes and in the gallery at the back stand the poorer classes.

The white-faced clown creates a sense of space in the foreground and the tiers of bleachers. A pair of clowns are also tumbling behind the ringmaster.

The circus was a popular entertainment in Paris and was depicted in the 1880s by other artists such as Renoir, Degas, and Toulouse-Lautrec.

Seurat used a Neo-Impressionist Divisionist style, with pointillist dots creating a sense of different colors. The work is dominated by white and the three primary colors, mainly red and yellow, with blue shading. Museum: Musée d’Orsay

“Le Chahut” by Georges Seurat representing the Can-Can dance at the Moulin Rouge in the artist’s pointillist technique.

The Can-Can is a high-energy, physically demanding dance that became a famous French music-hall dance in the 1840s. The Can-Can or “Le Chahut” in French was initially danced by both sexes, as depicted by Seurat.

The dance featured the vigorous manipulation of skirts and petticoats by the women, along with high kicks.

Musicians occupy the lower left of the painting, one of whom is centrally located, his back turned toward the viewer, with his double-bass erected to the left.

A row of dancers, two women, and two men with their legs raised occupy the upper right. They are characterized by curves and rhythmic repetition, creating a sense of dynamical movement.

Divisionism (also called Chromoluminarism) was the characteristic style in Neo-Impressionist painting defined by the separation of colors into individual dots or patches which interacted optically.

By requiring the viewer’s eye to combine the colors optically instead of physically mixing pigments, Divisionists believed they were achieving the maximum luminosity scientifically possible.

Georges Seurat founded the style around 1884 as chromoluminarism, drawing from his understanding of the available scientific theories of his time.

Divisionism developed along with another technique, Pointillism, which is explicitly defined by the use of dots of paint and does not necessarily focus on the separation of colors.

Pointillism is a technique of painting in which small, distinct dots of color are applied in patterns to form an image.

Georges Seurat and Paul Signac developed the method in 1886, branching from Impressionism.

The term “Pointillism” was coined by art critics in the late 1880s to ridicule the works of these artists and is now used without its earlier mocking connotation.

The movement Seurat began with this technique is known as Neo-impressionism. The Divisionists, too, used a similar method of patterns to form images, though with broader cube-like brushstrokes.

“Painting is the art of hollowing a surface.”

“Originality depends only on the character of the drawing and the vision peculiar to each artist.”

“Harmony is the analogy of contrary and similar elements of tone, of color, and of line, conditioned by the dominant key, and under the influence of a particular light, in gay, calm, or sad combinations.”

“They see poetry in what I have done. No. I apply my methods, and that is all there is to it.”

“Let’s go and get drunk on light again – it has the power to console.”

“Originality depends on the character of the drawing and the vision peculiar to each artist.”

“Some say they see poetry in my paintings; I see only science.”
– Georges Seurat