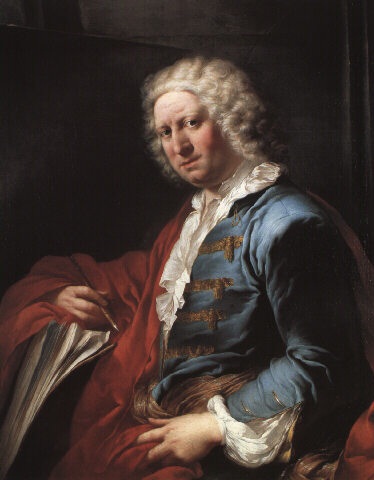 Giovanni Paolo Panini (1691 – 1765) was a painter and architect who worked in Rome and is primarily known of his vedutisti  or “view painters.”

Among his most famous works is his view of the interior of the Pantheon, and his vedute—paintings of picture galleries containing views of Rome.

Most of his works, especially those of ruins, have a fanciful and unreal embellishment characteristic of imagined architectural themes.

Panini’s style influenced other vedutisti, such as Antonio Joli, Canaletto, and Bernardo Bellotto.

They all sought to meet the need of visitors for painted “postcards” depicting the Italian monuments and views.

Panini populated the scene with foreign visitors. He featured a diverse mix of Romans and visitors from all parts of society. They congregate in the Pantheon to pray and to admire the fantastic architecture. Museum:        National Gallery of Art, DC

“Picture Gallery with Views of Modern Rome” by Giovanni Paolo Panini is the name given to each of three almost identical paintings by the celebrated Italian artists in the 1750s.

The picture gallery consists of a large number of paintings of buildings, monuments, and sculptures in Rome during the time that Panini painted this painting.

It is not a depiction of an actual gallery but rather an extravagant souvenir commissioned by the French ambassador to the Vatican to commemorate his stay in Rome.

The original painting shows the arrangement commissioned by the Count of Stainville. He was the ambassador to Rome from between 1753 and 1757.

“Imaginary Gallery of Ancient Roman Art” is the title given to each of three almost identical paintings by Giovanni Paolo Panini. The paintings were produced as pendant paintings to “Picture Gallery with Views of Modern Rome.”

This imaginary picture gallery consists of a large number of paintings of buildings, monuments, and sculptures from Ancient Rome, which were viewable during the time that Panini painted this painting.

It is not a depiction of an actual gallery but rather an extravagant souvenir commissioned by the French ambassador to the Vatican to commemorate his stay in Rome. The Count of Stainville ordered them. He was the ambassador to Rome from between 1753 and 1757.

The paintings depict many of the most significant architectural sites of ancient Rome, such as the Colosseum, Trajan’s column, and the Pantheon.

It also shows famous ancient sculptures such as Laocoön and His Sons, the Farnese Hercules, the Apollo Belvedere, and the Dying Gaul. Museum: Louvre Museum,  Metropolitan Museum of Art, NY., Staatsgalerie Stuttgart,

Roman Capriccio: The Pantheon and Other Monuments

“Roman Capriccio: The Pantheon and Other Monuments” by Giovanni Paolo Panini depicts an array of famous Roman monuments in a rural setting.

Panini was a famed painter of capriccios or architectural fantasies. This composition has combined several ancient buildings and monuments from Roman into one convenient location without regard to actual topography.

From left to right, he included the Temple of Hadrian, the Pantheon, the Temple of Vesta, the Maison Carrée, and the Theater of Marcellus, and the Obelisk of Thutmose III.

In the center is the Equestrian Statue of Marcus Aurelius, around which are shown ancient Roman peasants living their ideal lives.

These capriccio paintings were created for wealthy European youths who undertook the Grand Tour, about two to three hundred years ago. They could afford to bring back beautiful paintings as souvenirs and as memories of their travels. Museum:  Indianapolis Museum of Art