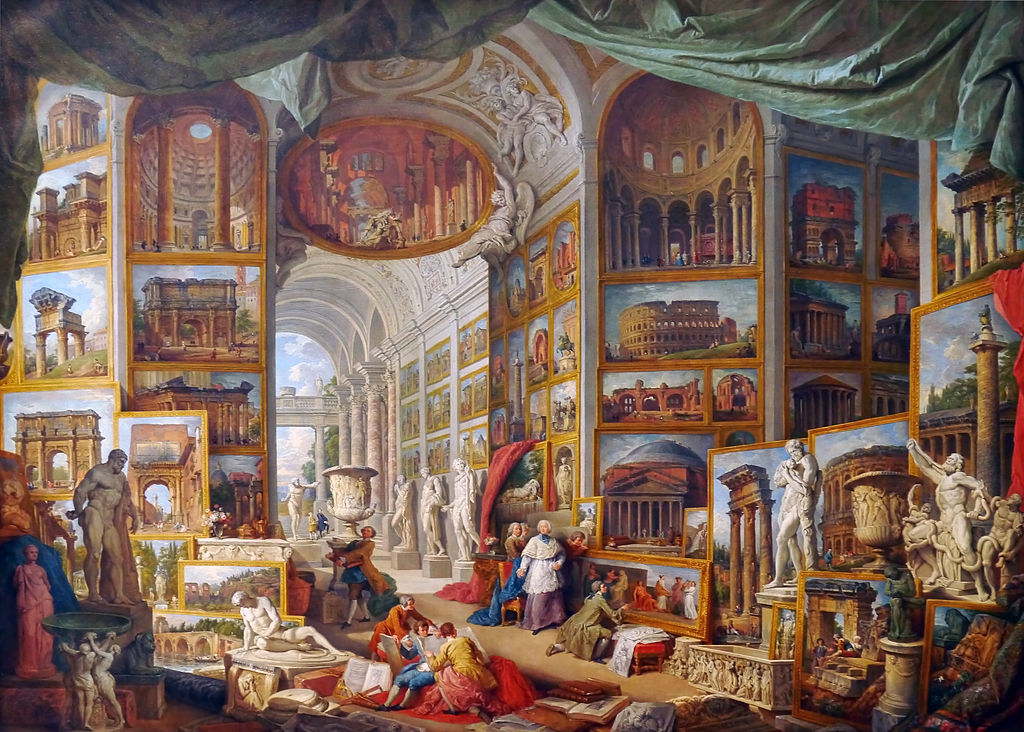 “Imaginary Gallery of Ancient Roman Art” is the title given to each of three almost identical paintings by Giovanni Paolo Panini. The paintings were produced as pendant paintings to “Picture Gallery with Views of Modern Rome.”

This imaginary picture gallery consists of a large number of paintings of buildings, monuments, and sculptures from Ancient Rome, which were viewable during the time that Panini painted this painting.

It is not a depiction of an actual gallery but rather an extravagant souvenir commissioned by the French ambassador to the Vatican to commemorate his stay in Rome. The Count of Stainville ordered them. He was the ambassador to Rome from between 1753 and 1757.

The paintings depict many of the most significant architectural sites of ancient Rome, such as the Colosseum, Trajan’s column, and the Pantheon.

It also shows famous ancient sculptures such as Laocoön and His Sons, the Farnese Hercules, the Apollo Belvedere, and the Dying Gaul.

The three versions of “Imaginary Gallery of Ancient Roman Art,” in order of creation, are located in the Staatsgalerie Stuttgart, the Metropolitan Museum of Art in New York and the Louvre in Paris.

The Metropolitan Museum of Art and the Louvre each hold a version of Panini’s companion piece, “Picture Gallery with Views of Modern Rome.”

Both the artist, Panini, and the patron  Stainville are featured in the painting. Stainville is standing, while Panini appears behind Stainville’s armchair.

In the Metropolitan Museum of Art and Staatsgalerie Stuttgart version Stainville is standing holding a guidebook. In the Louvre version, he is wearing his official ceremonial dress and not holding a handbook. 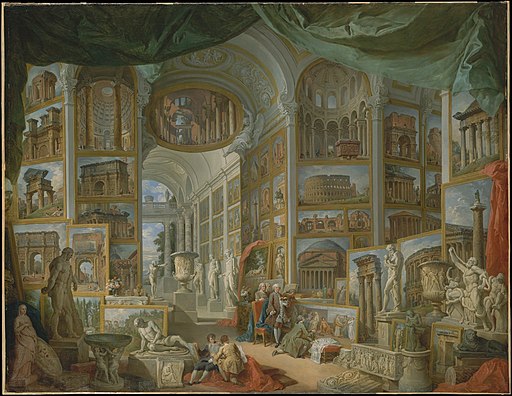 In art, a pendant is one of two paintings, statues, or other types of works of art intended as a pair. Typically, pendants are related thematically to each other and are displayed nearby.

Pendants may be the creation of one artist alone or be the product of two artists and have, in that case, sometimes a competitive edge.

Many historic pendants have become separated over the years.

Gallery of Views of Ancient Rome