Giuseppe Arcimboldo (1527 – 1593) was a painter best known for creating imaginative portrait heads made entirely of objects such as fruits, vegetables, flowers, fish, and books.

He was a conventional court painter of portraits for three Holy Roman emperors in Vienna and Prague. He also painted religious subjects and, among other things, a series of colored drawings of exotic animals in the imperial menagerie.

However, today he is best known for his symbolical compositions of fruits, animals, landscapes, or various objects arranged into human forms.

The still-life portraits were intended as whimsical curiosities to amuse the court. His art also engaged with Renaissance Neo-Platonism or other intellectual trends of the day.

Self Portrait by Giuseppe Arcimboldo 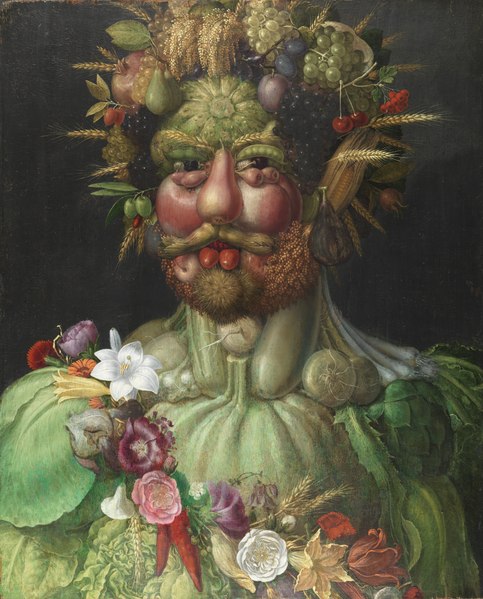 Arcimboldo’s portraits of human heads made up of vegetables, plants, fruits, sea creatures, and tree roots were much admired by his contemporaries and remain a source of fascination today.

Vertumnus is Arcimboldo’s most famous work and is a portrait of the Holy Roman Emperor Rudolf II re-imagined as Vertumnus, the Roman god of metamorphoses in nature and life.

The fruits and vegetables symbolize the abundance of the Golden Age that has returned under the Emperor’s rule.

Rudolf II (1552 – 1612) was Holy Roman Emperor, King of Hungary and Croatia, King of Bohemia, and Archduke of Austria. He was a member of the House of Habsburg.

Rudolf has a mixed legacy, which is overshadowed by his mistakes that led directly to the Thirty Years’ War. However, he was also a great and influential patron of art and an intellectual devotee of learning, which helped seed what would be called the scientific revolution.

At a distance, Giuseppe Arcimboldo’s portraits looked like ordinary human portraits. However, individual objects in each painting were overlapped together to make various anatomical shapes of a human.

The assembled objects in each portrait were not random but related by characterization. By using everyday objects, the pictures were decoration and still-life paintings at the same time.

His works showed not only nature and human beings, but also how closely they were related.

This painting belongs to a four-part cycle of the Seasons, which was frequently repeated for the Imperial courts in Vienna and Prague.

In the profile of Summer, the cheek and neck area are composed of peach, quince, garlic, onions, yellow beets, and white eggplant.

The mouth and lips are formed of cherries, and the open peapod within imitates a row of teeth. The nose is a young wild cucumber, and the chin is a pear.

The eye is cherry between two small pears. The ear is a dried corncob. The head is completed with a head covering made of fruit and vegetables bedded in greenery, from which emerge oat spikes resembling a hat feather.

The clothing in woven straw and the woven signature and date integrated into the composition.

Art critics debate his paintings, but a majority of scholars hold to the view that given the Renaissance fascination with riddles, puzzles, and the bizarre, Arcimboldo catered to the taste of his times.

With the advent of surrealism, its theorists paid increasing attention to the works of Arcimboldo, and in the first half of the 20th century, many articles were devoted to his legacy and influence..

Painter Arcimboldo and His Unique Style of Portraiture

“Constancy is the complement of all other human virtues.”
– Giuseppe Mazzini