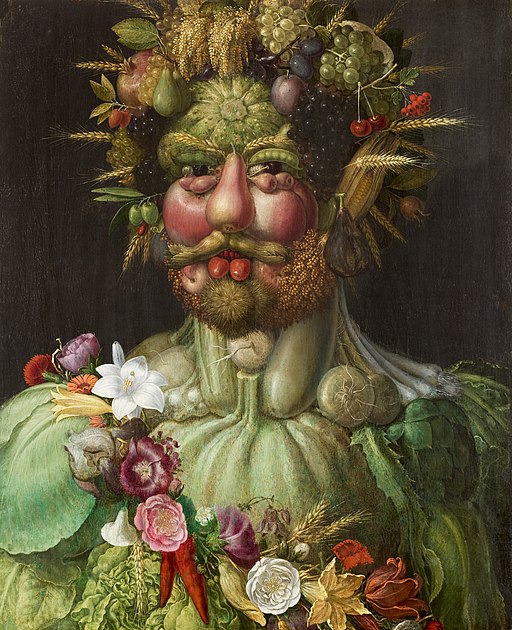 “Vertumnus” by Giuseppe Arcimboldo was created in Milan in 1590. It is a portrait of the Holy Roman Emperor Rudolf II re-imagined as Vertumnus, the Roman god of metamorphoses in nature and life.

Rudolf’s portrait is composed of fruit, vegetables, and flowers that symbolized the artist’s view of the perfect balance and harmony with nature that the Emperor’s reign represented.

Arcimboldo’s unique portraits using the fruits of nature were an expression of the Renaissance mind’s fascination with riddles, puzzles, and the bizarre. His contemporaries much admired his pictures of human heads composed of objects.

Giuseppe Arcimboldo was a Mannerist painter whose traditional religious paintings were later forgotten. But, Arcimboldo’s portraits of human heads made up of vegetables, plants, fruits, sea creatures, and tree roots remain a source of fascination today.

Rudolf II (1552 – 1612) was Holy Roman Emperor, King of Hungary and Croatia, King of Bohemia, and Archduke of Austria. He was a member of the House of Habsburg.

Rudolf has a mixed legacy, which is overshadowed by his mistakes that led directly to the Thirty Years’ War.

However, he was also a great and influential patron of art and an intellectual devotee of learning, which helped seed what would be called the scientific revolution.

Astrology and alchemy were regarded as mainstream scientific fields in Renaissance Prague, and Rudolf was a firm devotee of both.

His lifelong quest was to find the Philosopher’s Stone, and he spared no expense in bringing Europe’s best alchemists to his court.

When Rudolf was a prince, Nostradamus prepared a horoscope which was dedicated to him as ‘Prince and King.’

Rudolf gave Prague a mystical reputation that persists in part to this day, with Alchemists’ Alley on the grounds of Prague Castle, a popular visiting place and tourist attraction.

Rudolf is also the ruler in many of the legends of the Golem of Prague, which added to his occult reputation.

In Roman mythology, Vertumnus was the god of seasons, change, and growth, as well as gardens and fruit trees.

Vertumnus could change his form at will, and using this power, he seduced Pomona, the goddess of fruitful abundance in ancient Roman religion and myth.

In the myth narrated by Ovid, she scorned the love of the woodland gods but married Vertumnus after he tricked her, disguised as an older woman.

By disguising himself, he was able to gain entry to Pomona’s orchard and seduced her by narrating to her a warning of the dangers of rejecting a suitor.

Giuseppe Arcimboldo (1527 – 1593) was a painter best known for creating imaginative portrait heads made entirely of objects such as fruits, vegetables, flowers, fish, and books.

He was a conventional court painter of portraits for three Holy Roman emperors in Vienna and Prague. He also painted religious subjects and, among other things, a series of colored drawings of exotic animals in the imperial menagerie.

However, today he is best known for his symbolical compositions of fruits, animals, landscapes, or various objects arranged into human forms.

The still-life portraits were intended as whimsical curiosities to amuse the court. His art also engaged with Renaissance Neo-Platonism or other intellectual trends of the day.

Painter Arcimboldo and His Unique Style of Portraiture

“Constancy is the complement of all other human virtues.”
– Giuseppe Mazzini