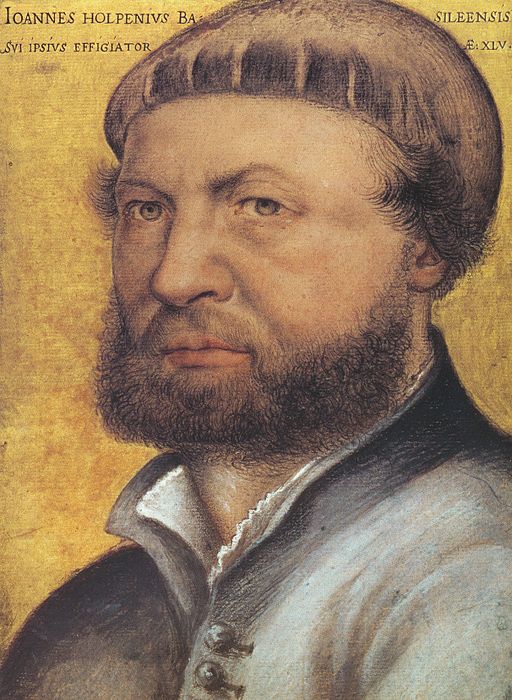 Hans Holbein the Younger, worked in a Northern Renaissance style and is recognized as one of the greatest portraitists of the 16th century. He also produced religious art, satire, and Reformation propaganda.

He is called “the Younger” to distinguish him from his father, Hans Holbein the Elder, an accomplished painter of the Late Gothic school.

Holbein traveled to England in 1526 and was welcomed into the humanist circle of Thomas More, where he quickly built a high reputation. Later, he also worked under the patronage of Anne Boleyn and Thomas Cromwell.

By 1535, he was King’s Painter to King Henry VIII. His portraits of the royal family and nobles are a historical visual record of the court during the years when Henry was asserting his supremacy over the English church.

Holbein’s fame is based in no small degree for his portraits have become cultural icons. He created the most memorable images of Henry VIII and Holbein’s portraits of other historical figures, such as Erasmus, Thomas More, and Thomas Cromwell.

A Virtual Tour of Hans Holbein the Younger

“Sir Thomas More” by Hans Holbein the Younger, was created shortly after Holbein arrived in London.

Holbein’s friend, the Dutch humanist Desiderius Erasmus, recommended that Holbein befriend More, who was then a powerful, knighted speaker at the English Parliament.

The Soviet Union honored him for his attitude toward property rights expressed in his book Utopia, which is about the political system of an imaginary, ideal island nation, published in 1516.

More opposed the Protestant Reformation, and he also fought the king’s separation from the Catholic Church.

He refused to acknowledge King Henry VIII as Supreme Head of the Church of England and the annulment of his marriage to Catherine of Aragon.

After refusing to take the Oath of Supremacy, he was convicted of treason and beheaded. Museum: Frick Collection, New York

Portrait of Henry VIII of England

Holbein was a German and Swiss artist who traveled to England in 1526 and was welcomed into the humanist circle of Thomas More, where he quickly built a high reputation.

Holbein had deftly survived the downfall of his first two high patrons, Thomas More and Anne Boleyn, but Cromwell’s execution damaged his career.

Although he managed to keep his position as King’s painter, his career never recovered. The site of Holbein’s grave is unknown and may never have been marked. Museum: Thyssen-Bornemisza Museum

“The Ambassadors” by Hans Holbein the Younger is a masterpiece of grand size but highly detailed and full of symbolism.

Created in the Tudor Period in the same year Elizabeth I was born, this double portrait depicts two wealthy, educated, and powerful men.

On the left is Jean de Dinteville, French ambassador to England. On the right is Georges de Selve, bishop of Lavaur, who acted on various occasions as ambassador to the Emperor, the Venetian Republic, and the Holy See.

In the foreground is the distorted image of a skull, which is a classic Renaissance image with a universal message of human mortality.

When this image is viewed from a point at the extreme right of the picture, the distortion is corrected. The skull looks normal.

Dinteville, who commissioned the painting and whose personal motto was “remember thou shalt die,” may have requested the hidden skull was a symbol of the inevitability of death. Museum: The National Gallery, London 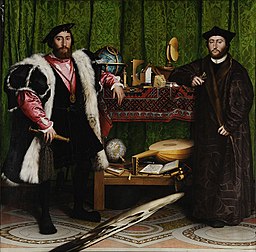 “Portrait of Thomas Cromwell” by Hans Holbein the Younger, depicts Cromwell when he was around 48 years old. It is one of two portraits Holbein painted of Cromwell. The original panel was lost. However, three versions of this painting survive.

Thomas Cromwell (1485 – 1540) was a lawyer and statesman who became a confidant of Henry VIII, assuming the roles of vice-regent, Lord Chancellor, lord high chamberlain, among others.

A shrewd politician, he was aware of the effect of propaganda and commissioned Holbein to produce images positioning him as a reformist and royalist.

Cromwell engineered the king’s divorce from Catherine of Aragon and became a significant force in the Tudor court.

Unfortunately, he fell from power because he had arranged the king’s marriage to the German princess, Anne of Cleves. Henry found his new bride unattractive, and it turned into a disaster for Cromwell.

The marriage was unpopular, and this allowed his many enemies the chance to bring charges of treason, forcing his eventual arrest and executed for treason and heresy on Tower Hill in 1540. Museum: Frick Collection, New York

Self-Portrait by Hans Holbein the Younger shows the artist with a steady gaze that suggests he was looking into a mirror.

Holbein died not long after completing this self-portrait, most probably of the plague. The gold background is of a later date.

The inscription, although late in date,  records an earlier one, of which slight traces remain. Museum:  Uffizi Gallery

Hans Holbein the Younger: A collection of 119 paintings

A Virtual Tour of Artists You Should Know

Hans Holbein The Younger: A collection of 217 sketches

“Uneasy lies the head that wears a crown.”
– Henry IV by Shakespeare