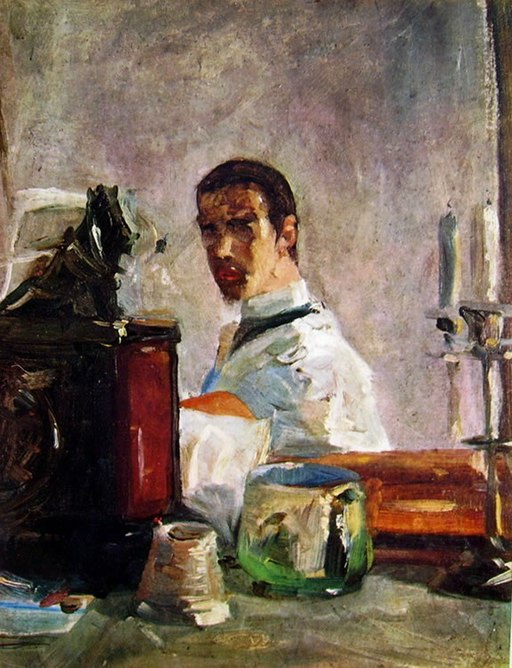 His immersion in the colorful and theatrical life of Paris in the late 19th century allowed him to produce a collection of enticing and provocative images of the modern and decadent scenes of those times.

Toulouse-Lautrec is counted amongst the best-known painters of the Post-Impressionist period.

When the Moulin Rouge cabaret opened, Toulouse-Lautrec was commissioned to produce a series of posters. Although he had a regular and comfortable income from his family, making posters offered him a living of his own.

Other artists looked down on the work, but he ignored them. The cabaret reserved a seat for him and displayed his paintings.

Among the well-known works that he painted for the Moulin Rouge and other Parisian nightclubs are depictions of famous singers and dancers.

Unfortunately, Toulouse-Lautrec was mocked for his short stature and physical appearance, which led him to abuse alcohol.

In addition to his growing alcoholism, Toulouse-Lautrec also frequented prostitutes. He was fascinated by their lifestyle and incorporated those characters into his paintings.

In 1901, at the age of 36, he died from complications due to alcoholism and syphilis.

In his less-than-20-year career, Toulouse-Lautrec created over a thousand canvas paintings, watercolors, prints, and posters. Also, he left over five thousand drawings.

His style was influenced by the Impressionists and by the classic Japanese wood prints, which became popular in art circles of his time in Paris.

At the Moulin Rouge, The Dance

It portrays two dancers dancing the can-can in the middle of the crowded dance hall. An inscription by Toulouse-Lautrec on the back of the painting reads: “The instruction of the new ones by Valentine the Boneless.”

This inscription indicates that the dancing man is Valentin le désossé, a well-known dancer at the Moulin Rouge, and he is teaching the newest addition to the cabaret.

Featured in the painting are many aristocratic people such as poet Edward Yeats, the club owner, and Toulouse-Lautrec’s father.

Henri de Toulouse-Lautrec immersed himself in the colorful and theatrical life of Paris in the late 1800s, which allowed him to produce a collection of elegant and provocative images of the modern and decadent life of Paris at the time. Museum: Philadelphia Museum of Art

Toulouse-Lautrec first encountered her when he began to attend the theater regularly, in 1893. His infatuation with her peak when she starred in the revival of Hervé’s “Chilpéric.”

Toulouse-Lautrec visited this operetta over twenty times, arriving just in time to see Lender dance the bolero in the second act. This painting shows Lender performing a bolero from the operetta.

However, his admiration was not reciprocated; she is said to have remarked.“What a horrible man! He is very fond of me …., but as for the portrait, you can have it!”  Museum: National Gallery of Art, DC

“La Goulue arriving at the Moulin Rouge” by Henri de Toulouse-Lautrec depicts La Goulue, which was the stage name of Louise Weber (1866 – 1929). This French can-can dancer was a star of the Moulin Rouge, a famous cabaret in Paris, near Montmartre.

La Goulue was the most successful can-can dancer of her time. Weber became known as La Goulue because, as an adolescent, she was known for guzzling cabaret patrons’ drinks while dancing.

She also was referred to as the Queen of Montmartre. Museum: Museum of Modern Art, NYC – MOMA

“Quadrille at the Moulin Rouge” by Henri de Toulouse-Lautrec depicts a woman starting a dance that was fashionable in late 18th- and 19th-century Europe.

Usually, it is performed by couples and is related to square dancing. The Moulin Rouge cabaret quickly became a great success because it offered a mixture of unique factors.

It had a revolutionary architecture for the auditorium that allowed rapid changes of décor and where everyone could mix.

The festive champagne evenings allowed people to dance and be entertained thanks to amusing acts that changed regularly.

A new dance that became more and more popular, the Can-can, where dances danced in rhythm in titillating costumes. Museum: National Gallery of Art, DC

This painting portrays a group of three men and two women sitting around a table situated on the floor of the nightclub.

In the background of this group is a self-portrait of Toulouse-Lautrec himself, who can be identified as the shorter stunted figure next to his taller companion.

In the right foreground, sitting at a different table is the profile of a dancer, with her face lit in a distinctive light.

In the background on the right are a Moulin Rouge dancer and another woman. All the people whose faces are visible have been identified as regular patrons of the Moulin Rouge and acquaintances of the Toulouse-Lautrec. Museum: Art Institute of Chicago

“At the Moulin-Rouges, Two Women Waltzing” by Henri de Toulouse-Lautrec depicts actual people from the Parisian nightlife at Montmartre at the end of the 19th century.

The female clown Cha-U-Kao is one of the women dancing, and the singer Jane Avril is behind her, with her back to the spectator.

Toulouse-Lautrec imbued his personal experience in his paintings set at the Moulin-Rouge. Although he was born into an aristocratic family, he identified himself with people from all parts of French society. Museum: National Museum in Prague

“Portrait of Vincent van Gogh” by Henri de Toulouse-Lautrec is an 1887 chalk pastel on cardboard depicting the then-unknown Dutch artist who had recently arrived in Paris. Van Gogh is shown leaning forwards at a table in a bar, with a glass of absinthe, as if in conversation.

This colorful Impressionist work of blues, oranges, and yellows, shows Van Gogh during the time he was living with his brother, Theo.

Toulouse-Lautrec met Vincent van Gogh when they were both taking lessons at the Atelier or open studio of Fernand Cormon in Paris from 1886 to 1887.

Van Gogh studied at Fernand Cormon’s atelier studio in 1886, where he was introduced to Henri de Toulouse-Lautrec.  They frequently met at Julien “Père” Tanguy’s paint shop, which is where Paul Cézanne’s paintings were displayed. Museum: Van Gogh Museum

“The Bed the Kiss” by Henri de Toulouse-Lautrec is a painting from between 1892 and 1893, which depicts two women sharing a bed. It is one of several paintings around similar dates showing women in bed.

Toulouse-Lautrec became fascinated by the nightlife in Paris. Through the 1890s, he spent more and more time painting everyday scenes of life in the brothels.

He was commissioned to produce paintings for the salon at a brothel on the rue d’Ambroise. He spent time observing the brothel, its residents and visitors, while they worked and at quieter moments, and made sixteen portraits of the prostitutes.

Our “In Bed” by Henri de Toulouse-Lautrec Tour includes:

Need To Know About: Toulouse Lautrec

“The greatest thing you’ll ever learn is just to love and be loved in return.”

“I have tried to do what is true and not ideal.”

“Love is when the desire to be desired takes you so badly that you feel you could die of it.”

“Everywhere and always ugliness has its beautiful aspects; it is thrilling to discover them where nobody else has noticed them.”

“I paint things as they are. I don’t comment.”

“Marriage is a dinner that begins with dessert.”

“I don’t belong to any school. I work in my corner. I admire Degas.”

“Jealousy will drive you mad.”

“Of course, one should not drink much, but often.”
– Henri de Toulouse-Lautrec