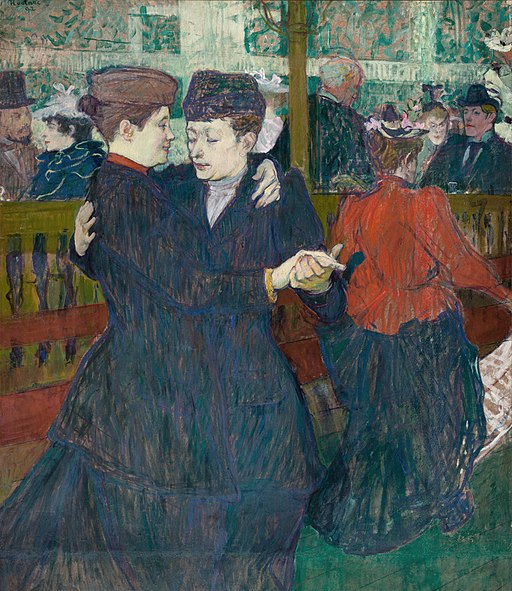 “At the Moulin-Rouges, Two Women Waltzing” by Henri de Toulouse-Lautrec depicts actual people from the Parisian nightlife at Montmartre at the end of the 19th century.

The female clown Cha-U-Kao is one of the women dancing, and the can-can dancer Jane Avril is behind her, in the red jacket with her back to the spectator.

Cha-U-Kao was a French entertainer who performed at the Moulin Rouge and the Nouveau Cirque in the 1890s.

Her stage name was also the name of a boisterous popular dance, similar to the can-can, which came from the French words meaning “noise” and “chaos.” She was a gymnast before she worked as a Parisian female clown.

Cha-U-Kao soon became one of Henri de Toulouse-Lautrec’s favorite models. He was fascinated by this woman who dared to choose the classic male profession of clowning and was not afraid to declare that she was a lesbian openly.

Toulouse-Lautrec sketched Cha-u-Kao with her partner, and these sketches would be included in his portfolio, “Elles.” Her partner was Gabrielle the Dancer, another performer and model for Toulouse-Lautrec.

Although Toulouse-Lautrec was born into an aristocratic family, he identified himself with people from all sections of French society. Toulouse-Lautrec imbued his personal experience in his paintings set at the Moulin-Rouge.

The Moulin-Rouge was founded in 1889, a few years before this painting. It is close to Montmartre in Paris, with a red windmill on its roof as its trademark. Moulin Rouge is best known as the birthplace of the modern form of the can-can dance.

Originally introduced as a seductive dance by the courtesans who operated from the site, the can-can dance revue evolved into a kind of entertainment of its own and led to the introduction of cabarets across Europe.

Today, the Moulin Rouge is a tourist attraction, offering musical dance entertainment for visitors worldwide. The club’s decor still contains much of the romance of the end of 19th century France.

Jane Avril (1868 – 1943) was a French can-can dancer made famous by Henri de Toulouse-Lautrec through his paintings.

The Moulin Rouge nightclub hired Avril in 1889. Within a few years, she headlined at the Jardin de Paris, one of the major cafés-concerts on the Champs-Élysées.

To advertise the extravaganza, Henri de Toulouse-Lautrec painted her portrait on a poster that elevated her stature in the entertainment world.

The can-can’s popularity became such that Avril traveled with a dance troupe to perform in London in 1896.

Henri Marie Raymond de Toulouse-Lautrec-Monfa (1864 – 1901), also known as Henri de Toulouse-Lautrec, was a French painter, printmaker, caricaturist, and illustrator whose immersion in the colorful and theatrical life of Paris in the late 19th century.

When the Moulin Rouge cabaret opened, Toulouse-Lautrec was commissioned to produce a series of posters. Although he had a regular and comfortable income from his family, making banners offered him a living of his own.

Other artists looked down on the work, but he ignored them. The cabaret reserved a seat for him and displayed his paintings. Among the well-known works that he painted for the Moulin Rouge and other Parisian nightclubs are famous singers and dancers’ depictions.

He was fascinated by their lifestyle and incorporated those characters into his paintings. In 1901, at the age of 36, he died from complications due to alcoholism and syphilis.

Toulouse Lautrec at the Moulin Rouge