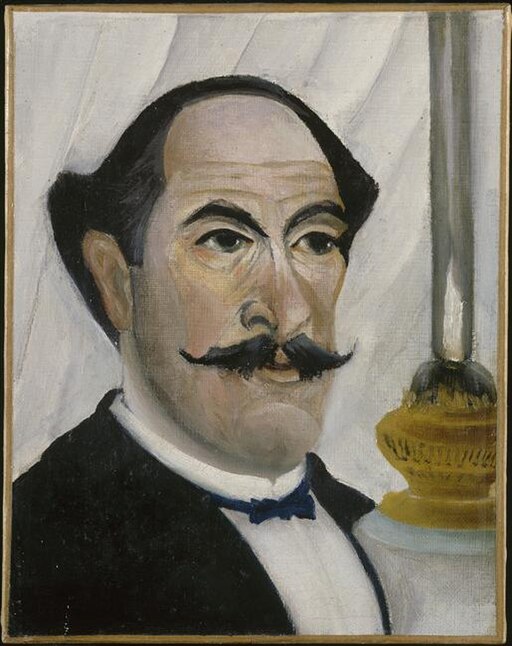 Henri Rousseau (1844 – 1910) was self-taught and developed a style that lacked traditional training, with its absence of strict proportions, a one-point perspective, and with the use of sharp, often unnatural colors.

Many critics who ridiculed his work disparaged Rousseau’s style. Rousseau, however, aspired, in vain, to common acceptance.

Many observers commented that he painted like a child, but the work shows sophistication with his unique style and technique. Following his funeral, the following epitaph was written by his friends and put on his tombstone:

We salute you, Gentle Rousseau; you can hear us.
Let our luggage pass duty-free through the gates of heaven.
We will bring you brushes, paints, and canvas.
That you may spend your sacred leisure in the
light and Truth of Painting.
As you once did, my portrait facing the stars, lion, and the gypsy.

Ridiculed during his lifetime by critics, he came to be recognized as a self-taught genius whose work exerted a significant influence on several generations of avant-garde artists.

A Highlights Tour of Henri Rousseau

“The Customs Post” by Henri Rousseau depicts the Paris Customs Office’s uniformed employees at an octroi or toll gate to enter Paris.

The Paris Customs Office charged a tax, called l’octroi, on most goods brought into the city. A wall surrounded Paris, and everyone entered the city through one of the gates.

In the late 1800s, there were 66 octroi gates into the city, and about 2,000 officers were employed; Henri Rousseau was one of them.

The citizens of Paris strongly disliked the octroi, but the government needed the money. The old octroi buildings can still be seen in Paris today. Museum: Courtauld Gallery

The Sleeping Gypsy by Henri Rousseau is a fantasy depiction of a lion musing over a sleeping woman on a moonlit night.

Rousseau portrays an African Gypsy wearing a colorful costume, sleeping in the desert with an Italian stringed instrument and a water jar.

This painting has different elements of importance to different cultures. However, Rousseau decides to mix them all into a unique image.

Rousseau described his picture as: “A wandering Negress, a mandolin player, lay down with her jar beside her and overcome by fatigue in a deep sleep.

A lion chance to pass by picks up her scent yet does not devour her. There is a moonlight effect, very poetic.” Museum: Museum of Modern Art (MoMA), NYC

The Repast of the Lion

“The Repast of the Lion” by Henri Rousseau depicts a feeding lion in a lush and exotic jungle. This painting expands upon Rousseau’s other artworks depicting surprised animals in jungle scenes.

The foliage represented in the art was inspired by the artist’s study of Paris’ botanical gardens and the many jungle pictures he collected.

The critics derided Henri Rousseau’s work during his lifetime and after his death. Still, he won a following and support among his contemporaries: Pablo Picasso, Henri Matisse, and Paul Klee, who were admirers of his work.

Tiger in a Tropical Storm

“Tiger in a Tropical Storm” by Henri Rousseau was the first of the artist’s jungle paintings and showed a tiger, illuminated by a flash of lightning, preparing to pounce on its prey during a raging gale.

Rousseau had never left France to see real jungles. Still, his inspiration came from Paris’ botanical gardens, which included zoological galleries, and from geographic illustrations in prints and books.

The tiger’s prey is beyond the canvas, so it is left to the viewer’s imagination to decide what is the victim. Museum: The National Gallery, London

“The Dream” by Henri Rousseau is one of 25 paintings by Rousseau with a stylized jungle theme. The jungle plants are based on Rousseau’s observations at the Paris Museum of Natural History and its Jardin des Plantes.

It features a portrait of Rousseau’s Polish mistress from his youth, lying naked on a divan. She gazes over a landscape of lush jungle foliage, including lotus flowers, and animals including birds, monkeys, an elephant, a lion and lioness, and a snake.

The Dream is the largest of the jungle paintings. It was his last completed work, a few months before his death in 1910. Museum: Museum of Modern Art (MoMA), NYC

“Tropical Landscape: American Indian Struggling with a Gorilla” by Henri Rousseau is a dreamlike scene where imagination dictated the compositions rather than traditional perspective and scale forms.

Rousseau studied exotic plants and animals in Paris’s botanical gardens and zoos, as he had never traveled outside of France.

Struggle between Tiger and Bull

“Struggle between Tiger and Bull” by Henri Rousseau depicts an idealized “primitive” fantasy of a tiger attacking a bull in a jungle setting.

This painting is similar to Rousseau’s other artworks depicting animals amongst foliage inspired by the artist’s study of Paris’ botanical gardens and the many jungle pictures he collected.

“The Equatorial Jungle” by Henri Rousseau was ridiculed during much of his life as a naïve painting. Rousseau’s technique included controlled brush strokes, which made each object in the painting appear outlined.

Eventually, with Picasso, Matisse, and other artists’ endorsement, Rousseau gained the recognition he craved.

Today he is known as a self-taught genius famous for his imaginary jungle scenes.  – National Gallery of Art, DC

Combat of a Tiger and a Buffalo

Rousseau’s imaginative visions and the technique of painting was unique. He applied one layer at a time, creating multiple layers, and he carefully blended his brushstrokes to create a smooth surface.

“The Snake Charmer” by Henri Rousseau depicts a woman with glowing eyes playing the flute in the moonlight by the edge of a dark jungle with a snake extending toward her from a nearby tree.

Horse Attacked by a Jaguar

“Horse Attacked by a Jaguar” by Henri Rousseau is jungle paintings depicting a Jaguar attacking a white horse painted with meticulous care.

The horse stares transfixed in a strange contrast of white against lush green.

Rousseau’s fantastic scenes heralded Surrealism and were built up meticulously in layers, using many green shades to capture the lush abundance of the jungle. Museum: State Pushkin Museum of Fine Arts

“Beauty is the promise of happiness.”

“What wisdom can you find that is greater than kindness.”

Henri Rousseau: A collection of  paintings