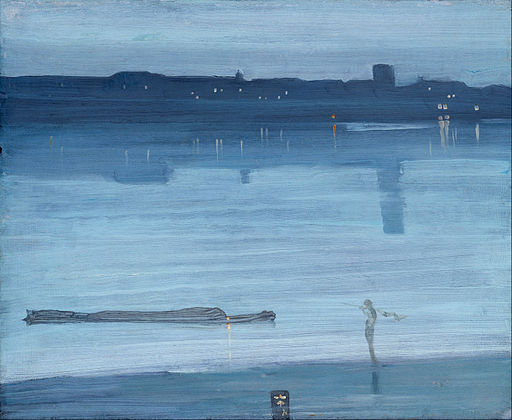 “Nocturne: Blue and Silver – Chelsea” by James Abbott McNeill Whistler is the artist’s earliest in his London Nocturnes series.

This painting is the first of thirty-two nighttime landscapes that Whistler began calling “nocturnes.” His biographers describe his process as:

“His method was to go out at night[…] stand before his subject and look at it,
then turn his back on it and repeat to whoever was with him the arrangement,
the scheme of color, and as much of the detail as he wanted.
The listener corrected errors when they occurred, and, after Whistler had looked long enough,
he went to bed with nothing in his head but his subject.
The next morning, if he could see upon the untouched canvas the picture, he painted it;
if not, he passed another night looking at the subject.”

All the nocturnes were painted with extremely fluid paint that allowed Whistler to build thin layers of luminous color.

The liquid mixture was so thin that the wet canvas had to be painted flat, so the paint would not run.

Whistler’s ‘butterfly’ signature is in the center of the bottom edge of the painting, imitating a “chop” seal as an homage to the influence of traditional Japanese art.

Nocturne painting is a term coined by James Abbott McNeill Whistler to describe his painting style that depicts scenes evocative of the night and of subjects that appear in a veil of light.

In broader usage, the term has come to refer to any painting of a night scene. Whistler used the term within the title of his works to represent paintings with a dreamy mood.

He also titled works using other terms associated with music, such as a “symphony,” “harmony,” “study,” or “arrangement,” to emphasize the tonal qualities and the composition.

The use of the term “nocturne” can be associated with the Tonalism movement of American artists of the late 19th century and early 20th century.

Tonalism was an artistic style that emerged in the 1880s when American artists began to paint landscape forms with an overall tone of colored atmosphere or mist.

The movement was characterized by a soft, diffused light, muted tones, and faint outlined objects.