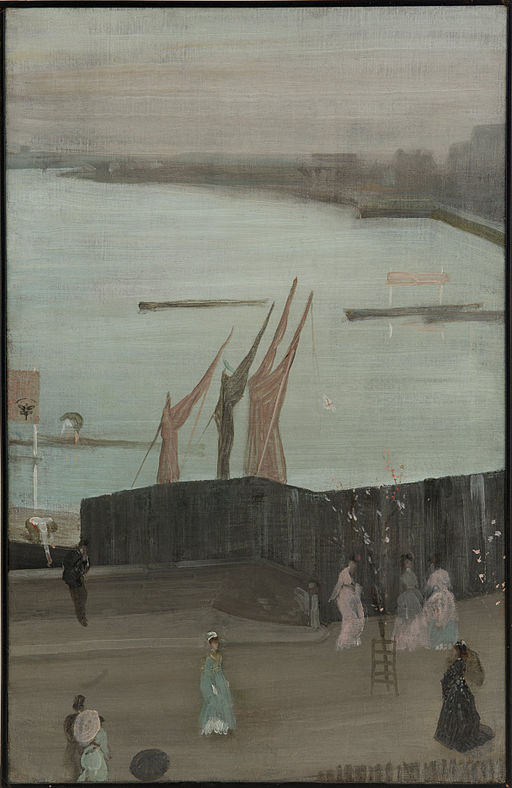 “Variations in Pink and Grey: Chelsea” by Whistler

In the 19th century, the area became a Victorian artists’ colony. Chelsea once had a reputation as London’s bohemian quarter, the haunt of artists, radicals, painters, and poets.

There was an unusually large concentration of artists around Cheyne Walk and Cheyne Row, where the Pre-Raphaelite movement had its heart.

While Whistler was living in Chelsea, in 1877, Whistler sued the critic John Ruskin for libel after the critic condemned his painting “Nocturne in Black and Gold: The Falling Rocket.”

The jury eventually reached a verdict in favor of Whistler but awarded a mere farthing in nominal damages, and the court costs were split.

The cost of the case, together with huge debts from building his residence “The White House” in Tite Street, Chelsea, bankrupted him in 1879, resulting in an auction of his work, collections, and house in Chelsea.

Chelsea is an area of South West London; from 1900 and until the creation of Greater London in 1965, it formed the Metropolitan Borough of Chelsea in the County of London.

Chelsea’s exclusivity resulting from its high property-prices historically resulted in the coining of the term “Sloane Ranger” in the 1970s to characterize its residents.

Chelsea is home to one of the largest communities of Americans living outside the United States.

Before the 1900s, Chelsea once had a reputation as London’s bohemian quarter. Chelsea was home to writers such as George Meredith, Algernon Charles Swinburne, and Thomas Carlyle.

In a book, Bohemia in London by Arthur Ransome, published in 1907, there are some fascinating accounts of bohemian goings-on in the quarter.

Variations in Pink and Grey: Chelsea

Virtual Tour of the Freer Gallery of Art

“You shouldn’t say it is not good. You should say, you do not like it, and then, you know, you’re perfectly safe.”
– James Abbott McNeill Whistler