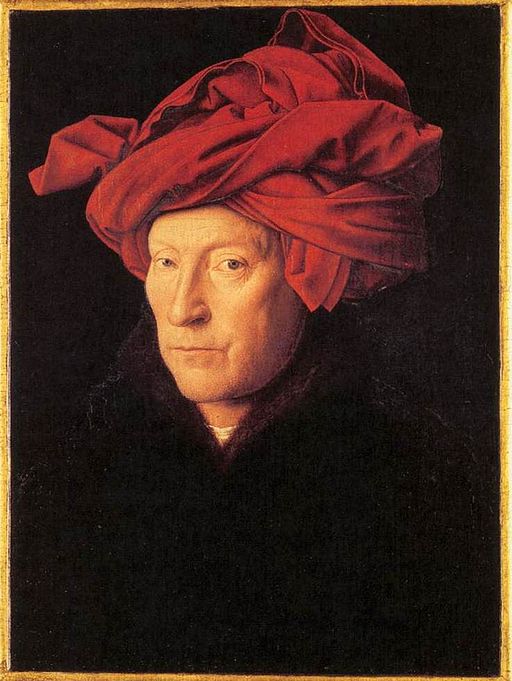 He was employed as a painter to the ruler of Holland and later as a court painter to the Duke of Burgundy until he moved to Bruges in 1429, where he lived until his death.

He was highly regarded by the Duke of Burgundy and undertook several diplomatic visits abroad.

About 20 surviving paintings are attributed to him, as well as the Ghent Altarpiece and the illuminated miniatures of the Turin-Milan Hours.

Van Eyck’s work comes from the International Gothic style, but he soon eclipsed it, in part through a greater emphasis on naturalism and realism.

“Arnolfini Portrait” by Jan van Eyck is a full-length double portrait. It depicts the Italian merchant Giovanni di Nicolao Arnolfini and his wife in their home in the Flemish city of Bruges.

Arnolfini was a member of a merchant family from Lucca living in Bruges, as an agent of the Medici family. The couple is depicted in their prosperous home.

This masterpiece is considered one of the most original and sophisticated paintings in our heritage of early oil paintings.

This painting is famous for its elaborate symbolism, detailed rendering, geometric perspective, use of light, and for the various detailed elements in the picture, such as the mirror, to create a realistic space.

The vibrant colors highlight the material wealth and opulence of the subject’s world. Van Eyck’s quest for realism suggests he used a magnifying glass to paint the minute details.

Details such as the highlights inf the amber beads hanging beside the mirror and the smaller pictures within the mirror’s surround. Museum: The National Gallery, London

The Crucifixion and The Last Judgment Diptych

The Crucifixion and Last Judgment Diptych consist of two small painted panels is attributed to the Early Netherlandish artist Jan van Eyck, with parts finished by members of his workshop.

This diptych is renowned for its intricate and highly detailed iconography, and the technical skill evident in its completion. It was executed in a small format and was commissioned for private devotion. The original gilt frames contain Biblical passages in Latin.

The left-hand panel depicts the Crucifixion with a view of Jerusalem in the distance. It shows Christ’s followers grieving in the foreground, soldiers, and spectators surrounding the cross in the mid-ground, and three crucified bodies in the top third of the painting.

Crucifixion was a painful method of capital punishment in which the victim is tied or nailed to a large wooden beam and left to hang for several days until eventual death.

The crucifixion of Jesus is a central narrative in Christianity, and the cross is the primary religious symbol for many Christian churches. Museum: Metropolitan Museum of Art – MET

“Virgin and Child with Canon van der Paele” by Jan van Eyck depicts the Virgin Mary enthroned at the center of the semicircular space, with the Christ Child on her lap.

The Virgin and Child are set in a rounded church with side ambulatories. Mary is occupying the area where the altarpiece would usually be positioned. Mary offers the child Jesus a bouquet while he plays with a Rose-ringed Parakeet.

St. Donatian stands to her right, dressed in elaborately colorful blue and gold vestments and miter holding his accouterments. Saint George, stands to her left dressed as a military knight in spectacular armor.

The painting’s donor, Joris van der Paele, is kneeing dressed in white. He is dressed in the finery of a medieval canon, including white surplice, as he piously reads from a book of hours. Museum:   Groeningemuseum, Bruges, Belgium

The altarpiece, as one of the more coveted pieces of art history, has been the victim of 13 crimes since its installation, and seven thefts.

“Portrait of Margaret van Eyck” by Jan van Eyck depicts the artist’s wife and is one of the earliest European artworks to represent a painter’s spouse.

The sitter’s unidealized representation and her direct gaze create an intimate and informal atmosphere. Her left eye shows evidence of a squint. This natural portrayal suggests that the painting was created to mark an occasion and for private rather than public viewing.

Painted in 1439 using oil on wood, it shows Margaret when she was around 33 years of age. It is thought to be a pendant panel to Jan van Eyck’s likely self-portrait now in the National Gallery in London. Museum:  Groeningemuseum, Bruges, Belgium

Portrait of a Man in a Turban – Self Portrait

“Portrait of a Man in a Turban” by Jan van Eyck, from 1433, has an inscription at the top of the panel, which reads “as I/Eyck can.” This inscription was a typical autograph for van Eyck, but unusually large and prominent in this portrait painting.

The prominence of the signature, together with the man’s unusually direct and confrontational gaze, this portrait is believed to be a self-portrait.

It has been proposed that van Eyck created the portrait for his workshop to display his abilities to clients. Museum: National Gallery, London

Portrait of a Man in a Turban